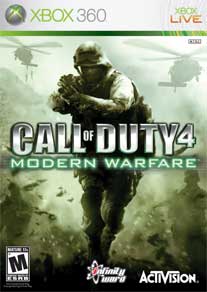 The Call of Duty series of videogames first distinguished itself in service by bringing really impressive and memorable action sequences to the shooting game genre labelled ‘first-person shooters’, or FPS. Often, these sequences would also convey a real sense of overwhelming odds, or terror, or both. Call of Duty 4: Modern Warfare, despite completely shedding the World War II-themed skin that’s served it so well over the years for this sequel, brings those qualities back in spades.

From the very first steps you take in this game, the pressure is on. But so is the excitement. I don’t think we’ve had so much fun in the opening minutes of a game as with Call of Duty: Modern Warfare (or ‘CODMW’, as it’s known to members of the Royal Australian Society of Compulsive Acronym Lovers, or ‘RASCALs’). It’s so much fun, in fact, that we replayed the part in a training facility where you’re asked to zip down a rope, crash through a series of rooms and take out all the enemies with a stopwatch running at least 10 times, trying desperately to improve our time – and that was only the training mission at the beginning of the first level!

From there, you’re thrown in at the deep end, joining an experienced SAS troop as the new boy and dropped onto a ship at sea. We won’t say any more on that, but again the mission is one of the most heart-stoppingly tense affairs we?ve ever witnessed in a game, the tension due largely to the methodic but relentless methods of your SAS team as you struggle to keep up and still get some kills in!

Style-wise, COD: Modern Warfare is of the ‘gritty, realistic’ variety, much like competitor Tom Clancy’s Ghost Recon: Advanced Warfighter (or ‘TCGRAW’, OK, we’ll stop that now!) and looks generally superb – an exception perhaps being some of the movies, which look disappointing. The level design is varied and generally excellent, and there are moments, both online and offline, that feel incredibly satisfying.

That’s all the good stuff. However, once you ramp up the difficulty level from ‘Easy’ or ‘Normal’ and try your hand at ‘Hardened’ or ‘Expert’, you’re liable to get that hand blown off pretty quickly. Not, unfortunately, because your skills are up to the challenge, in most cases, but because the game play design for this title is a throwback to the ‘spawning point’ style. This basically means that, rather than be part of a living game world where all the characters are active and present all over the game maps, reacting only when you appear, the enemies in Call of Duty: Modern Warfare simply pop into existence once you pass certain ‘trigger’ points in the maps. And if you go back, and re-enter a section, they appear again, and again, making for a very artificially difficult challenge. Increasing that challenge, too, is that on the hardest difficulty level, the enemies go mental, losing all grip on reality. This is most apparent in one section of a level where you storm a building full of enemies, and their reaction is to lob about 100 grenades a minute over in your general direction to ‘flush’ you out. Hundreds of grenades. Inside a building. Clearly none of them even passed basic training.

This treatment of difficultly levels mars what would otherwise be a near-perfect videogaming experience, so we say go grab a copy, keep it on ‘Regular’ difficulty level and have yourself a ball.

The price shown above is for the Xbox 360 platform. Full pricing details are:

We’ve got a video preview of Call for Duty 4: Modern Warfare -Â click the graphic below to watch the video.