Call of Juarez 2: Bound in Blood 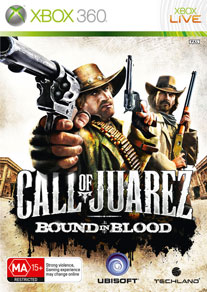 A wild-west themed first person shooting game from Techland, Call of Juarez 2: Bound in Blood follows the fortunes of three brothers who find themselves bickering while fighting in the American Civil War and then deserting to carry on their dispute in a number of suitably sandy and dusty locations across the good ol’ south. With inspiration drawn from every gunslinging spaghetti western in the book, ‘Bound in Blood’ is not just a great cowboys and indians game, but a great game full stop and one of the best releases so far this year.

Bearing not a few similarities to the excellent ‘Brothers in Arms’ series from the same publisher, Ubisoft, and an eerily-similar title to the second in that series (Brothers in Arms: Earned in Blood’), Bound in Blood is nevertheless developed by a different team from the WWII game. It plays much the same way, however, trooping from one conflict to the next, and has similar detail, right down to meeting certain characters in game who then assume an odd, hunched over position and scurry off to the next point of interest, stopping every so often to make sure you’re following them.

These conflicts are entertaining, however, with accurately-modeled 19th century weaponry lending an air of authenticity to the gunfights and the player able to choose between the two principal brothers, Ray and Thomas, for a fierce, gung-ho attacking style or stealthier options, respectively. A neat slow-mo mechanic kicks in as reward for good sharpshooting, allowing the player to blast multiple targets in the blink of an eye, although the system is different for each character and we found it much harder to execute this maneuver when playing as Thomas.

With a game engine suited to creating wide, open spaces, the developer has done a good job in bringing the wild west to your living room – however the existence of the more ‘free roaming’ gameplay sections seem superfluous. They’re no more, really, than a method of gaining more gold (to buy or upgrade weapons) and the mostly uninhabited landscapes simply mean you’re riding around on your (really badly modelled) horsey for long, uneventful stretches to no end.

There are a few other problems – not least Ubisoft’s insistence on implementing their patented and ridiculous ‘frustrato-saver’ checkpoint system that leaves it far too long between saves and dumps you back out to ‘re-enjoy’ 15 minutes of play time to get back to where you failed earlier. And where’s the co-op campaign option?

But this really doesn’t matter, in the event, because the gameplay in Bound in Blood is fun, the story is imaginative, the voice acting good (but not the corresponding lip synching) and even the quickdraw duelling surprisingly tense. You look like a cowboy, you feel like a cowboy and you kick ass like a cowboy dressed like Clint Eastwood. Ace.