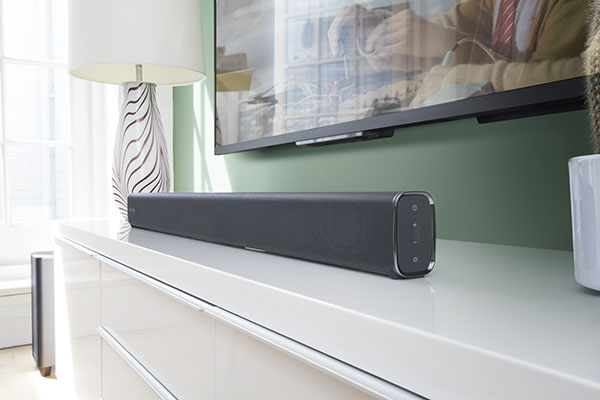 Now, this is something new. The Cambridge Audio TVB2 soundbar is a convenient TV sound solution from a renowned British brand. What’s startling is the low price.

Even before I took the Cambridge Audio TVB2 out of the box, I was surprised to see that the subwoofer connected wirelessly. That’s always convenient since it gives much more flexibility in placement. I figured that the soundbar would have just an optical input and an analogue one. You’d plug the optical output from your TV into it and off it’d go.

But I was wrong. Yes, it has both an optical and an analogue input, but it also has three HDMI inputs and an ARC-capable HDMI output.

ARC? That stands for Audio Return Channel. With that feature – and it’s supported by just about all recent TVs – the same HDMI cable that carries the video to the TV can carry sound back to the soundbar. When you switch to the TV’s internal TV tuner, the sound comes out the soundbar rather than the TV’s speakers. Likewise, if you have a smart TV and you’re watching Netflix.

You can also use Bluetooth to play music through the Cambridge Audio TVB2. The company doesn’t say what Bluetooth codecs it supports, and my phone didn’t report any advanced codecs, so it’s best to assume it relies on the standard SBC codec.

The soundbar is 880mm wide, 75mm tall and 46mm deep. It looked as though it wasn’t quite wide enough underneath my 65-inch TV. With a 55 incher it’d be a fine visual match.

Inside the soundbar are two 57mm “Balanced Mode Radiator” speakers. Cambridge Audio says that the “patented BMR speaker technology disperses your audio 180 degrees”. I guess that would overcome the tendency of higher frequencies to “beam” directly ahead when the speaker is relatively large.

The subwoofer has a 165mm speaker in the bottom, firing downwards. Little legs hold it clear from the floor. It stands 364mm tall, 128mm wide and 278mm deep. The top is attractively shiny.

Total system power is 120 watts. Standby power is less than four watts. The unit switches itself to standby after twenty minutes of no signal.

Cambridge Audio tosses in a bunch of useful accessories. There’s an optical digital audio cable and a HDMI cable. The latter is 1.2 metres long. The Cambridge Audio TVB2 is ready to connect to your TV, either way, out of the box. Also included is a 3.5mm analogue cable which you can use for an iPod, or perhaps a TV that doesn’t have optical or HDMI connections. And there’s a slim metal mount wall bracket so you can put the soundbar under a wall-mounted TV.

There’s also an infrared remote control included. If you use ARC to connect to your TV, you can use your TV’s remote to control the volume of the soundbar without doing anything special. But the soundbar can also learn to recognise volume up and down on your TV’s remote even if you’re not using ARC.

Setting Up the Cambridge Audio TVB2

If only everything were as easy to set up as the Cambridge Audio TVB2. Especially wireless units. The subwoofer is pre-paired with the soundbar, so there’s no fiddling around there. Once you apply power to both, they search for each other for a few seconds and then they’re connected.

I thought initially that the two insets on the back of the soundbar might be a bit tight for all the connections, but it turned out that things weren’t too crowded. None of the cables stressed any of the others. I switched on the TV, set it to “TV” (as opposed to one of the HDMI inputs) and a few seconds later sound was emerging from the soundbar and subwoofer. A couple of jabs on the subwoofer level buttons on the remote brought its level down by a couple of decibels, and it was done.

Except for one last connection. I wanted Bluetooth too. I decided to use the NFC – Near Field Communication – pairing function. Much of the time I find that to be no easier than pairing the usual way for the simplest of reasons. It’s often hard to find the NFC spot on the device you’re pairing with. There was no problem with that here. It was clearly marked in white on one end of the soundbar. A tap, an audible chirp, a touch on “Pair” when the phone asked what I wanted, and a few seconds later that was done. I started the phone’s music player going, and Led Zeppelin’s Houses of the Holy emerged from the soundbar and subwoofer.

The sound was really quite decent. Remarkably there’s even a traditional English “feel” to the sound, that slight mellowness that tends to make the speakers sound a little further away than they really are. The chimes at the opening of Santana’s third album, Abraxas, danced with surprising liveliness and depth. When the lead guitar swelled, the soundbar handled it nicely, and the two-note bass line was solid.

When pushed hard it coarsened up. Sticking with Abraxas, a slight veil came over the sound as I raised the volume to its maximum, and the volume on the phone to very close to its maximum. But, to be fair, sitting 2.7 metres from the soundbar my meter showed the music was peaking at close to 100 decibels SPL. That’s very loud.

With Bladerunner 2049 on UltraHD Blu-ray, the soundbar produced fine clarity on the dialogue and a surprisingly full performance of the Vangelis-like score. The subwoofer produced satisfying bass elements of the music, but do be aware that it may not produce the low frequency effects channel. At least, it didn’t for me.

I suspect that the unit only supports two-channel PCM sound. (That’s the standard digital sound of the kind found on CDs.) HDMI devices like this tell the things they’re connected to what they can handle. My Blu-ray player clearly decided that if it was converting Dolby Digital or whatever to two-channel PCM, then it shouldn’t include the low frequency effects. I think that might be the behaviour of most Blu-ray players.

There are four audio modes with buttons on the remote control: TV, Film, Voice and Music. They’re worth experimenting with. I generally stuck with Music throughout, but Voice worked well with things like the nightly news, reducing the bass and adding a little more coherence to the vocal tones.

The HDMI inputs all allowed UltraHD video to pass through. Even super bandwidth types that run at 60 frames per second rather than 24. Things like HDR and the advanced BT.2020 colour schemes came through to the TV, but Dolby Vision did not.

I remain startled at the pricing of this unit. Throw a lot more money at a sound system for your TV, and you can, of course, get better overall sound, and higher, cleaner volumes. But you’ll be hard put to surpass the versatility and performance of the Cambridge Audio TVB2 at anything near its price.