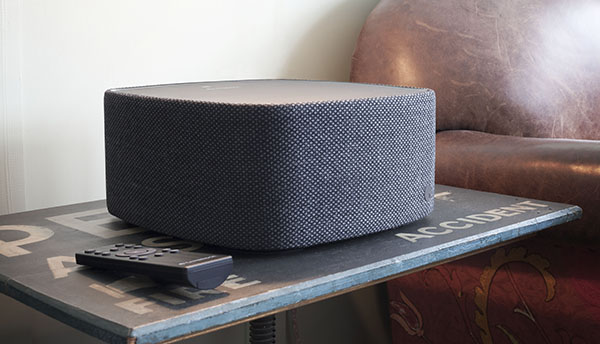 Don’t ignore the “(L)”. It’s an integral part of the name of the Cambridge Audio Yoyo (L) home audio system. There’s also a much smaller – and portable – Yoyo (S). And a medium-sized Yoyo (M). So, can the Yoyo (L) manage the “All-In-One” claimed for it?

Cambridge Audio is a British brand well known for audiophile quality equipment at (relatively) modest prices. As with many others of the kind, it has in recent times extended into more mass-market devices. That’s where the Yoyo (L) is positioned: as a quality single-box audio solution.

The Yoyo (L) does Bluetooth sound (of course), plays the audio from your TV, can play from an analogue audio device, and does network audio. The network audio is via Wi-Fi (there isn’t an Ethernet socket) and uses Chromecast protocols.

The Bluetooth can be paired using NFC. You connect to the network using the Google Home app. Neither DLNA nor Apple AirPlay is supported.

If you have an Apple-only home, you will probably not be getting full value out of this system. For those of us who use Android devices, it covers just about everything.

The speaker is 125mm tall and from the top looks like a square with rounded corners. It is 269mm deep by 269mm wide and weighs 4.25 kilograms. The front, sides and rear are covered in “nanosphere treated acoustic wool”. I have no idea what nanosphere treatment might do, but it looks nice in both the dark and light grey models.

Controls are on the top along with indicator lights. There’s also an infrared remote control. And of course, you can control network functions using various Android apps. The connections are in a cut-out in the bottom, so all you see in terms of wiring are the cables themselves emerging from underneath the Yoyo (L).

Provided with the Yoyo (L) is an analogue audio cable, and optical audio cable and an HDMI cable, so it’s right to go with no further expenditure.

Inside are six speaker drivers. It seems that there’s a tweeter and bass/midrange driver on the left side, on the right side and on the front. The idea is to spread sound widely throughout the room. Cambridge Audio doesn’t have much to say about the drivers. With the application of a little arithmetic and a close examination of images on the Yoyo (L) site, I’d estimate the larger drivers at 76mm and the smaller ones at 37mm. How much power is driving them isn’t indicated.

Cambridge Audio doesn’t specify any advanced codecs for Bluetooth, so it’s safe to assume that it uses only the standard Bluetooth SBC codec. My Google Pixel 2 XL phone reported no additional codecs.

Connecting to the TV

Huh? What’s that? You’re plugging the input on your TV into the input on the Yoyo (L)? That’s where the ARC bit comes in. ARC stands for Audio Return Channel. Even though it’s an input, it also sends the sound back down the cable from the TV to audio device. The idea is to allow you to use your sound system when watching regular TV using the same cable that normally takes the picture to the TV. It also works when you’re watching streaming video (e.g. Netflix, YouTube or Stan) on your smart TV.

Only one way to find out: plug everything in and try it. So I plugged my UltraHD Blu-ray player into the HDMI 3 input on my LG OLED TV. And I plugged the Yoyo (L) into the HDMI 2 input of the TV. That’s the one that’s labelled “ARC” on most TVs. I selected HDMI 3 on the TV and started a disc spinning. Success: the audio came out of the Yoyo (L).

I can’t swear this would work for all TVs. But if it doesn’t, then you’ll just need to use the optical connection from your Blu-ray player to the Yoyo (L).

The Yoyo (L) brings Cambridge Audio’s – you might say English – sensibility to music reproduction. At moderate levels it delivers a surprisingly full sound, seeming just about like a pair of smallish high fidelity loudspeakers. They would be speakers with an emphasis on the upper bass and the famed English “mellowness” of overall tone. That is to say that they deliver the high frequencies, but in a restrained, controlled and sweet way.

For example, I have Ed Sheeran’s album X playing right now, and the acoustic guitar sounds rounded, smooth and realistic. The finger noises on the strings are properly present, but they are not overly emphasised. Sheeran’s voice was initially a little chesty, but there’s a control for that. The IR remote that comes with the Yoyo (L) has a level control for what it terms “Sub”. But it’s a bass control, not a subwoofer level control. I backed that off by a couple of notches and balanced things out nicely.

The speaker driver arrangement provides a surprising amount of stereo soundstage width, although it isn’t going to challenge a pair of separates. It works mostly to allow a more rounded sense of instruments and voices than a mere mono speaker could provide.

One of the nice things about the Yoyo (L) was the seeming lack of dynamic compression. The Who’s Who’s Next had Keith Moon’s drums front and centre, not at all constrained by the speaker size. You don’t really get The Who’s music unless you get Moon’s drums properly.

The speaker could have done with a bit more gain. It went remarkably loud, filling my room with good quality sound. But that was only if the audio encoding was at fairly high level. A lot of classical and audiophile recordings use an average lower level than your typical Ed Sheeran album. So, when I went to have a blast of classical piano – Tzimon Barto playing Liszt – Hungarian Rhapsody number 2 was far lower in level than I would have liked, simply because it is a low level encode. I had the Yoyo maxed out.

Which is a pity, because the piano rendition sounded glorious at the volume it was able to deliver. No doubt it would have been more glorious at a higher level.

The Cambridge Audio Yoyo (L) truly is a useful “All-In-One” home audio system, with the unusual ability for a product in this class to enhance the sound of your TV.

Here and here are a couple of reviews we’ve done recently of other Cambridge Audio devices. And here is Cambridge Audio’s own site for the Yoyo (L). And here’s the Australian distributor’s site.

Features
Value for money
Performance
Ease of use
Design
Fine English sound
Good TV connection options
Chromecast compatibility
Could do with more gain on music encoded at a low level
No aptX/AAC support for Bluetooth
4.4

Related
9
For the tech savvy user