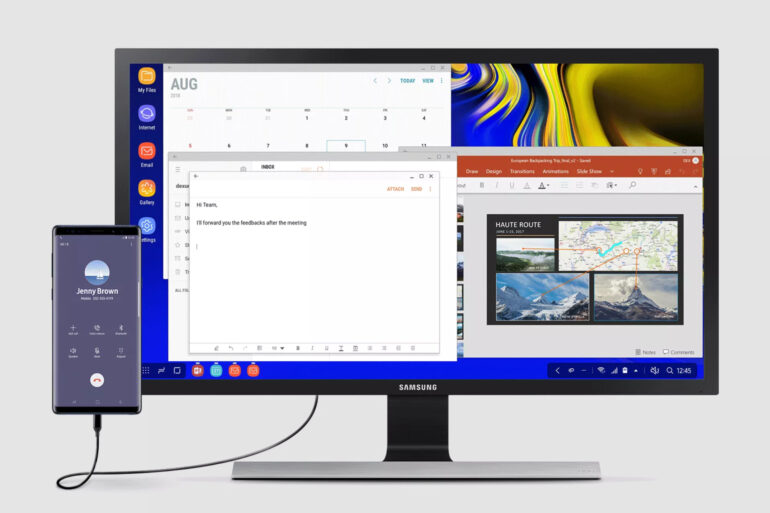 Are smartphones powerful enough today that you could ditch your computer or laptop and rely on it as your sole computing device? This has been an idea that the industry has flirted for a while now. It’s not crazy either given that the processing power of a modest smartphone far exceeds what we used to put man on the moon.

And by ‘replacing’ your PC, we don’t mean doing everything on your phone’s screen either. Instead, you’d carry your phone with you as normal, but when you get to work, it plugs into a laptop, keyboard and mouse. Your phone essentially switches into to a desktop ‘mode,’ where it runs, say, Microsoft Office for creating documents, viewing spreadsheets, and checking emails. It would run other programs too for browsing the web, editing photos or videos, opening PDFs, playing games, videos, music and so on.

A bit of history

There have been some concerted attempts to bring the phone-as-PC world to life. You may remember Windows Continuum’s, which was a big effort and showed real promise but was ultimately let down by performance issues and confined to a dying platform – Windows Phone.

On the Android front, Motorola grabbed headlines in 2011 when it shipped its Atrix smartphone with the Webtop platform, enabling users to access an Ubuntu-based desktop when docked.

With smartphone processors becoming increasingly capable, practically every major Android smartphone maker has had a stab at the idea since.

Even Xiaomi and Huawei have MiUi Desktop and EMUI Desktop respectively, while Motorola recently got back in the game with its ‘Ready For’ feature that allows users of its Edge series of smartphones to dock to a monitor for a desktop-like experience.

However, none feel as polished as Samsung DeX, which is supported on all Galaxy flagship smartphones and tablets dating back to 2017 including the Galaxy S8 and Tab S4. After spending a week solely using DeX for work including writing this review, I walked away surprised with how much I was able to get done. For certain types of users, I could see it becoming their only computer.

By simply plugging your Galaxy smartphone into an external monitor, you’re greeted with a familiar desktop-like interface, complete with resizable windows, drag and drop functionality and mouse and keyboard support.

I had originally dismissed DeX as a gimmick but to Samsung’s credit, the company has steadily been making a number of improvements to the platform coinciding with the release of its latest Galaxy smartphones and tablets in the S22 series and Tab S8 line respectively.

DeX no longer requires any extra accessories to get working, so long as your monitor supports USB-C or HDMI. It can even be projected wirelessly to any television that supports Miracast – perfect for presentations or streaming Netflix on a hotel TV.

The desktop user interface is clean and simple taking a few design cues from Windows and Chrome OS so that practically anyone can start using DeX without trouble. You don’t need to learn new keyboard shortcuts either, as the ones you have become accustomed to on a PC such as alt-tab for switching between applications work in DeX as well. You can even snap applications to each side of the screen like in Windows.

Performance feels equally snappy on the Galaxy Z Fold 3 and Tab S8+. Running a few benchmarks confirms there’s no performance loss when running in DeX mode so you’re ostensibly utilising all of the power your Galaxy smartphone or tablet has to offer.

In terms of input, you can use the smartphone’s screen as a touchpad too, but you’ll want to pair a Bluetooth mouse and keyboard for getting anything meaningful done.

Monitors that support display-out over USB-C usually offer a built-in USB hub for connecting peripherals, Using this, you can run a single cable to the Galaxy smartphone and keep it charged at the same time. Alternatively, you can attach a USB-C hub to the smartphone, which will give you a few extra USB ports for plugging in other accessories like external drives and SD cards.

Android has always worked well with external drives and the same is true for Samsung DeX. USB drives and SD cards work as you might expect, including the ability to move files around and format drives.

The nice thing is that your smartphone runs independently from DeX, so you can still use your handset as you normally would. It can also be a secondary display for scrolling through social media feeds or as a remote for controlling media.

DeX can also function as a surprisingly decent gaming setup. By pairing any Bluetooth controller such as an Xbox or PlayStation pad, I was able to emulate older titles from classic consoles as well as play popular mobile native titles such as Call of Duty without any issue.

Streaming the latest AAA games with Xbox GamePass, which felt right at home on a big external monitor, also worked without a hitch. You’ll just need to make sure you’re connected to a home or office Wi-Fi. Otherwise streaming games from the cloud will chew through your mobile data real fast.

Streaming services like Netflix and Disney+ also worked fine on DeX but felt a bit limited due to  playback being just ‘full HD’ 1080p and lack of support for HDR.

Photo and video editing apps like Adobe Premiere Rush and Lightroom also performed well and benefited greatly from the extra screen real estate afforded by the external monitor. I say ‘fairly’ as there were times when a random app would crash DeX, forcing me to reboot the device.

Previously, Samsung limited the number of apps you can run simultaneously in DeX but I never hit a wall with the Galaxy Z Fold 3 and the Tab S8+, though your mileage will vary depending on the age of your Galaxy device. It was also good to see that, despite the workload, the phone never became too hot to touch.

The other advantage is that the camera both on the front and rear of the Galaxy smartphone will work in DeX. This means you can use it as a webcam for video calls, and the quality will be better than most webcams on the market. You will need to get a bit creative on how to mount the smartphone above your monitor, however, but there are plenty of cheap aftermarket accessories available online that can help with that.

DeX supports regular 16:9 and ultrawide monitors, however, resolution maxes out at 1440p. The result is an upscaled image to fill a 4K monitor, which doesn’t look great. This may look better on lower-resolution monitors that match the DeX’s native resolution. There’s also no support for multiple monitors, but that’s probably asking for a bit much.

Outside of a few select apps made by Microsoft, Adobe and Samsung, there aren’t many apps optimised for DeX. What you’re left with are blown up mobile apps with the same layout as they would be on your phone. You can force apps to run in fullscreen or resizable windows but, again, as they aren’t designed to be used that way, they don’t always scale well to a big external monitor or behave as you would expect with keyboard and mouse input.

Similarly, dragging and dropping files into different applications is also quite limited as it is up to app developers to support this feature.

You can’t run more than one instance of the same app at the same time either, so having multiple Word documents side by side isn’t possible. Chrome is fairly limited on DeX since it doesn’t support plugins like its desktop browser equivalent. As a result, your favourite ad blocker isn’t available, and it also has a habit of bumping you off to the mobile app versions of popular sites.

I found Samsung’s native ‘Internet’ browser and Opera much better to use in DeX as they support plugins and also force websites to run in desktop mode as opposed to the mobile version. This way I can easily use services like Twitter and LinkedIn as if I were using them on my PC. I could also have multiple documents open side by side in Google Docs by running them in their own browser windows, which is something I couldn’t do with the native app.

I do wish there was a better sense of continuity between Android and DeX so that if you’re in the middle of an email on a smartphone you can pick-up right where you left off on DeX. Instead you have to open the app again in DeX and dig back into your drafts to finish off the email.

That said, it’s nice not having to constantly switch back and forth between smartphone and PC throughout the day, as all of the mobile notifications, text messages and calls come through on DeX. However, with Microsoft’s YourPhone app now available on Windows machines, this is less of a selling point than it used to be.

I also love the idea of having an always connected desktop experience so I can still get work done even if I’m in a location where there’s no WiFi available.

Samsung DeX vs Motorola Ready For

Motorola’s desktop solution, Ready For, offers a lot of the same features (and limitations) as with DeX but there are a few notable exceptions. It lacks the ability to force apps to function within a resizable window, so you can only run apps at a fixed panel size or fullscreen. Ready For is also only available on three Motorola handsets – namely the Edge 20 Fusion, Edge 20 and Edge 20 Pro.

One advantage that Ready For has over Samsung DeX is that it gives you a tailored user interface depending on how you want to use the phone with an external monitor or television. For example, hitting the ‘TV experience’ will aggregate all the streaming apps, allowing you to jump back into your favourite tv show with a single click. Similarly, Ready For has a dedicated launcher for all your video chat apps, making it quick and easy to jump in and out of video calls without having to go through a desktop interface first.

Overall, I was surprised with how much I could get done by simply plugging a Galaxy smartphone into a monitor or television. It won’t replace a PC for power users or for those whose needs extend beyond general productivity and web browsing. The lack of support for 4K monitors might also be a deal breaker for some.

However, if you’re the type of person that already gets most things done on their phone and doesn’t want to go down the road of investing in a full blown laptop, DeX provides a viable option. It’s also a great way to repurpose an older Galaxy smartphone or tablet that you may still have kicking around.