Can Bose “Find My Buds” find my buds? 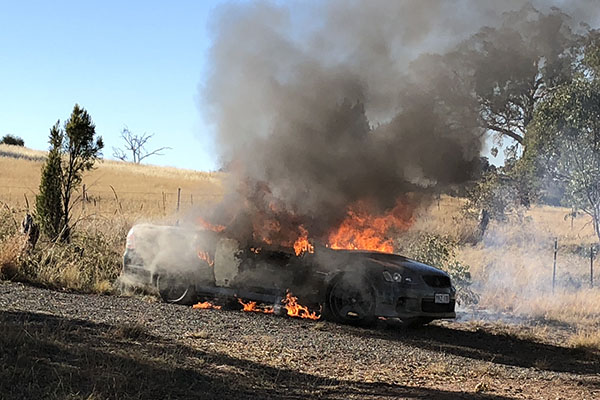 The other day I was forced to put the Bose ‘Find My Buds’ feature to the test. Do the safety features of this premium device work when needed?

You know when you’ve been focused on something for a while, and suddenly remember not remembering what you did with the gadget you were holding? You start feeling around in your pockets and then … there it is! Except when it isn’t.

I’ve lately taken to using an iPhone 8 for listening to podcasts rather than an iPod Nano. And it turns out that was a good move. As for the listening, I was using the excellent Bose SoundSport Free earbuds, which we reviewed here.

I noticed something strange Friday last week I had my little dog out for a walk.

I was on a track, just a little off a road and on the edge of horse paddocks and a large bushy area. A car nosed through a hole in the fence and then took off. Then I saw a big cloud of what I at first thought was dust. It turned out to be smoke.

The source was a Holden Ute. Or, more specifically, the flames flaring up from it. That’s it in the picture above.

It was then that absent-mindedness kicked in. I called the fire service and took a few pictures. Some other people turned up, and I chatted with them. Within five minutes a fire engine arrived and started extinguishing the flames. And then I had that sinking feeling.

Earbuds! Where were they?

I felt in my three pockets. There was the right Bose SoundSport Free earbud. Where was the left one? I went through the pockets more methodically. Nope, not there. I looked around me and tried to remember when I’d taken it out of my ear. And I couldn’t.

Evidently, it had been after I’d spotted the fire. I usually use my left ear when I’m talking on the phone, so I must have removed it to call the fire service.

But where was I standing or walking when I did that? Did I drop the earbud then, or later? I’d walked around a fair bit. I didn’t think I’d dropped it where the fire engine had driven, but that remained a possibility.

Can technology save me? I really like these buds

Then I remembered the Bose Find My Buds feature. That’s a part of the Bose Connect+ app that you can use to manage your earbuds. The app was on the iPhone 8, but I had I enabled that feature on that phone?

I fired up the app and, damn it; the feature wasn’t switched on. Not really expecting any joy, I switched it on, just in case.

And, within a few seconds, the app was connected to the earbuds and asking me which one I wanted to find.

At this point, I might as well nit-pick. It listed two products, both “Bose SoundSport Free”, but didn’t indicate which was left and which was right. I randomly tapped on the bottom entry, and it proved to be the left one.

And there on the iPhone’s screen was a map with the location of the left bud marked (and it was labelled “L” there). Now all I had to do was interpret the map.

Unfortunately, there were several tracks, but the map showed only one.

I tend to overthink things, so I spent some time searching a couple of plausible locations relative to different tracks. And then the firemen said I had to leave the area for a while because of toxic smoke.

Being a good citizen, I went away. I had noticed the app had a “PLAY SOUND” button. I experimented with it on the right bud. It produces a chirping noise from the bud that increases in level to what would be ear-piercingly loud if you had it in your ear. Indeed quite audible from several metres away.

Or it would be, were not a huge fire truck idling nearby, and a firehose streaming hundreds of litres of water onto a burning vehicle. So I did go away but resolved to return when things were quieter.

An hour or so later I went back, sans dog, and found a burnt-out husk of a Holden ute, but little disturbance otherwise. And this time I tried just trusting the app, even though I was very doubtful, it would work. I had also resolved to spend a lot of time in a slow, systematic, eyeball search.

I was worried that the app wouldn’t find the earpiece because it would have switched itself off after the usual twenty minutes. As far as I knew, that would be it.

And indeed the app initially couldn’t find the earbud. But I tried again, and the app connected. Even in standby mode, the buds must keep a lookout for some form of connection.

I followed the map. I zoomed it to the maximum level and then walked around so I could see how the blue dot – me – moved in relation to the left earbud. Then I just ambled until the blue dot was right on the earbud.

I looked around. There were tufts of grass and no earbud. I pressed the “PLAY SOUND” button and waited. After a few seconds, I could hear a chirp. It got a little louder until it was quite audible, although by no means loud. I may have been able to hear it from as far as ten metres away.

I lowered my head, swinging it side-to-side trying to locate the source of the sound.  The chirp was clear, but I couldn’t see it. And then, finally, I did catch a glimpse. Nestled at the foot of a tuft of grass was a very close to invisible earbud. But I had it!

So it turns out that the ‘Find My Buds’ feature of the Bose SoundSport Free earbuds does work. And not just in finding which room of the house you left the buds in, but out in the semi-wilds far from the beaten track.