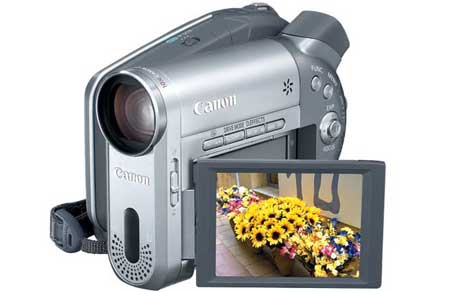 Canon’s first foray out of tape storage for their camcorder has hit the streets. David Smith was one of the first to have a serious play.

Out of the box, Canon’s DC10 DVD camcorder looked impressive. Weighing just under half a kilogram, it has a good ‘heft’ to it which is important for hand-held shots. The body is styled on a circular plan, to accommodate the 8 cm DVD inside. This makes the camera surprisingly comfortable to hold, for good anatomical reasons. If you take your hand and hold it, palm towards you, with your fingers slightly bent, you’ll see your fingertips pretty much lie on a circle. Wrapped around the DC10, with the grip belt properly adjusted, this places the camera nicely on the heel of your hand, with your thumb over the record button and your index finger right over the zoom lever. Ergonomically, this is one of the best mini-camcorders I’ve ever held.

The small, flat battery fits into a slot revealed when you open the LCD screen. This is neat, and makes changing batteries easy, even when using a tripod, but unfortunately it places an absolute limit on the physical size of the battery, and therefore battery life. This ranges from 35 to 75 minutes maximum, although typically the maximum time will be 35 – 40 minutes. Given that the DVD can only hold 30 minutes of video, this means you’ll be using about one battery per half hour. Do the maths and you’ll need to allow for the cost of some spare batteries, remembering as well that each one takes about a little less than 3 hours to recharge.

The camera has been very cleverly designed, with a useful array of clearly labelled buttons on the left hand side of the body. Most importantly, there are numerous superb presets, easily selected using a combination of the Function button and the ‘Omni Selector’, a small 4-direction joystick with a central selector button.

You start by selecting video or still mode with a slider switch at the bottom of the left hand body. Then at the top, under the fingers of your right hand, select AUTO, P or SCN. AUTO is just that – the camera makes the best image it can of your scene, but will obviously be subject to backlight and other issues.

P lets you select between Program AE, Tv (shutter priority) and Av (aperture priority). When set to Tv, for example, you can select the shutter speed you want and lock it in. Similarly, within Av you choose the aperture you want and it’s locked in.

A great feature is that the settings you choose are retained even after the camera has been turned off and restarted, which means you can have the system set to your favourite shooting mode and it’s ready to go as soon as you fire up the camera. Canon has saved you a lot of angst by arranging things this way, for the alternative seen in many smaller cameras is to force you through the menus each time you switch on, which is really frustrating. Big plus here, Canon! SCN lets you choose one of eight scene presets, which will alter the aperture, shutter speed and white balance as appropriate for your subject. Available scenes are: Portrait, Snow, Spotlight, Sports, Beach, Fireworks, Night and Sunset, and you can see the difference they make on the LCD screen.

At this stage I was getting pretty excited about this little camera. It was great to hold, all the controls were close to hand and the image in the LCD viewfinder looked bright and fairly sharp. It was time to shoot some video out in the garden.

I wandered round for a few minutes, just checking how things looked in the viewfinder, and discovered that the zoom was quite easy to use and offered a gentle zoom with light pressure up to an amazing – and very useful – crash zoom if required. I noticed that the little eyepiece viewfinder was very grainy which was slightly surprising since both it and the LCD viewfinder have the same number of pixels – 123,000. I also noticed that the camera became quite warm to the touch in use.

I came in to the computer with about six minutes of video recorded on a 30 minute DVD-R. First thing to do is press the Finalize button inside the LCD recess. Message: Please connect camera to mains power supply. OK, apparently any interruption to power – and even camera movement ? during the disk finalization can make the DVD unreadable. Don?t try finalising when you’re on that bus in Patagonia! First surprise. Finalising the disk took almost 5 minutes.

Now to see my garden video on the screen. Easy. The DVD was recognised immediately and launched Power DVD which was already on my computer. It also played perfectly on my normal DVD player and TV. Second surprise.

Although the image quality of static shots was excellent, there was very noticeable movement artefact whenever the camera was panned or tilted. This was a disturbing finding and vastly worse than the tiny movement artefacts you can get when transcoding DV taped shots to MPEG2.

I wondered what would happen if I edited some footage and then re-encoded it to MPEG2? In fact I could hear Douglas Spotted Eagle sitting on my shoulder like Jiminy Cricket – my ‘video conscience’ if you will – berating a participant (not me) at the Melbourne VASST conference earlier this year: “You present as a professional, yet you want to know how to edit MPEG files on the timeline in Vegas? Professionals just don’t do that.” And yet this camera requires you to do precisely that if you want to edit your footage. Hmmm. How would it turn out?

If you use a DVD-R disc you have only one option. You must finalise the disc then use the supplied Roxio MyDVD software to import the files to your hard drive. If you use a DVD-RW disc, you can do some limited editing in the camera, or transfer the files to the computer, again using MyDVD. I just wanted to see how the files would look when captured to disk and then rendered out as an edited video. Nothing fancy, just the kind of thing you?d do with a family party or travel video.

You can?t just pop the newly-recorded DVD into your computer and read the files in your favourite NLE software (Note that DVD camera disks can be imported directly to the timeline in Sony Vegas 6.0c – Ed). They must be imported via the ‘MyDVD for Canon’ software, which was easily installed. Of course if you were travelling or using someone else’s computer, you’d have to install MyDVD for Canon and that computer as well. Switch the camera to Play mode, power it from the mains and attach the USB2 cable to your computer.

I decided to use my normal office computer, rather than the fancy video workstation because it’s more representative of what people might use themselves. It’s a Pentium 4 1.6GHz with just 512 MB of RAM. Good for a ‘real world’ test. When I plugged in the USB plug, it was recognized immediately, and then Roxio required me to restart the computer. Selecting Open Disk from within MyDVD revealed my files in the DC10 folder. MyDVD then took some time to build a preview file. Finally I was able to capture the files which took approximately 6 minutes, ie real time. So far so good. My files had been broken into scene-based clips, with thumbnails provided in a browser.

In the Edit window, there are tabs for Titles, Special FX, Backgrounds and Transitions but I really only wanted to see how the image quality would look after being rendered out, ready to burn to a new DVD.

Surprise number three. Using the Best Quality setting – which I wanted to use to see how good it could look – rendering 6 minutes of video to MPEG2 took just under an hour. Ten times slower than real time, and that’s without any transitions, titles or effects. Not a good number! If I’d tried to render a full 30 minute DVD it would have taken five hours. Even on this older P4 computer, Vegas renders avi files to MPEG2 in less than real time so the comparison was stunningly bad.

Even worse was the image quality of the re-rendered file. It was quite blocky and the movement artefacts were now so bad as to be totally distracting. On a TV set the picture was just awful.

The quality of stills was surprisingly good, given the tiny 1.23 megapixel sensor. These days anything less than about 4 megapixels is considered a bit passÃ© but for small prints they’re not bad at all. The images are stored on a miniSD card and can be printed directly via PictBridge and the USB cable on compatible printers, without requiring a computer.

I have to say this was one of the most promising, yet disappointing cameras I have ever reviewed. That is a terrible shame because the problem is not in the camera itself but in the choice of DVD as a recording format. As I made clear at the beginning of this review, the camera is one of the physically best designed I’ve seen and it has a whole raft of excellent features such as Programmed AE, Tv and Av settings and so on. If you shoot your videos extremely carefully, avoiding fast pans and tilts and preferably using a tripod the resulting unedited DVD will look very good indeed. But I know people of all ages from 10 to 70 who love making their own videos. They almost always shoot them hand held and part of the fun is editing them.

With this system you have no option but to edit using Roxio MyDVD and that is going to be a SLOW process. Add in the cost of disks (around $18 per hour compared to $5 for mini DV tape) and extra batteries and this otherwise excellent camera is going to be a great disappointment. My conclusion is that the fundamental concept of direct to disk recording using MPEG2 compression is fatally flawed. The only way I can see this kind of system working is with high-capacity Blue Ray disks recording as AVI files for subsequent editing. For the moment those lovely little $5 for 60 minute mini DV tapes look pretty darn good!