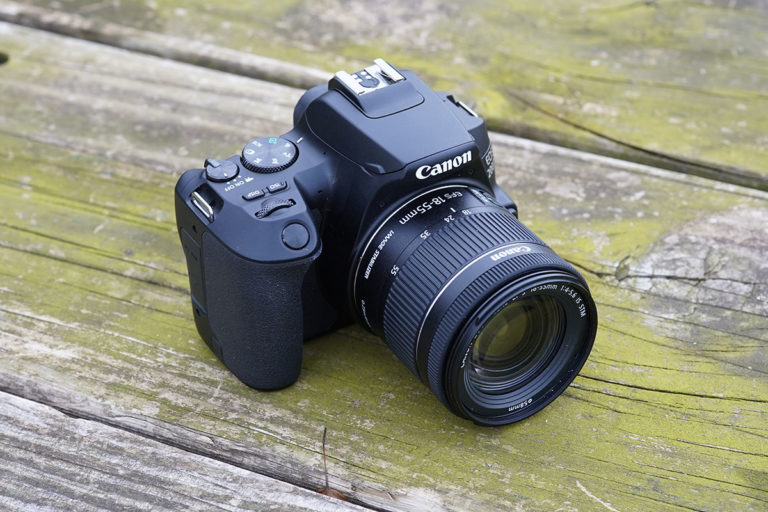 Well, I can’t really disagree with the claim that the Canon EOS 200D Mark II DSLR camera is the company’s lightest DSLR so far. Not that I’ve checked them all, but it certainly is light. But it’s far more than that.

In recent years I’ve mostly been using interchangeable lens mirrorless cameras, so let’s briefly recap what a DSLR is.

A single lens reflex camera uses a mirror in front of the film to reflect the view through the lens up into an optical viewfinder. When you press the shutter release, in addition to the shutter opening up briefly, the mirror flips up out of the way for an instant. A DSLR is the same, except a sensor is used instead of film.

As with the rest of the industry, Canon has in the last couple of years been increasingly leaning towards mirrorless. That includes the forthcoming Canon EOS R5 and R6, both professional level full-frame mirrorless models.

Meanwhile, Canon has been one of the best DSLR brands this past fifteen years, from the launch of the EOS 5D 12.8MP full frame model way back in 2005.

Let’s face it, mirrorless does have real advantages. There’s less camera shake when taking photos, since there’s no need to flip the mirror out of the way. Things are somewhat simpler. The lens can be closer to the sensor, allowing more optical design possibilities. The viewfinder – because it’s really just a mini-screen showing what the sensor is seeing – shows 100% of the scene, not a smaller central section. And you can use the rear monitor for framing your shots.

But the DLSRs show you the actual scene optically. There are no resolution limitations. And the Canon EOS 200D Mark II has “Live View” button near the viewfinder. Press it and you hear a little clunk as the mirror is flipped up and locked out of the way. Then you can use the rear monitor, just like that with a mirrorless camera.

Speaking of which, the monitor is flexible. You can flip it out to the left and rotate it on axis so, basically, you can see it from anywhere. Useful for framing those difficult shots. Again, that’s in Live View mode. In normal mode, the monitor shows settings.

The sensor feeding the monitor is APS-C in size. Canon’s APS-C is very slightly smaller – 22.5 × 15mm versus 24 × 16mm – than those in some other brands, but I doubt it makes any kind of significant difference. This one has a resolution of 24 megapixels – the images are 6,000 by 4,000 pixels and average 10MB in size for JPEGs at the highest quality setting, and 25MB to 30MB for RAW images.

The Canon EOS 200D Mark II comes with an 18-55mm zoom lens with a maximum aperture of f/4.0 to f/5.6. Because it’s APS-C the crop factor is 1.6:1, so that lens is equivalent to 28.8mm to 88mm in full-frame terms. Canon also sent the 18-135mm zoom (around $850) and a 60mm prime lens with macro (around $750) for the review. The two zooms have optical image stabilisation built in. It has been Canon’s practice to put OIS in its lenses rather than the camera body. Dual Pixel autofocus with nine autofocus points is employed. All three lenses also have a manual/auto focus switch.

The camera is laid out pretty much like any DSLR. The on/off switch also has a movie-taking position (4K to 25p, FullHD at 60p). One mode dial provides for things like intelligent auto, aperture priority, manual and so on. A scattering of buttons over the back of the camera invoke other functions. A wheel near the shutter release adjusts them.

With the standard lens, battery and card in place, the Canon EOS 200D Mark II weighed just 663 grams. It really feels light in the hand. My Panasonic GH4 – with a smaller Micro Four-Thirds sensor – by contrast, is just about 800 grams. It didn’t feel less sturdy for all of that. The right hand bump seemed the right depth for my fingers, while a sculpted channel on the rear guided my thumb between several buttons such that I didn’t accidentally press them.

Under a panel on the right-hand side is a Micro-B USB socket and HDMI output. A panel on the left side hides a socket for a wired remote control and a 3.5mm microphone input. The SDXC card slot is in the battery compartment.

There’s a hot flash shoe on top, but also a small pop-up flash.

Oh, how I did carry on earlier in the year! It was about being kind of let down by a compact Canon camera. I had just assumed that I could charge up the battery in-camera with a regular USB charger. But I was travelling far from home and disappointed to find that none of my charging gear would work. Soon the battery ran down and that was it. I should have taken the battery charger with me.

If you’re travelling with this camera, remember, take the included battery charger with you. As far as I could work out, the camera simply isn’t designed to be charged via the Micro-B USB connection.

That said, the battery lasts kind of forever. According to Canon specifications, it’s good for 1,070 shots with the flash firing at 50%, and 1,630 shots without the flash. Wow!

But I scoffed a little. Seemed like far too optimistic a claim. Except, after 400 shots over about three weeks without a recharge – with the camera set to take both JPEG and RAW — the battery indicator was still showing it as full. Hmmm. I was running out of time for more shots, with the camera scheduled to be returned. So put it on burst mode and went for a walk, holding down the button. For a long, long time. I kept taking photos until the camera stopped and refused to take any more.

But that wasn’t because it had run out of power. No, the 64GB SDXC card was full. Over the course of around three weeks, I had taken 7,226 photos on one battery charge.

And the battery indicator on the camera was still showing half-full.

Maybe you won’t need that charger after all.

I copied 384 files amounting to 7.18GB across to my computer using the Micro-B USB connection and it took almost five minutes and ten seconds. The speed worked out at 23.8MB/s. If you’ve got a card full of content, it might be worth popping it out and putting it in a fast card reader.

As I said, I carried this camera around for several weeks. It was so light in weight that I never hesitated to grab it.  Startup was perhaps not the fastest of the cameras I’ve used of late, but at a couple of seconds maximum, it wasn’t a problem.

There was a little bit of learning involved in how to do the things I like to do. Exposure bracketing doesn’t exist in a switch or mode dial setting. Instead you have to set it in the menu. Fine. The important thing is that it’s there. Ad hoc exposure compensation was readily accessible using a button near the arrow cluster. Touch that and turn the wheel near the shutter release, and it was almost like using it on a mirrorless camera.

Almost, but not exactly. The optical view finder does not, of course, reflect those kinds of electronic changes. Or, for sure, it has a line of data at the bottom showing the changes that you’re making. But the image itself remains unchanged. So you can’t use how the image looks to make those adjustments. You’ll simply have to make a judgement and then review the resulting photograph afterwards. Why, it’s almost like film days!

Some images using the camera

I was rather taken with the 18-135mm lens so I ended up using most of that time. It proved to have an extremely useful range, from the mildly wide-angle 28.8mm equivalent through to a long reach of 210mm equivalent. The birds were out and I couldn’t resist trying to get close to them with the longer lens.

Remember, all of these are hand-held. The sharpness is a testament to the effectiveness of the OIS.

Need I say more? Yes, I do need to say more.

In audio I’ve been saying in recent years that digital audio standards and most of the equipment employing them have moved well beyond the ability of the human ear to discriminate. In other words, effective perfection has been achieved in the transportation of digital audio from studio to our homes. (The speakers that actually deliver it? Well, that’s a different matter.)

We’re not quite there with digital photography. But we are so very, very close. If you’re intent on becoming a regular contributor to National Geographic, then I’d suggest you start with a higher level of camera. But the truth is, with some care, and choosing your circumstances and settings carefully, you can definitely shoot National Geographic-worthy shots with the Canon EOS 200D Mark II camera.