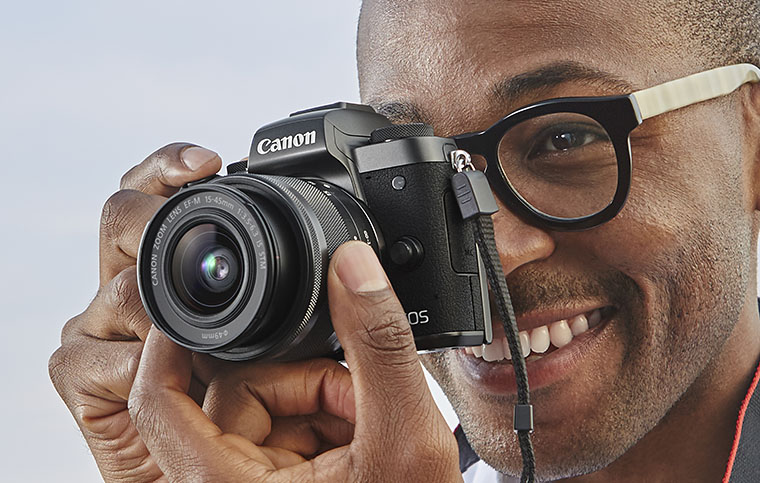 Photography giant Canon has announced the release of a new mirrorless DSLR camera, the Canon EOS M5, along with a new M series lens to go with it.

Traditional single lens reflex cameras – digital or otherwise – use an angled mirror behind the lens and in front of the film or sensor to reflect the image from the lens up to the view finder. That way the photographer can frame the image, set the focus and make other adjustments while seeing the image as it will appear in the resulting photo. When the shutter button is pressed, the mirror swings up out of the way so that the picture can be taken.

Mirrorless cameras skip, as the name implies, that whole mirror thing. Instead the viewfinder is in effect a tiny screen showing the output from the digital sensor. Getting rid of the mirror can permit a lighter, more compact design while still retaining the all-important ability to change lenses.

The Canon EOS M5 uses a 24.2 megapixel APS-C CMOS sensor to capture the image, with ISO able to be set to anywhere from 100 to 25,600. Canon says the sensor has an extremely wide dynamic range. In common with all APS-C cameras, it has a crop factor of 1.6 (that is, a 35mm frame has a 1.6 times bigger diagonal).

Canon has fitted its DIGIC 7 processor, the first time for an EOS camera. The camera switches on in one second and it’s able to shoot at up to 7 frames a second with auto focus operating, or 9fps with fixed focus. Video at up to sixty frames per second progressive in full HD resolution can be shot with five axis digital image stabilisation. The electronic viewfinder has a 2.36 megapixels resolution, while the 81mm tilting touch screen monitor has 1.62 megapixels.

Both WiFi and Bluetooth are built in for wireless image sharing and remote control from a mobile device.

It features four stops of optical image stabilisation, designed to work well with the digital stabilisation built into the EOS M5. Canon says that the seven blade circular aperture and a silent auto focus motor makes it an all purpose lens.

The camera and lens should be available from mid-November. Canon follows its usual practice of saying that “prices will be set at dealer discretion” which tells us absolutely nothing. If prices aren’t a matter for dealer discretion, the competition authorities might well have something to say. Still, we can give you a sense of pricing. The camera is available for pre-order at a big US retailer for $US979 without lens, and $US1479 with the new lens. This likely translates to something like $1460 and $2160 here, based on other Canon models available here and there.