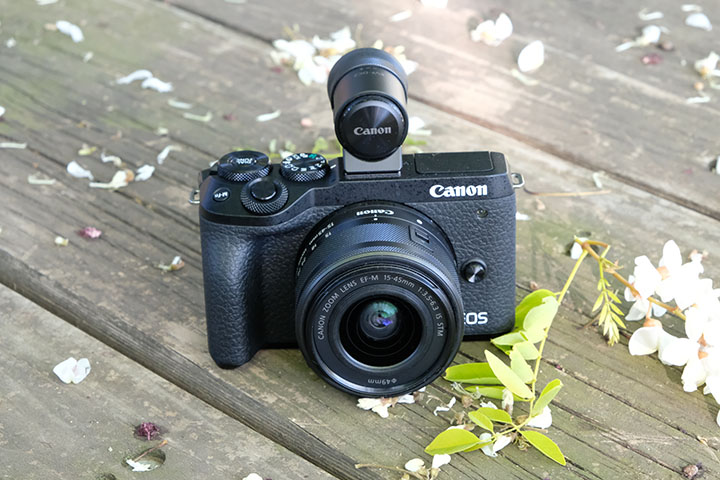 Phones, after destroying the compact camera business, have reinvigorated the higher-end camera market. Which brings me to the new Canon EOS M6 Mark II. What is it? Well, it’s both a compact camera and a higher-end interchangeable lens camera.

The body of the Canon EOS M6 Mark II is indeed barely larger than that of the old compacts, most of which have now disappeared. But since it uses the Canon M Mount, it can be about as big as you want it to be. Searching Canon’s website, there seem to be eight Canon lenses for the mount. These range from a 22mm pancake ($245) to a 200mm telephoto zoom ($449).

Let’s dwell on those prices for a moment. The most expensive Canon M Mount lens seems to be the 18-150mm zoom, which is priced at $749. As far as the camera lens industry goes, those lenses seem quite reasonably priced.

The review camera comes as a “kit”, which means it includes a lens. It’s the EF-M 15-45mm f/3.5-6.3 IS STM, a compact zoom model. I kind of liked it, but with reservations. Its performance was good and the zoom range is reasonable: 24mm to 72mm, 35mm-equivalent. And when you’re not using it, it really is compact.

But that’s because it retracts the front of the lens and locks down using a tab on the barrel of the lens. I found that fiddly and it made firing up the camera a relatively slow process. Usually because I’d forget to unlock the lens until the camera reminded me.

The sensor is APS-C in size – smaller than full frame, larger than Micro Four Thirds. It packs in an incredible resolution of 32.3 megapixels. The resulting images are up to 6,960 pixels across by 4,540 pixels tall. That’s with a 3:2 aspect ratio. Others are available at lower resolution. Pictures can be captured in JPEG or RAW formats. In JPEG, two levels of compression are available: 11.1MB or 5.6MB (compared to 35.6MB for RAW).

At the back is a 75mm 1.0-megapixel touchscreen monitor for framing your shots and controlling things. This can fold out, up to about 45 degrees at the top for helping you take overhead shots. And it can fold all the way around the other way, so that the display shows from the front for taking selfies.

Part of the reason for the small size is that there is no built-in electronic viewfinder. That would kind of rule it out for the more discriminating photographer, except that a nifty little removable EVF is included. This slides into the flash shoe and engages with a row of custom connections at the front of the shoe. There’s a pop-up flash next to that. I couldn’t find specifications for the EVF, such as resolution. But the image was sharp and clear and you get all the usual in-view functions.

The main control on the top is the mode dial, while a multipurpose dial next to it controls most other functions. There is the usual collection of rear buttons as well, two of which fell a little too readily under the heel of my right hand and were thus accidentally invoked.

Think of a thing you can do with a modern mirrorless camera and you can be confident that you can do it with the Canon EOS M6 Mark II camera. Amongst other things, this includes:

This kit also comes with an external battery charger.

Yes, that lens did take a little getting used to. Also, the zoom works in reverse to most of the lenses I’ve used (on different brand cameras … I don’t remember for Canon). That is, counterclockwise to zoom in, clockwise to zoom out to a wide angle. If this became your main camera and lens, I’m certain its way of doing things would soon become instinctive.

And, yes, the sheer compactness of the camera didn’t leave much room for control buttons, so I did tend to press them accidentally more than usual.

But that is the extent of my complaints. In a sense, the Canon EOS M6 Mark II camera is difficult to review because it is so very nearly completely free of any defects.

I took a bunch of photos in two very different venues. I’ve just been looking through them, and there were only half a dozen unusable shots out of a couple of hundred. And of those, all but one were clearly complete misfires by me; I had unintentionally fired off the camera while it was pointed at the floor, the sky, whatever. The final failed shot was badly smeared. Clearly, I had moved the camera during the shot.

And that means the camera works brilliantly in point-and-shoot mode. But of course you can go full manual if you want greater control, or choose your own balance between the two.

I checked out the transfer speeds from the camera using the USB Type-C connection. Yes, it turned out to be USB 2.0 speeds: a bit over 21MB/s. If you have a full card and a fast card reader, it’d probably be more efficient to pop out the card and use the reader.

I took one set of photos set at a poorly lit product launch. It’s much easier taking photos of the slideshow during a launch than in is to try to jot down all the relevant information. But the following photo was of the sculptural lighting used in the venue. I didn’t expect the triangular light bars to show any colour at all, given the ridiculous contrast. But they have retained at least a vestige of their redness.

Let’s just zoom in a bit. I was holding the Canon EOS M6 Mark II by hand. Indeed, really by hand. I’d forgotten to take the EVF with me, so I couldn’t brace the camera against my head. The camera retained a shutter speed of 1/60th of a second by winding up the ISO to 6400 (that was its choice). Yet the noise levels and clarity are quite fair, almost remarkable under the circumstances.

Even more impressive were the colours at the last day of the Floriade in Canberra. Under full sunlight these things can be challenging. Note the attractive bokeh in the field of flowers behind the subject.

See the detail on this tulip. Gorgeous.

Look closely. There’s a bee in the centre of the yellow flower.

Finally, without any special HDR mode, the shadowy foreground still provides reasonable detail, even while the blue sky and pond retain their colour and aren’t washed out.

Are most interchangeable lens cameras too bulky for you? Then check out the Canon EOS M6 Mark II. Chances are that it’s got everything you want in a lovely small package.

Canon’s site for the camera is here. Check out our previous coverage of Canon cameras here. I’ve seen this camera available at leading retailers for considerably fewer dollars than the Canon list price.

Features
Value for money
Performance
Ease of use
Design
Compact body
Full featured
Excellent first-shot reliability
Compact, yet with EVF for use when required
Some control buttons in inconvenient spots
4.2