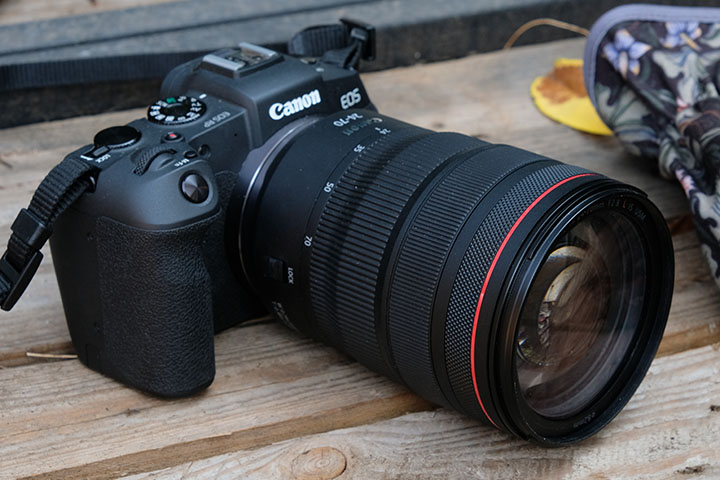 I don’t think I’m alone in expecting Digital SLR cameras to eventually give way almost entirely to mirrorless. The past couple of years has seen camera heavyweights Canon and Nikon add full-frame mirrorless cameras to their lineups. The Canon EOS RP is one of the least expensive of the genre.

Indeed, the Canon EOS RP is the second full-frame mirrorless from the camera-maker, appearing soon after the higher-priced, higher specification Canon EOS R.

It’s smaller and significantly lighter than the R. The body weighs just 485 grams. But, note, as a full-frame camera its lenses are significantly bigger than those for APS-C cameras and even more so than those for Micro-Four-Thirds cameras. Indeed, two of the three lenses supplied by Canon for the review are so wide that the camera can’t sit flat with them mounted. The camera uses Canon’s RF lens mount. (They are very nice lenses though, and consequently they are bigger than the norm even for a full frame camera.)

In general, the Canon EOS RP has a little bit less of everything compared to the R. Rather than a touch over 30 megapixels, it features a 26-megapixel CMOS sensor. Canon says it has 26.2 “effective” megapixels. The maximum picture size is 6,240 by 4,160 pixels, which actually works out to just under 26MP, so whatever. Presumably the extra 0.2MP is used to generate useful information for the final image.

The camera will capture RAW, of course. It uses a single SD card (it’s located in the battery bay at the bottom of the camera) with support for the faster UHS-II bus.

The OLED electronic viewfinder has 2.36 million pixels, down from the 3.69 million in the R. Likewise, the touch-screen rear monitor is slightly smaller at 75mm and has 1MP compared the R’s 2MP.

Does that make a difference? To my eye, the 2.36MP of the RP gave excellent sharpness. No doubt 3.69MP would be even better, but you won’t feel its absence unless you’re used to it.

The monitor can swing out to the left and then be turned on a spindle. That gives it truly excellent flexibility. You can have the monitor facing forwards for selfies, perfectly parallel to the ground for overhead shots, facing directly upwards for low shots, and just about anywhere in between.

You don’t get the R’s LCD top display on the Canon EOS RP. There’s a single mode dial on the top, along with multi-function control dials and a bunch of buttons. The external ports are on the left side. There is a Mini HDMI output, a USB Type-C connector for battery charging, power and file transfer, a 3.5mm headphone socket, a 3.5mm microphone socket and a socket for a wired remote control.

With Bluetooth and Wi-Fi you can also use apps on your phone to control the camera.

You can configure autofocus to various options, such as single point all the way to 4,779 points in zone shooting. You can burst shoot at five frames per second. The shutter speed goes up to 1/4,000th of a second.

In short, the camera will do pretty much anything you want a camera to do, although some things are a touch unintuitive and can be a bit slow to access, unless you’ve properly completed your studies of the camera.

For example, we in Canberra were experiencing second-hand the bushfires over the Christmas/New Year period. They smoke has produced an interesting redshift in the quality of the light at certain times of the day.

But by default, just about all digital cameras and phones employ something called “Auto White Balance”. They analyse the image they see before them and adjust the overall “temperature” of the light to remove general colour casts. Thus, when you’re taking photos under incandescent lights (if you can still find any) the orange caste will be removed, and you’ll get a more natural result.

And that of course also removes such things as a reddish atmosphere. But as with all decent cameras you can switch the white balance to something fixed. For this kind of effect, it’s best to choose the “sunlight” setting and that tends to give accurately recorded colour.

For most of the time I was using the camera I found that it took nine button presses just to get to the white balance setting. Eventually I decided I’d better see if there was a better way and checked the manual. Ah! It turns out that there’s this little button on the top labelled “M-Fn” for “multi-function”. When you press that, you can use the rear dial to select between ISO, single/burst/delay shooting, single or continuous autofocus, white balance and exposure compensation for flash. You use the top dial to change each setting as required.

That’s a lot faster. As always, RTFM. Several times. With care. That goes with all modern cameras if you really want to get full value for the hundreds to thousands of dollars that you’re spending.

My problem is that I use lots of camera and my instincts are often wrong, having been moulded by one brand and thus being inappropriate for another. For example, Canon provided one zoom lens and two prime lenses with the review camera. As has been my previous experience with some Canon cameras, the zoom lens ring works in the reverse direction to those on Pentax, Sony, Nikon and Panasonic cameras. That’s not the slightest of problems if you purchase and use the Canon EOS RP camera pretty much exclusively. You’ll soon become the master of it, and instinctively turn everything the right way.

Nonetheless, there are still some efficiencies that Canon could provide. For example, on the main menu, as far as I could work out, to get from the “Shooting” section of the menu to the “Playback” section you have to arrow through nine pages of options. Most cameras let you step back to the higher level, then arrow to the next main option and then go into it. That’s three button presses instead of nine.

That said, you can create a custom menu so you can put all your favourite stuff in the one place. You can also create up to three shooting modes, assigned to the three custom positions on the mode dial.

I mostly used the zoom and the 50mm prime. I kind of fell in love with the latter. Remember, back in the day of 35mm SLR cameras, 50mm was pretty much the standard focal length. It was with a 50mm lens (although a slower f/2 one) that I learned proper photography on a fully manual Pentax K1000 film camera.

This lens is so old-school, it doesn’t feature image stabilisation.

As I mentioned, Canberra was fogged by second-hand smoke, perhaps at its worst on New Years Eve. I snapped the 50mm lens onto the camera and went for a walk. After about an hour, my eyes were starting to sting. But that extremely wide aperture allowed excellent night-time photography.

At the time, I hadn’t realised that this lens did not include image stabilisation. But the shots didn’t seem to suffer for it. The camera managed to maintain a minimum shutter speed 1/60th of a second for almost all the shots, only slowing the shutter speed below that when the automatic ISO was pushed to 12800, and it still wasn’t enough. (Note, all settings were automatic, chosen by camera in “P” mode.)

ISO 12800 would typically give a harshly grainy result. Not with this camera. Yes, there was grain in the above picture, but even zoomed in it’s modest:

I prattled on earlier about the white balance. It just would not have been right to artificially balance out the colour. This is much closer to what it looked like:

And, of course, a wide aperture of f/1.2 combined with the largish frame size of the Canon EOS RP camera allows a shallow depth of field. But less shallow than I would have expected.

The 70mm maximum zoom on that lens was really quite modest. Still, it gave a bit more flexibility than the 50mm prime. This is the Australian War Memorial five days before Christmas, shot from across Lake Burley Griffen and zoomed in to a 1:1 crop. Insofar as you can see it through the Delhi-trumping haze, it’s nicely detailed and sharp.

But the associated drought brought some surprise visitors into the Canberra suburbs, including a monotreme. Apparently it was a little thirsty:

The macro 35mm lens let me get rather close to the action, including some bees busy with the trumpet vine on my side fence.

Dragging photos from the camera to my computer using a fast USB Type-C cable resulted in speeds of between 21MB/s and 26MB/s depending on the mix of stills and videos. Opening and closing files seemed to be the thing that slowed transfers down – the same test card that gave 21MB/s in the camera gave over 80MB/s using a fast card reader. That speed is in accord with Canon’s specifications, which say that the “digital terminal” has a specification “Equivalent to Hi-Speed USB”. That’s the fastest speed available under USB 2.0. Nominally it’s 480Mb/s or 60MB/s, but USB 2.0 stuff tends to run at 20-30MB/s in the real world.

As usual with interchangeable lens cameras, the ultimate picture quality is going to depend on the lens you use. Clearly the Canon EOS RP camera can make use of the highest quality of those lenses. And if you’re after full-frame digital, you’re going to be hard put to find a lower cost competitor.

Canon’s site for this camera is here.

Features
Value for money
Performance
Ease of use
Design
Excellent picture quality
Versatile rear monitor
Excellent first-shot reliability
Could do with some work on efficiency of controls
4.4