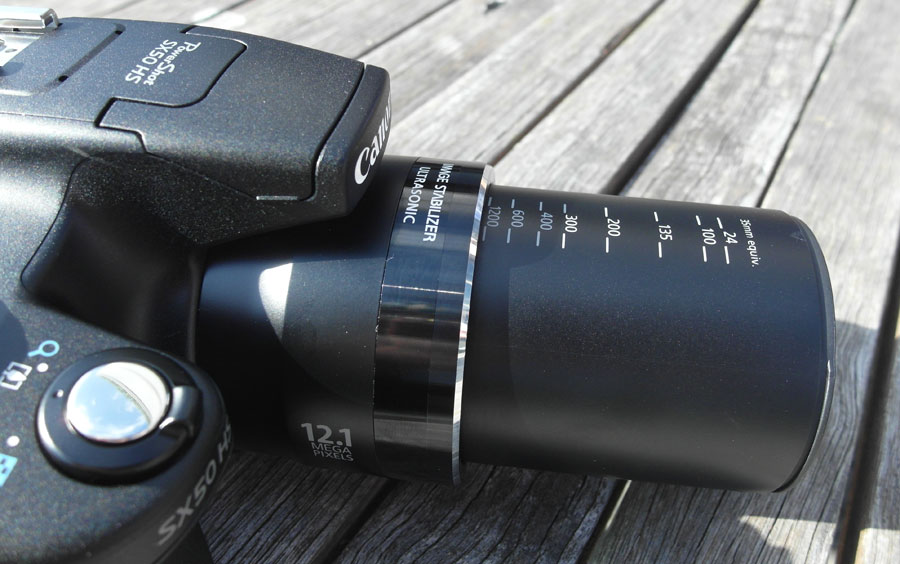 When you’re on holiday or at a sporting event, you can never be sure how far away you’re going to be, but Canon looks to have a solution coming for that, with a whopping 50x optical compact camera on the way.

Announced this week at Photokina, the Canon PowerShot SX50 HS is a new compact shooter with a lens capable of reaching the 35mm equivalent of 24mm to a massive 1200mm, one of the longest we’ve seen in a camera.

The Canon SX50 HS is a 12 megapixel shooter with low light sensitivity up to ISO 12800, with RAW support, a tilting and multi-angle 2.8 inch LCD touchscreen, and even a viewfinder, in case the LCD doesn’t do it for you.

With a ton of zoom at your disposal, focusing on subjects at such a far distance could be difficult, so Canon has provided two buttons on the left side of the camera which help you to quickly zoom out, acquire focus lock, and zoom back in again.

Canon is also including a technology it called “ZoomPlus” which, when explained to us, is a neat way of saying the latest form of digital zoom, although hopefully with less noise and pixelation than we’ve previously seen. As such, ZoomPlus in the SX50 HS can apparently reach a maximum 100x optical, or 2400mm to be exact.

Image stabilisation is included, more or less a neccessity for such a long zoom, and the camera can shoot up to 13 frames per second too, so you shouldn’t miss a shot.

We spent a few minutes with it and found the SX50 HS to be a well weighted little camera, with a very impressive zoom lens.

The buttons on the side – called “Framing Assist” – are insanely helpful when you’re dealing with long zooms, and we were able to spot things in the distance when using the buttons, something we weren’t able to do by hand.

Canon hasn’t issued an RRP in Australia, as it generally doesn’t anymore, but we’d say it should fit in just above the SX40 HS, which should see it in the $550 to $650 price range when it becomes available in the next couple of months.