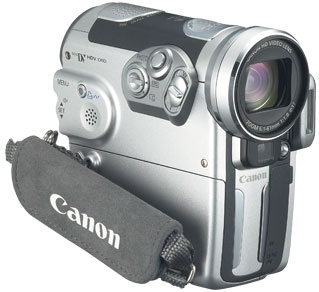 The smallest and lightest HDV camera in the world? You better believe it, says Frank McLeod.

Being shaped a bit like half a cube, the HV10 has a widescreen LCD monitor that allows you to see what comes through the Canon HD lens onto the ‘True HD CMOS Sensor’. This 2.96 megpixel CCD replacement can record up to 1920 x 1080 video, which certainly is true HD. That image will be helped by optical image stabilisation, which works even at the full extent of its 10x optical zoom. Its colour reproduction will be aided by an RGB Primary Colour Filter, which helps get around the unit not having three chips for colour.

While it is easy to shoot an image with the HV10, using it is neither comfortable nor familiar on first picking up the camera. With three fingers – index, middle and ring – inserted through the angled safety strap, I had to decide where they should rest. The ring and pinkie could go to the front of the camera, but I had to be careful not to obstruct the front-mounted white balance and auto focus sensors. The zoom control is in a most unusual position, being near the front of the camera, high up on the right and side. I was undecided whether to not to use the index or middle finger to operate the slide, which performs this function.Ã‚Â  Including these controls, there is a total of 20 buttons variously arranged in and on the camera chassis and under the LCD.

Readers who have read this far will realise this camera had not won me as a fan to this point, but I had the opportunity to plug the HV10 into a rather nice 32 inch Samsung high definition LCD TV and was simply blown away. The colour and detail displayed were, quite simply, exquisite and I felt I could have stepped into the picture. Sound should not be expected to be as good, as there is neither a suitable shoe or plug for an external microphone to be attached.

This camera is an amazing performer and produces images totally unexpected for its size and unprepossessing appearance. I would be an adoring fan if it was larger, easier to handle, more ergonomically designed, and fitted with an external mic shoe. A headphone and mic socket would be good too, as would appropriate editing software.