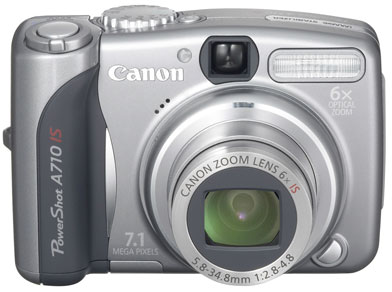 This camera is a good example of how, for just a few more dollars, you can snare some important features that you would otherwise miss.

The Canon’s 6x zoom is a useful lens; add an optical image stabiliser and you have a really capable picture-taker that can cope with wide vistas and, thanks to the tele end of the zoom, pull in steady, distant action pictures with the equivalent, in 35 SLR terms, of a 210 mm lens.

Not a ‘dress-up’ camera, the styling is restrained in grey with chrome accents. It’s also notable in this price sector for having an optical viewfinder as well as a rear 6.4 cm LCD screen.

The LCD has a grid display that helps help picture framing and levelling. If your final print size is 10 x 15 cm there’s also a useful 3:2 ratio guide to help you more accurately compose a shot for minilab print making.

The control layout is logical and easy to follow, so you won’t find yourself scratching your head when operating the camera.

Turn on the power and you can shoot your first pictures about three seconds later, with subsequent shots coming in at two second intervals.

The auto focus system uses Canon’s nine-point Artificial Intelligence that automatically scans and selects subjects from a set of nine focusing areas across the scene. Alternately, you can manually select the focus point from almost anywhere in the frame. The focusing range itself is straightforward, so you can shoot subjects as close as 1 cm or as far away as infinity.

The PowerShot A710IS can be used as an ‘auto everything’ camera but, thanks to aperture and shutter priority plus manual exposure options, more expert photographic hands can tweak its operation and catch some attractive photographic effects. There are also 20 scene modes to make short work of situations, such as taking decent photos of fireworks, night shots etc.

Canon’s popular My Colours mode lets the more adventurous create artistic effects both before you shoot and after.

Eye-catching shots can be made with the camera’s flash system, one that is unusually well configured for such a well-priced camera. The Canon provides first and second shutter sync to help you capture trailing, streaming car lights.

The lens design is above average for a mid-priced camera, with only small amounts of distortion evident at the wide end of the zoom, and nil at the telephoto end.

The pictures made with the camera while on test showed accurate colour and excellent sharpness.

Good value, especially if you can get one for less than $500. The optically stabilised 6x lens is a major attraction.

Weighing just over 200 grams, the PowerShot A710IS is an easy-to-carry camera, with the benefit of some useful picture making features.