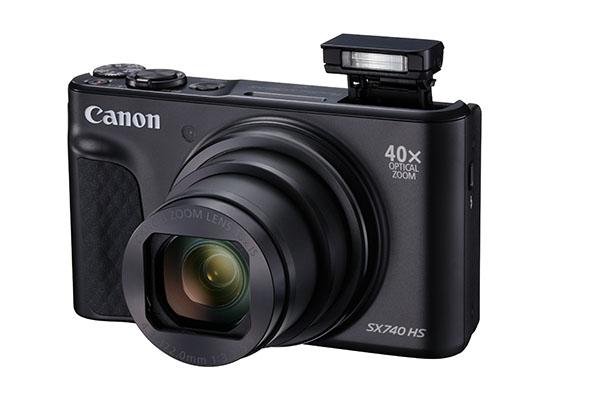 Canon has announced an upgrade to one of its pocketable PowerShot cameras. The Canon PowerShot SX740 HS will deliver 4K video and faster bursts.

The Canon PowerShot SX740 HS is mostly the same as the current Canon PowerShot SX730 HS (which we reviewed here) which Canon touts – correctly – as an excellent travel camera. The key is the 40x optical zoom. It works out in 35mm equivalent terms to 24mm to 960mm. That’s all the way from wide-angle to super telephoto. And that means very versatile photography.

The maximum aperture for the lens is respectable at f/3.3 to f/6.9, wide angle to telephoto. To help at those longer focal lengths, there are up to three stops of optical image stabilisation.

The sensor is largish 20.3 megapixel CMOS unit. The camera sports an ISO rating of up to 3200, and its shutter speed can range from 15 seconds to 1/3200 second. For those who want to exercise some control over their photography, in addition to the fully automatic shooting modes, it has manual and semi-manual modes such as aperture and shutter priority.

There’s no viewfinder. The 75mm monitor is tiltable so you can frame your shots from odd angles.

Pocketable? When switched off (which draws in the lens) it’s 110mm wide, 64mm tall and 40mm deep. And it weighs 299 grams. Okay, that’ll make a bit of a lump in your pocket, but only a small one.

There’s one little wrinkle on that 4K. A note in the specifications says that for 4K “the angle of view is narrow than in Full HD”. I figure that when you’re shooting FHD, the camera takes the 5184 pixel-wide frame and scales it down to Full HD’s 1920 pixels. Presumably, the camera doesn’t have quite enough grunt to do that for UHD, so it would simply crop out a 3840 by 2160 pixel frame for UHD video shooting.

Also provided, Wi-Fi and Bluetooth low energy for communications with the Canon app on your smart phone.

As is Canon’s irritating practice, the press release tells us that “prices [are] set at dealer discretion”. Indeed. That’s always the case. A company can only ever “recommend” or “suggest” a price to dealers. It is against the law in Australia for it to insist on a price. In the absence of a figure from Canon, we’ll just have to guess. For reference, the Canon PowerShot SX730 HS currently sells for around $500.

The Canon PowerShot SX740 HS will be available in September 2018. Canon’s website for the camera is here.