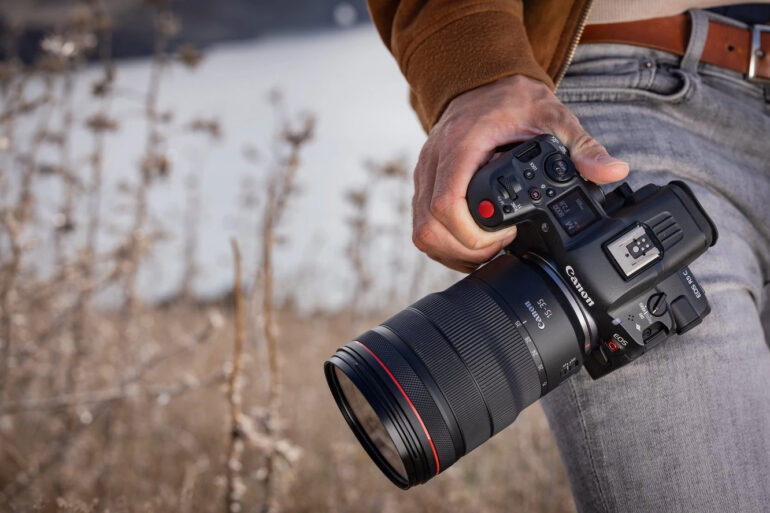 Canon’s R5 mirrorless digital camera has become a kit-bag mainstay for amateur and professional photographers. And, with the ability to shoot in 8K resolution, it’s become a tantalising option for many hybrid photo-video shooters. However, when recording in 8K and even 4K the R5 has suffered from overheating issues, which limit recording sessions.

Enter the new EOS R5 C which is a cinema-focused variant for the hybrid shooter. Think wedding photographers who also want shoot video, or solo videographers who need to take the occasional photo. Canon’s aim is to maintain the R5’s photographic brilliance, while addressing its current limitations as a video shooter.

The R5 C is underpinned by the same technology as the R5, which includes a full frame CMOS sensor, DIGIC X processor, RF Mount. This gives it the capability to capture 45 megapixel stills at burst speeds up to 20 frames per second. However, with an extended body and all-new cooling system, the R5 C can record 8K video (30p RAW or 60P) for as long as needed, without being interrupted by a ‘thermal shutdown’ like on the R5.

In addition to 8K, there’s also 4K and HD recording modes, which take advantage of sensor oversampling to improve image quality even further. 4K can be captured at up to 120 frames per second. There’s also HDR support, along with HLG, PQ and Canon’s Log 3 gamma, however C-Log 2 is only available on higher end Cinema EOS models.

The R5 C can record Cinema RAW Light internally, for those that want the flexibility of 12-bit footage for post-correction. There are also 3 new RAW variants with different bitrates including RAW HQ, ST and LT. Also added to the mix is Canon’s 10-bit XF-AVC format (up to 810Mbps).

In terms of auto-focus, the R5 has made a name for itself with incredible face and eye-tracking. This is also present on the R5 C, however, it’s not clear at time of writing if the same system (Eye AF and EOIS iTR AF X) will be available in both photo and video modes.

One omission that will be missed is the removal of IBIS the (In Body Image Stabilisation) found on the R5. Instead, the R5 C relies on digital stabilisation, which can work in conjunction with a compatible RF or EF lens’s stabilisation.

Like the R5, there are two memory card slots including one CFexpress 2.0, type B and a UHS-II SD card slot. Options for simultaneous recording on both cards in different resolutions and formats are included.

The R5 C retains the same 0.5-inch OLED viewfinder with 5.76 million dots as well as 3.2 inch HD LCD that can articulate to different angles.

To access the new cinema features, a dedicated switch has been added for photo and video modes. When photo mode is selected, the R5’s familiar photo menu is displayed. Switch to video mode, and the menu changes to the same Cinema menu layout as found on the Canon EOS C70 and C300.

In addition to a larger body to accomodate a fan, vents and cooling pathways, the are 13 customisable buttons for assigning custom features. Made with magnesium, the R5 C’s chassis is 680 grams, and the smallest and lightest Cinema EOS camera to date.