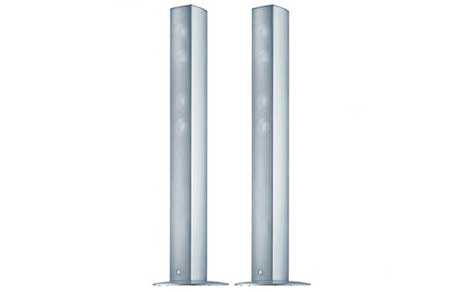 German loudspeaker maker Canton seems to be especially well known for making stylish and compact loudspeakers. Such as the Canton CD 3500 wireless models. In fact, the CD 3500 model range includes versions without the wireless modules and without the power amplifier, so they can be used as conventional loudspeakers without the extra cost. Indeed, even this wireless model has both line-level and speaker-level inputs for direct wiring.

The wide range, though, is useful if, for example, you want to wire a front pair of them to a receiver in the normal way, and use wireless only for the rear. The speakers will sound the same, but you will keep costs down a little.

However, there is a ‘channel switch’ on the system that allows three pairs to be used at the same time without cross interfering with each other.

The system consists of slender floorstanding aluminium towers (a black anodised finish is also available at higher cost). They would topple very easily, so small are their footprints, so flat metal bases are supplied which are readily screwed on.

Each unit has five drivers as outlined in the feature list. Canton claims a frequency response of 27 to 30,000 hertz. That 27 hertz figure sounded far too ambitious for me. The speakers do produce good bass, down to around 40 hertz I would estimate, but not down to those floor-rumbling depths.

What is important is that the sound – including that musically important 40+ hertz bass – was well balanced. These are very listenable loudspeakers. Importantly, there was no audible noise from the wireless system.

Pushing the volume up stressed them at the upper end, but good room-filling levels were available cleanly.

The transmitter unit can be fed its signal using RCA inputs, or speaker-level inputs (useful if your home theatre receiver doesn’t have preamplifier outputs). There are various configuration switches for changing channels and sensitivity, so you won’t have trouble matching the Canton CD 3500 to your existing system.