In case your Tesla is running low … 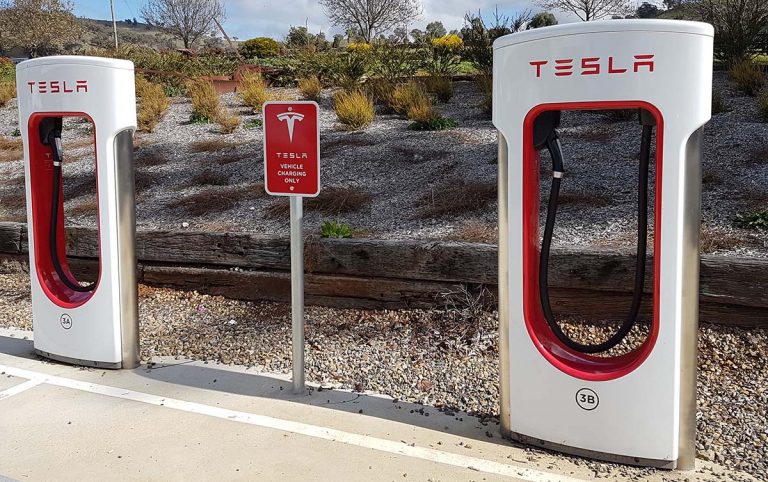 Ever wondered what the charging station for an electric car looks like? I stumbled across these the other day in Southern NSW, behind the Dog on the Tuckerbox roadside stop near Gundagai, New South Wales. Not just a Tesla charging station, but six of them.

Tesla cars are by all accounts a brilliant car for driving, so who wouldn’t want do the Sydney/Melbourne trip in one? Unfortunately, the road distance from Sydney to Melbourne is close enough to 900 kilometres, whereas the range of Tesla cars is presently closer to 350 or 400 kilometres, depending on the model and the battery pack fitted. So a Tesla driver can expect to stop every so often for a “top up”.

Tesla’s maps show a fairly dense coverage of parts of the United States and Europe with charging stations, while those in Australia are largely confined to an arc of a dozen Tesla Superchargers curving around the south east of Australia, from Byron Bay in Northern New South Wales, through Sydney, Albury/Wodonga and Melbourne to Ballarat, with one spur out to Cooma. New stations out west of Ballarat and north of Byron Bay are planned for later this year. A standalone in Bunbury, Western Australia, is also planned for this year.

Tesla says that the Supercharger stations will get you up and going again in half an hour.

I think we can expect to see more of these, and perhaps the equivalent from other brands, in coming years.

For the moment, the red tags mark the spots: