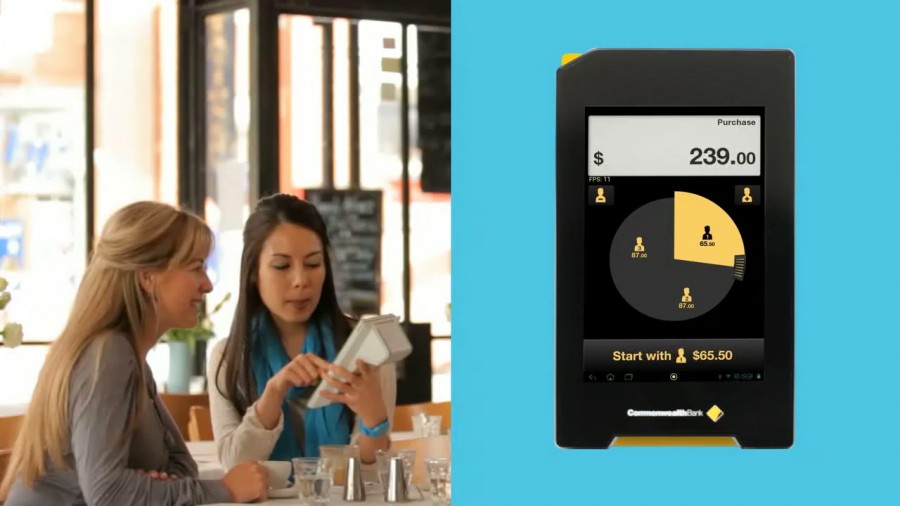 When we hear about banks and technology, the news is almost always from the Commonwealth Bank (CBA), with the financial giant making a lot of waves for its advancements in payment technology and social networking. Now it’s doing it again, introducing a new way for retailers to to accept electronic payments.

Unveiled this week in Sydney, Pi aims to get retail to replace the aging, chunky-look EFTPOS terminals with a sleeker, more elegant and powerful solution that provides an easy, safe, open, and secure way for retailers to take cashless payment from you when you’re buying clothes, food, lunch, dinner… anything you can think of.

Concept-wise, Pi is combination of the modern smartphone and tablet, with two members of the family scheduled to be rolled out over the next 12 months, the first of them as early as next month.

Developed around an Android 7 inch tablet, Albert (above) won’t be introduced until some time next year. You can think of him as an EFTPOS payment system on steroids, equipped with the power of 3G, WiFi and suped-up security features. These claim be able to protect transactions made through swipe cards with magnetic strips, chip cards, and even the simple tap NFC-based credit cards used by MasterCard and Visa.

According to the CBA, the Albert tablet aims to offer businesses an easy and friendly way to speed up customer transaction times by allowing retailers to take the purchase order away from the desk and to the floor, removing the lines where they are.

“We spoke to a lot of consumers and businesses, and we found there was a big disconnect in the experiences,” said Kelly Bayer Rosmarin, Executive General Manager of Business Products and Development at the Commonwealth Bank.

“More than 80 percent of customers hate standing in queues, but only 20 percent of businesses think this is a problem.”

Albert aims to banish the queue altogether, and can even make it easier to pay a restaurant bill, with software on the tablet able to work out how to split a bill equally between all diners.

“We know we’ve succeeded when we see smiles appearing on the faces of people first interactive with the services and products that we helped to create,” said Pascal Soboll, one of the members of IDEO, a design and consulting firm the Commonwealth Bank worked with on this project.

Developers are currently building third-party business-focused apps for the Pi Albert, in readiness for 2013 availability. Until then, the Commonwealth Bank is looking to get businesses on board with Albert’s little brother, nicknamed Leo.

This iteration of CBA’s Pi relies on the Apple iPhone 4S, providing an external case that builds in the swipe, chip, and tap card technology with enough layers of security for businesses that want to ditch their EFTPOS systems next month, as opposed to next year.

The devices couldn’t come at a better time, with seven million MasterCard PayPass cards in Australia and over 100,000 terminals accepting the new credit technology.

Expect to see shops around the country integrating the Pi gadgets within the next year.