Cent-a-Meter – keeping a close eye on your power consumption 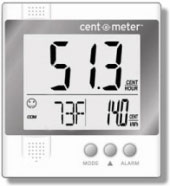 We all want to cut our electricity consumption, if for mo other reason than that our bills will soon be going through the roof. While not actually saving you any power on its own, the Clipsal Cent-a-Meter gives a clear read-out of electricity being used and places a dollar value on the power your airconditioner is chewing through, which might be incentive enough to switch it off and open a window.

The meter comes in two parts: a clip-on sensor that needs to be instaled by an electrician, and the wireless receiver that displays the readings. You can get read-outs of electricity being used, dollars being spent and even tone of CO2 being produced.

You can also set a limit on how much power you want to use, and when that limit is reached, an alarm sounds alerting you to switch something off. By helping you to keep an eye on your electricity consumption, the Cent-a-Meter can save you money and, ultimately, might help you look after the planet.

According to figures from the Department of Environment and HEritage, the average home uses up to 10% of its electricity in stand-by power. If you saw all that stand-by power racking up dollars and cents, perhaps you’d remember to turn some things off!

The Clipsal Cent-a-Meter is available from electrical wholesalers Australia-wide, with an RRP of $279.