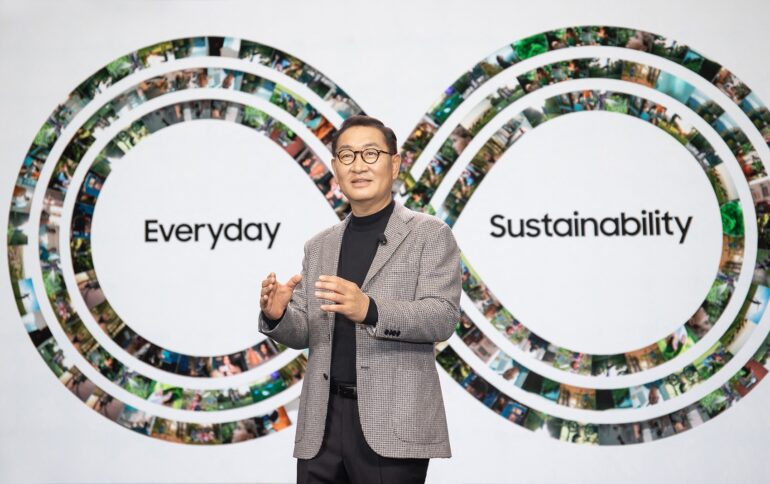 Samsung hit CES in a big way this year, with a booth dedicated to the company’s new push for a future that it calls “more sustainable, customised, and connected”. In human-speak, the first part of this mission statement refers to Samsung’s commitment to green production and shipping of its products – think recycled plastics, less packaging, and product that consume less electricity overall.

The ‘customisation’ aspect refers to a push away from boring black, silver, or white appliances, and toward products that offer a wider range of looks – even (in the ironic case of whitegoods) a massive choice of different colour combos.

And ‘connected’ of course refers to the proliferation of ‘smarts’ in everything from your fridge to the humble vacuum. But especially in displays, which are increasingly including Samsung’s Smart TV functionality, no matter what the display’s main job is – be it workhorse business monitor or ultra-curvy gaming powerhouse. Let’s check out some highlights.

Starting with customisation and connectivity, Samsung’s latest iteration of the Galaxy S21 is more affordable than the others in the line-up, starting at $999, but it’s anything but a low-end phone. With the same chipset as the Galaxy S21, the S21 FE (the FE stands for ‘Fan Edition’) has extra colours to choose from – including olive and lavender – and obviously packs 5G connectivity for the fastest mobile data speeds too.

As with all Galaxy phones, Samsung’s One UI 4 gives users a tailored Android experience that now includes the Privacy Dashboard, where you can manage all your privacy options in one place.

It wouldn’t be a Samsung CES without a tranche of TV announcements boasting even more enhancements to its already stellar image quality. The really, really small LED backlight revolution continues, with the Samsung MICRO LED TV packing an almost crazy-sounding 23 million micrometre-sized LEDs into each 110 inch, 100 inch, or 89 inch in the line-up.

The 2022 MICRO LED range also includes 20-bit greyscale depth, which means more than one million steps of brightness and colour level. That translates to unprecedented detail in every scene, and what Samsung calls a “true HDR experience”. The MICRO LED TVs also support 100% of DCI and Adobe RGB colour gamut, which is another first.

A couple of other neato features on MICRO LED include Art Mode, which we’ve seen before on Samsung TVs but which should look even better on an 8K display with this kind of contrast capability. And then there’s Multi View, which splits the single 8K display into four 4K displays, capable of showing four inputs from four HDMI sources at the same time.

Samsung Micro-LED displays are via special order only, with pricing yet to be revealed.

Neo QLED is not forgotten!

It’s not all about MICRO LED for 2022 though, with the more mainstream Neo QLED TVs getting a new repertoire of tech tricks too. A new Neo Quantum Processor will rock your visual (and audio) world with Shape Adaptive Light tech, which analyses what shapes are on the display (think: bus versus tiger), and tweaks the shape of the light from the TV’s Quantum Mini LEDs to enhance the brightness and accuracy of all shapes on the screen.

Real Depth Enhancer, meanwhile, is what Samsung calls a “multi-intelligence picture quality algorithm”. The specifics are esoteric but the results are clear: Objects are analysed against their backgrounds, and the image is processed to increase the sense of depth and realism.

Object Tracking Sound (OTS) will be upgraded in 2022 to OTS Pro, and the TVs get upward-firing speakers so Dolby Atmos can work without the need for plugging in a soundbar or surround system.

Samsung’s 2022 Frame, Serif, and Sero lifestyle TVs get some subtle but important upgrades to help them do their unique jobs even better. The Frame gets an anti-glare, low reflection Matte Display so it becomes even better at camouflaging itself as a work of art in Art Mode.

The Serif gets the same Matte Display and for the first time, a 65 inch option. And the weirdly wonderful rotating Sero gets the Matte Display and the ability to split the TV top-from-bottom in vertical mode, so you can watch two sources simultaneously. Oh, and there’s a rotating wall mount for the Sero now too!

Local pricing and availability the 2022 Samsung Neo QLED and Lifestyle TV ranges will be available closer to launch.

New to Australia in 2022 is Samsung’s Bespoke range of home appliances. What’s bespoke? Well it starts with a massive range of colour options – 12 in total – which can be combined in different ways to create, Samsung says, “thousands of colour combinations”.

This full colour customisation applies to the French Door Bespoke Refrigerator for now (think: one colour for the doors, another for the quick access tray, and a third for the bottom freezer section). There’s also a choice of glass and steel finishes for even more customisation.

Bespoke fridges also include the 4-Door Flex, the 2-Door Bottom Freezer, and the 1-Door Flex Column, so there should be a fridge for whatever your family needs. The Bespoke French Door fridge also has the option to upgrade to the Family Hub model – that’s the “internet fridge”, with a touchscreen and full SmartThings connectivity, apps, and so forth.

Also in the Bespoke range is the new Samsung Bespoke Jet vacuum (pictured above right). It’s a cordless stick vacuum that includes an innovative charging station that also empties the vacuum’s cannister. The Jet provides 210W of suction power and can collect 99.99 per cent of fine dust.

The Bespoke JetTM will be available in Midnight Blue from February, with pricing to be announced at launch.

The Bespoke Refrigerator line-up, colour options and local pricing will be available from June 2022.

Everybody has a Bluetooth speaker these days, which they bring along to everything from a backyard barbie to a remote wilderness beach at the end of a six-day bushwalk. But how many people have portable projectors? Whatever the number, Samsung aims to boost it with the Freestyle. It looks like a little spotlight, but it’s actually an 830 gram portable projector that can fire a 100-inch image onto virtually any surface (and if that surface happens to be relatively smooth, the image will be clear and crisp too).

Not up for a movie under the stars? The Freestyle can also work as a mood-lighting projector in Ambient Mode. Sound is handled by a dual passive radiator for tight, deep, bass, and sound is projected in 360 degrees so everyone can enjoy the music – or movie soundtrack.

Power to the Freestyle can be supplied by any USB-PD 50W/20V source, be that battery or wall-wart, so you can take it anywhere. As for getting content up on to that wall, the Freestyle includes a full Samsung Smart Hub interface, so you can stream via your preferred apps, just like on your Smart TV.

The Freestyle will be available in February for $1499, with pre-orders available now from Samsung.

With the Odyssey range of curved gaming monitors, Samsung has carved itself a well-earned space in any hardcore PC gamer’s setup (and consoles too, by the way). Now, the Odyssey Neo G8 brings a full 4K panel to a 32 inch 240Hz 1000R curved display. Mini LED backlights and HDR 2000 mean incredible images and deep detail, so it’s basically a perfect wishlist of gaming monitor features… with a bonus.

The G8 also features CoreSync lighting. This rear-mounted lighting system automatically detects colours on the display and projects them “in real life” (as Samsung says) to create a deeper sense of immersion.

Meanwhile, the Samsung Smart Monitor M8 might not have the fancy curved display of the gaming units, but it does have a an 11.4mm thickness (or should we say thinness?) making it about 75% slimmer than its predecessor. This 32 inch 4K display can function as your ultimate productivity hub, thanks to the included moveable magnetic clip-on SlimFit webcam, and the USB Type-C 65W charging hub for your portable devices.

Speaking of that webcam, this showcases the M8’s other big innovation: the built-in Smart Hub. You don’t even need to turn on your PC to make video calls, since this is supported on-board the monitor with its own Video Call app (which supports other video conferencing platforms, including Google). That Smart Hub also supports the usual range of Samsung Smart TV app too, so after a hard day’s WFH, you can seamlessly flick over to Netflix or Disney+ to unwind. Oh yeah, the M8 includes a remote too.