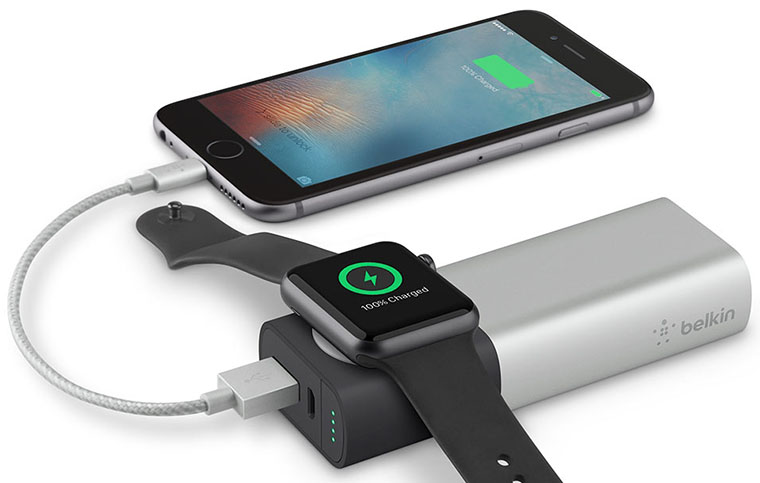 Apple is boasting that the iPhone 7 has the best battery life yet for an iPhone. But no phone can guarantee lasting through an exceptionally busy day without the battery being drained. And if the day is a busy and the iPhone is busy, then the chances are that the Apple Watch – assuming you have one – will be busy too and need a top up. The Belkin Valet Charger should fix all that.

So what is this Belkin Valet Charger? On the face of it, it’s a simple power pack with a 6700mAh capacity. But there’s a reason it has been given a CES 2017 Innovation Award. While it’s charging your iPhone it can at the same time charge your Apple Watch … wirelessly. It has a magnetic charging module for Apple Watch built in.

So you plug your iPhone into the USB socket using a Lightning to USB cable (you supply that) and drape your Apple Watch over the charger so it can be refilled wirelessly.

The Belkin Valet Charger holds enough charge, says Belkin, to charge an iPhone three times or an Apple Watch eight times. Presumably that means you could change your Apple Watch four times and an iPhone one-and-a-half times. Both the USB output and the magnetic charging module can provide up to one amp each at the same time.

If you inspect the photo closely you’ll see that there’s also a Micro-B USB socket on the charger. No, that’s not for your Android phone. That’s for charging up the Valet Charger itself. A USB to Micro-B USB cable is included.

The device is certified under Apple’s MFi Program (“Made for iPhone/iPod/iPad”) so you can be confident it’s well built and, most importantly, won’t inflict any damage upon your Apple devices.