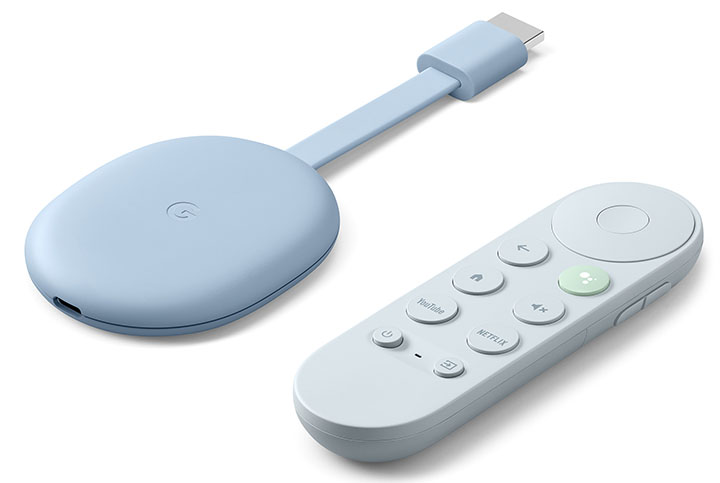 Don’t have a smart TV? Doesn’t matter. If it has a HDMI input you can make it smart by plugging in a Chromecast with Google TV. And not just half-hearted smart. The features are not very much different to those in the latest Sony TVs, which run Android TV. In fact, the interface is going to be the same as the Android 11 interface in 2022.

So, you plug it in to a TV (or a computer monitor), set it up and then you’re able to watch (or listen to) YouTube, Netflix, Spotify, Prime Video, Disney+, Stan, YouTube Music, ABC iView, 9Now, 7Plus, SBS OnDemand, 10 play. And a whole bunch more that you can install from the Google Play Store. (Some of those required paid subscriptions.)

The Chromecast with Google TV comes with a remote control with built-in microphone. That means you can use it like a Google Home device – ask it questions about the weather or the news or how to solve an arithmetical problem. And you can also bring up movies and shows just by saying their names, or by saying things like, “Free action comedies”.

Before digging into the details, some facts and figures.

About the Chromecast with Google TV

Okay, the name is a bit cumbersome, but we need to distinguish the device from the standard Chromecast, which is still available (now up to the 3rd generation). The standard Chromecast is also a streaming device, but it doesn’t really have much of an interface and is limited to 1080p output. To use it you send content to it from your phone and some other device.

The Chromecast with Google TV isn’t just a passive receiver, it runs the Android TV OS and generally you’ll be controlling it with a paired RF remote control. It’s available in three colours: Snow (ie. White), Sunrise (kind of pink) and Sky (light blue/green). As you can see from the pictures, it’s a kind of flat disk with a tail, at the end of which is the HDMI plug. It comes with a power supply and a USB Type-C socket to power the unit. For the techy types, it has an Amlogic S905X3 processor – the brand is used in oh, so, many Android TV OS dongles and set-top-boxes.

The unit connects to the world via dual band Wi-Fi, with up to 802.11ac supported. It also supports Bluetooth. Not only for the remote control. I connected a pair of decent Bluetooth headphones to the Chromecast with Google TV. Indeed, I’m listening to music from Spotify from it as I type.

The output capabilities are top notch: output goes up to 4K at 60 hertz. That’s as good as it gets at the moment (except for some semi-experimental 8K stuff on YouTube). There’s quite a bit of content on Netflix at least which delivers that. Furthermore, the enhanced picture modes of regular 10-bit high dynamic range (HDR10), advanced HDR10+ and even more advanced Dolby Vision are supported.

Setting up the Chromecast with Google TV

When things can connect to your network only wirelessly, it’s important that they do so smoothly. Let’s see how it went. I plugged everything in and put the included batteries in the remote. It was apparently pre-paired. Within seconds a message appeared on the TV screen announcing that the remote was connected.

Then it told me – these were the instructions shown on the TV screen – to download and open the Google Home app on my phone, and “When instructed in the app, scan the QR code”. So I opened the app, which was already on my phone, but there were no instructions about anything. There was a small “Set up Chromecast” button near the top, and that proved to be the gateway to a few screens which eventually had me scanning the QR code. Then it was smooth sailing, just following the instructions on screen and phone as the device connected to my network (it was fed the password from the phone).

But that first step should have been clearer. I don’t mind that there’s little documentation provided with devices these days, but what is provided should be accurate.

Nice little extra: you get a 14-day free trial of ad-free YouTube with the Chromecast with Google TV. Unlike most such trials, you don’t provide credit card info and automatically start paying if you forget to terminate it at the end.

As I was working through the tail-end of the setup on the phone, the Chromecast with Google TV was updating itself with the latest firmware. Both were completed at pretty much the same time.

Then it was back to some on-screen instructions on the TV. First, it was to set up the remote control. Since it was already paired, I didn’t really know why there was more setup required. It turned out that in addition to RF-pairing with the Chromecast with Google TV unit, it also incorporates an infrared sender, compatible with most TVs and other gear. So I could use the volume buttons on it to control my home theatre receiver – I just selected the brand – and the power button to switch on and off my TV. Again, select the brand. I did not expect this, but it was clever and quite welcome.

Then over the next 24 hours all those did in fact load. At one point all were working except Library, but after a while even that appeared. I guess it had to settle in somehow.

Most of the apps I listed above were pre-loaded – or at least they automatically loaded during setup. One that didn’t was 10 play. But you can add apps easily from the Google Play Store, which is what I did. Of course, to use things like Stan, Disney+, Netflix and Prime Video you will need a paid subscription. I have subscriptions for the last two, so I went into the settings and zapped the others that I wasn’t going to use. You can always install them again if you want, but they were just cluttering up the main screen.

The main screens were mostly displaying a grid of movies and TV shows and under each one is an icon showing its cost, if you want to rent it from Google Play Movies & TV, or the source (eg. Netflix, Stan) if it’s available from one of the other services. Click on the movie or show and you’ll be presented with options. If the show is from Google, you’ll generally be able to choose to rent or buy. Rent means watch it within a fairly short window – you have 30 days to start watching, and then 48 hours to finish once you start. Buy means you can watch it as often as you want. The prices vary, but rentals are typically something like $4.99 to $6.99, while buying is closer to $20. I was looking for a recent blockbuster to establish a top end, only to realise that there haven’t really been any blockbusters this year.

Be a little careful

If you go to something labelled Netflix or Prime, you can click to watch the item straight away (if it’s included in your subscription), or there may be other options, such as a “3 ways to watch” button. Click on that and you can choose the freebie, or rent or buy from Google.

The algorithm was imperfect. For example, the action thriller Ava is included in a subscription to Netflix, but there was no hint of this on the movie’s main entry, where it was offered for rent ($4.99) or sale ($19.99). I did actually watch it for free, but I had to go into the Netflix app and look for it there.

Nonetheless, the interface was generally very useful. I forgot to mention, many of the movies also have the Tomatometer score from Rotten Tomatoes. This is an aggregate score derived from a number of professional movie critics. I prefer the Fire TV Stick Lite’s use of IMDB scores, which are based on tens or hundreds of thousands of viewers, but it’s better than nothing.

In use, the streaming was solid and the picture quality excellent. After watching Ava for a while, the resolution dropped off. I went back to the home screen, then resumed play and that fixed it. It happened one more time. Netflix? Perhaps. The original multichannel audio format of the show – Dolby Digital Plus – was properly delivered to my home theatre receiver. And that voice control stuff … it made finding a program to watch so very easy.

The Chromecast with Google TV came out of the box set to 1080p output. I figured that was the maximum until I noticed the little 4K logo on the box. You have to go into settings to kick it up to a higher resolution. I set it to 4K at 60p. By default, it also converted all content to – on my LG OLED TV – Dolby Vision. There was a setting to make the video come out natively, instead of so converted. I prefer to let the TV do its best with the raw source rather than pre-process it.

The Chromecast with Google TV is still a Chromecast. You can dial it up on various devices and cast content to it. For example, you can cast a tab on the Chrome browser running on any computer to it. I’ve got a Mac screen up on it at the moment. Likewise, you can cast the content from the YouTube app on any phone to it.

It has limitations. Chromecast has never worked at 4K resolution with video or photos I send using a Chromecast-supporting media app, even though when I get the same app to send stuff directly to my TV, it comes through in pristine UltraHD resolution.

I could also cast all manner of audio to it, including high resolution stuff up to 192kHz sampling. But note that the output format was always two channel PCM with 48kHz sampling. I doubt that his makes an audible difference, but some audiophiles may not like this.

It’s probably the best way to turn any HDMI-equipped display device into a smart TV.