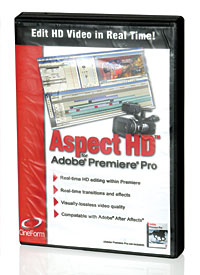 John Westwood from Redgum Productions gives his view on HD, editing software and Cineform in particular.

More recently, manufacturers like Sony have introduced a range of consumer HDV cameras including the HC3 model that retails for around $2000.

HDV still has a number of hurdles to jump before it becomes mainstream in the world of consumer video. The first challenge is to find a suitable television set on which to watch the results, which usually leads to the purchase of a plasma or LCD screen and this process is only just gaining momentum. The second hurdle is the replay hardware and we are only now seeing the emergence of HD DVD players. Finally, for the enthusiasts who like to edit their work, a platform or editing software that can handle the complexity of HDV is needed.

To my mind, at consumer level there are only two video editing programs that can handle HDV with any confidence and both need the support of recent high-quality hardware development. Sony has its latest release of Vegas 6 and Adobe has come to the market with Premiere Pro 2. Both programs are capable of editing HDV in its native form, but with some difficulty. Compared to the broadly adopted DV format, HDV requires a lot of horsepower to contend with the huge increase in resolution and file size.

Frankly, it would be quite outside the means of the general consumer to purchase a computer with enough grunt to deal adequately with HDV in its native form and this point wasn’t lost on Cineform Inc., in the United States, which has set about developing a video plug-in for both Adobe and Sony that would allow most enthusiasts to edit HDV in much the same way as they do DV now.

HDV is just another form of video and, like DV, needs to be captured from a camcorder to your computer. Once on the computer the material is edited, titles and other embellishments are added and finally the completed video is transferred back to videotape. Where the Cineform plug-in helps is with the compression of HDV into a form that makes it easy to capture, edit and play back.

The plug-in comes in two forms, Cineform Aspect HD for use with Adobe Premiere Pro and Cineform Connect HD for editors using Sony Vegas. Although the plug-in is reasonably small in size, about 10MB, the Adobe version will cost you $US499 and the Sony version $US199. One may ask why the price difference between the Adobe and Sony plug-in? Simply, the Adobe version is much more powerful and refined and more likely to be used in the professional market, so a good deal of research and development has been applied.

Our recent bench test with the Cineform Aspect HD plug-in cutting a 55-minute documentary for broadcast television was very successful and we encountered no problems whatsoever in the capture, edit and playback of our material. Considering there was more than 19 hours of raw HDV footage involved we feel this is a testament to the capabilities of Cineform and supports the information found on its Website.

As far as the consumer is concerned the cost may seem a little daunting but when you consider just two years ago many enthusiasts were spending up to $2000 to buy video capture cards for DV, the investment in a Cineform plug-in is more than reasonable.