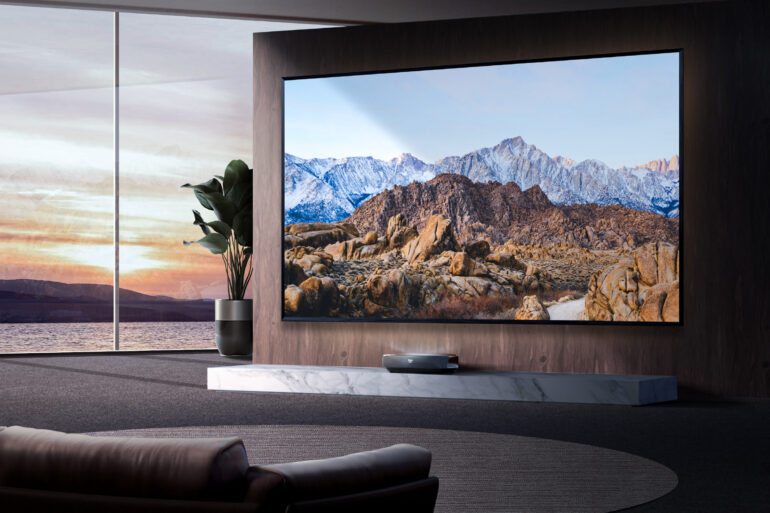 For big-screen entertainment at true cinema scale, you need a display that’s 100 inches or bigger. Where to get such a monster, and how to fit it in your home? The Hisense TriChroma Laser TV has all those answers… and more!

Most TVs using an LCD or OLED panel can only get as big as 85 inches, before the price creeps up and they need specialised installation. But if you crave that true cinema experience, you really want a TV that’s 100 inches or above – trust us.

The solution? A Hisense Laser TV, which is actually a short-throw projector with its own state-of the-art paired reflective screen, complimentary with purchase.

What is a Hisense Laser TV?

Rather than putting all the electronics of the TV behind a glass LED or OLED panel, imagine a minimalist Ambient Light Rejection screen (ALR) instead, accompanied by a small stylish console positioned at the base around 35cm from the wall.

Hisense’s Laser TV uses short-throw projection, which means the unit sits at the front of the room, usually on a low TV unit or cabinet, so it’s also under the screen. That means there’s no need to drill holes for ceiling mounts at the back of the room, and no unsightly cables to run.

The Hisense Laser TV, as the name suggests, uses a single laser module to project an image with unrivalled clarity and colour. And for cinephiles and those who demand the very best in colour reproduction, the Hisense TriChroma Laser TV uses not one, but three, laser modules – red, green, and blue – to take colour to the next level. In fact, the TriChroma Laser TV can reproduce 107% of the BT.2020 colour space – that’s over a billion colours and outpaces most conventional TV technologies!

If you’ve ever shopped for a laser projector in the past, you might remember how older long-throw projectors could often struggle to produce a really bright, crisp image onto your painted wall, or even onto a screen sold by a third party.

Fear not, as each Hisense Laser TV comes with what Hisense calls its ‘Ambient Light Rejection’ screen, included with purchase. The ALR screen has a specially coated surface designed to block glare from ambient light, while reflecting more of the projector’s light, so you end up with an incredible 3000-lumens image. That means it looks bright in almost any space.

Smart TV features are built in

Perhaps the most important thing about Hisense Laser TV is that it’s not just a projector, sitting there waiting to be fed content via HDMI (though of course you can do that too!). In fact, it’s a whole cinematic experience and a full smart TV as well – it even has an in-built TV tuner that works with Aussie channels.

Once you have it all set up and you get your head around how epically huge a 100 inch display is, you can sit back and use your Hisense Laser TV like any regular smart TV. The remote gives quick access to the VIDAA U4 operating system, all your favourite streaming apps are there (or can be downloaded to the TV), and you can enjoy all that functionality on your smartphone too via Hisense’s app.

An alternative is to pair your Hisense Laser TV with a high-end soundbar (such as Hisense’s own 5.1.2 channel U5120G model) or a surround sound system. Tip from us – make sure they have up-firing speakers to get the truly immersive experience. The combination of 3D audio with that huge display makes for a truly complete cinematic experience.

Why choose a Hisense Laser TV?

Hisense is a leading innovator in the consumer technology space, and when it comes to short throw projectors, the brand has over a decade of experience.

When it comes to the 2022 range of Hisense Laser TVs, there’s plenty to get excited about. The projector units are rated at 25,000+ hours of viewing time, the included smart TV functionality means you don’t need lots of extra boxes either, which fits with the Hisense Laser TV’s minimalist aesthetic (and yours!).

Only Hisense includes the Ambient Light Rejection screen with your Laser TV. It makes installation and set up easier, and it looks a lot better than most third-party screens. And maybe most of all… you can get a Hisense TriChroma Laser Cinema that throws a whopping 120 inch image! That’s proper cinema, in your own home.

Which Hisense Laser TV should I choose?

Hisense makes it easy to choose the Laser TV that’s right for you. If you want no-compromise entertainment – the biggest image, the best image quality and colour – then treat yourself to the 120L9G 120 inch TriChroma Laser Cinema (available from April 2022).

With nearly four times the screen area of a 65 inch TV, it’s Hisense’s top unit, and a showcase for everything that short-throw laser projection can do – made all the better thanks to the included ALR screen.

If you can’t quite find the vast amount of wall you need for a full 120 inch picture, there’s also the 100 inch TriChroma Laser TV Series L9G. This keeps the three laser modules for superior colour reproduction but trims the picture to 100 inches. Heads up: That’s still really huge.

You also get to choose from two kinds of Ambient Light Rejection screen – both offer maximum colour reproduction and a 150-degree viewing angle. The ALR Cinema Screen needs some user assembly, made easy with the automatic calibration which can be completed via your smart device.

If your Hisense Laser TV is going to be out in the living room or a space with large windows and lots of natural light, the ALR Daylight Screen is what makes this possible. It gives you maximum brightness and colour in daylight rooms.