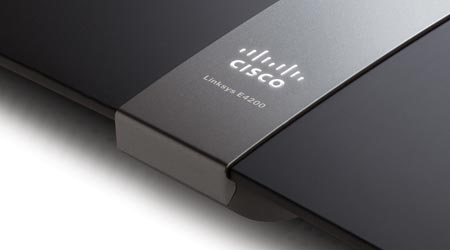 If there’s one device you’re probably not thinking of replacing, it’s your router. Typically bundled into the modem for your internet connection, there’s little reason to think of an upgrade until something breaks. But with more and more devices needing WiFi than ever, the router is one element of your home network that could very well need an upgrade, and that’s where the Linksys E4200 comes in.

At $299.95, Cisco is loading the E4200 with more functionality than the “free internet service” router downstairs ever had. It uses the high-speed 802.11n wireless transmission standard, has an internal antenna design that claims more reception throughout a building, support for more concurrent devices, a USB port for external storage, and four Gigabit ports for when hardwiring a computer is a preferred option.

Design-wise, the E4200 is easily the most unobtrusive plain-Jane router we’ve seen from Linksys in a while. The glossy plastic that normally sits on top is gone, replaced with a matte black finish that feels slightly rubberised.

Much like previous Linksys wireless routers, the antennas are hidden inside the unit, removing much of the clutter that normally protrudes a wireless networking device. Because of this, you’ll be able to fit the E4200 nearly anywhere, as long as you’ve got enough room to feed the power cable.

The rear of the unit is where all the action is, or as much action as a wireless router can house, anyway. Four Gigabit Ethernet ports with activity lights dot the back, sitting next to a direct line for the main internet connection cable, a reset switch, USB 2.0 port for adding storage, reset switch, power socket, and power switch.

There is no connection for a telephone or modem line, as the as the E4200 is just a router, not a modem/router combination. For most people, this probably isn’t the ideal piece of hardware as it still requires a modem to connect to the web. That said, in many situations, the modem/router combo might not have enough reach to spread a wireless connection around your home and an extra wireless router can prove a welcome addition.

Unlike many routers and home network switches, the activity lights indicating the status of various network functions are located round the back of the unit. This means you won’t have the problems of finding a place to conceal it in your room to avoid the distraction of blinking LEDs.

Many networking devices require advanced knowledge to setup successfully, but Cisco has focused on making its home networking easy it is to install and use with an easy-to-follow CD guide.

On our Mac, we had only to put the disc in, double click the “Setup” file we found, and follow the instructions. These come with pictures, so you have a guiding hand to take you through plugging it in, setting it up, and letting the router set itself up through an automated process.

If your network is a little more complicated and operates several routers – like ours does – the automated setup might not work and you’ll be asked for the router’s name and password.

Experienced users who want to go about setting up their router the good ole fashioned way by logging in via the IP address can certainly take this option, but networks with a few routers will almost definitely need to bypass the easy installation disc anyway. Our setup worked using the 192.168.1.1 address with the typical admin/admin user/pass combo.

If you’re in this group, the documentation in the box is limited, with the only real help coming from a PDF file provided on the disc. If you computer is a netbook or MacBook Air or any other model that lacks an optical drive, you’ll be a bit stuck for help, as no printed materials are provided. Given how many computers are abandoning the optical drive these days, Cisco would do better to supply the installation guide in a USB thumb drive.

The box of the E4200 proudly claims that it’s a “maximum performance wireless N router,” and we’re pleased to report that it lives up to those claims. Reception around GadgetGuy’s headquarters has improved from previous, and speeds from computer to computer have increased too.

While our connection seems to have proved, the results may be different in your building. At GadgetGuy, the majority of the computers remain in close proximity – horizontally and vertically – with the router. If your house is long and spread out, the results may be very different.

Our new network provides two distinct connections for use: one on a 2.4GHz band and the other on a 5GHz band. This offers a little more breathing room when lots of devices need to jump onto your network. For instance, computers needing to transfer lots of files were positioned on the 5GHz band so as to receive up to 450Mbps, while everything else was pushed to the smaller 2.4GHz band with up to 300Mbps.

Cisco includes an option to add network assisted storage (NAS) over a USB port found on the back of E4200, but you might encounter some trouble here. Only three out of five storage devices we connected worked. USB flash drives seemed to pose no problem whatsoever, providing a quick and easy way to add storage to our network, but only one of the three hard drives were picked up by the router. We couldn’t isolate the problem, and the lack of trouble shooting documentation didn’t assist matters.

At least the setup and configuration screens are easy to control and change, a feature that is a trademark of Linksys routers. The menu is fairly easy to work out, and a help system located to the side of the screen is always available to provide extra information when you need it.

The QoS or “quality of service” section looks like it’s improved on those in previous devices too, with bandwidth control, port control, and different forms of parental controls.

Before trialling the Linksys E4200, there were some problems with wireless at GadgetGuy HQ. Sharing the wireless spectrum between all of the devices we have here – phones, tablets, laptops, desktops, printers, video game consoles, and a couple of TVs – was frequently frustrating, and too much for our previous wireless router.

So has it changed with the E4200? Yes, the performance has increased, as has the reception between floors in our multi-level complex.

That said, we should make it clear that this isn’t the device for every home. The Linksys E4200 is a fine router offering robust performance across the two bands, but the lack of a built-in modem makes us wonder whether the $300 price tag is a tad rich – especially as it’s available from US sites for $180. Perhaps Cisco will have hit the nail on the head when it reveals a combo version. Until then, it’s a good upgrade choice for when you need better wireless performance in all parts of your home, not just your office.

Overall
Value for money
Performance
Ease of Use
Design
Reader Rating0 Votes
Plain design doesn't bring attention to itself; Excellent performance;
Setup and installation guide supported only by computers with an optical drive; No modem built in;
3.5