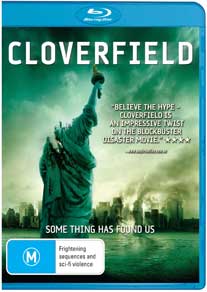 Every new moon or so, some bright spark filmmaker goes off down to Blockbuster, rents the seminal The Blair Witch Project and ends the drunken evening mumbling “I know! What if I did it like this but had a…”. Then, like a loyal mutt at his owner’s heels we, the movie-going public, obediently trundle off to the cinema and come out raving about the result.

So it happened with Cloverfield, wrongly hailed, in our view, as startlingly original and experimental, but rightly lauded for a surprising, uncompromising denouement of plot. Cloverfield avoids, at least, many of the usual sci-fi or monster movie cliches – this beast can’t be killed by water, or defeated by a simple virus uploaded from a laptop computer – and there’s an impressively bleak, inconclusive non-ending to the kids’ predicament. It’s just not as impressive as the pre-release hype would have had you believe.

The Blu-ray version includes an exclusive feature-length ‘Special Investigation Mode’ with added details about the film, director commentary, ‘Making Of’ featurettes, deleted scenes and alternate endings with commentary and more.