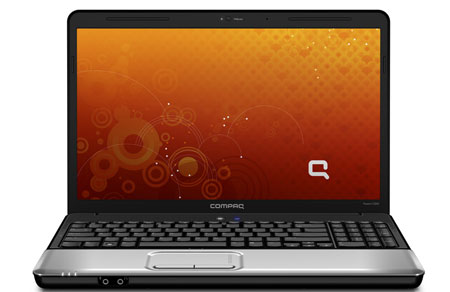 Far from being the stodgy notebook manufacturer of ages past, HP has started pushing some more progressive designs down the pike. The new Compaq CQ-120TU is one such design. It’s a little derivative – anybody who has seen the Toshiba Qosmio series will know what I mean – but it’s stylish nonetheless, with a look that’s suitable for both home and the office.

Much more importantly, however, it’s the price that sets this notebook apart. It has a recommended retail price of $999, and we’ve seen it sold online for $860 (at Dick Smith no less). At this price, it’s actually competitive with a number of Asus Eee PC models, though this is a full-size notebook running Windows Vista.

A standard-sized notebook with a 15.6 inch screen, the Compaq isn’t going to set anybody’s world on fire when it comes to performance. It has a relatively slow Celeron processor, a graphics chip that’s well behind the current leaders and a screen that’s rather limited in its resolution. It does have a good whack of memory, however, and runs Windows Vista Home very capably. It’s certainly powerful enough for most of your desktop applications like web browsing or word processing. Just don’t plan on playing 3D games on it.

While its performance is on the slowish side, its usability is certainly not. We were particularly enamoured of the keyboard – a board that rivals a desktop keyboard for spaciousness. We found we could type quicker on this keyboard than just about any other notebook we’ve encountered – you won’t need an external keyboard for this device. Combined with the bright glossy screen, the notebook is nearly perfect for word processing and email applications.

It comes with a relatively small (by today’s standards) 160GB hard disk and an 8x DVD-writer, and well as 802.11g wireless networking, which is a generation behind the current standard. There’s a card reader, which allows you to take flash memory cards out of your digital camera and plug them straight into the notebook, and a webcam that allows you to video conference with friends. A set of quality speakers and a surprisingly effective microphone make this a particularly good notebook for video conferencing.

Weighing 2.75 kg, the HP is neither particularly light nor especially thin. Most of its internal components are either entry-level or mid-range, and its screen lacks the resolution of many more expensive models. In spite of these flaws, we found ourselves quite taken with the Compaq CQ-120TU – its excellent keyboard and responsive glidepad made it one of the more usable notebooks we’ve encountered, and it’s not without aesthetic appeal.

It’s a low-cost notebook that’s great for business and communications applications, and as long as you don’t plan on playing 3D games on it it’s a very solid choice indeed.