CouchCoaster and TableCoaster – the nerd’s equivalent of the pocket protector 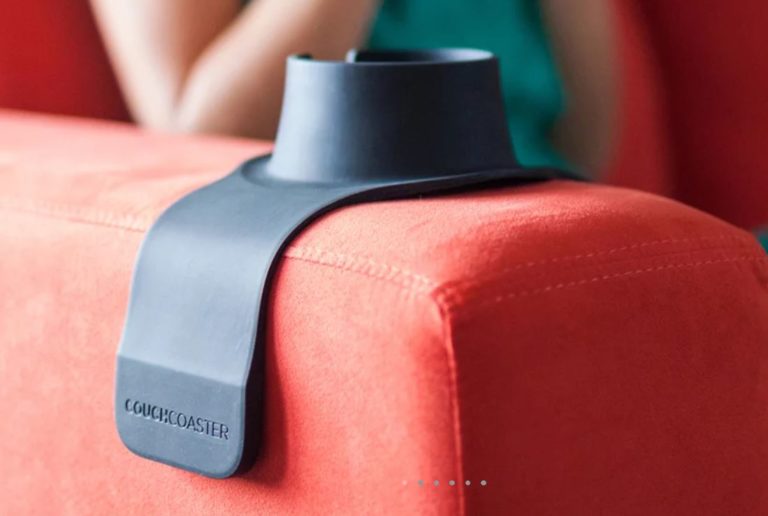 When GadgetGuy was asked to review the CouchCoaster and TableCoaster we said, “Sure, send it over”. After all, if it plugs in and there is an app for that, we will review it.

Sadly neither CouchCoaster nor TableCoaster plugin have an app, or steal your data, or listen to your conversation – they are as dumb as bricks. And that is why we like them – it appeals to the inner nerd.

Nerds are wont to drink beer or Coke (the liquid kind) and eat pizza. These devices are for them. They may even make a good Secret Santa gift!

Just launched on Amazon Australia lets look at what they do.

CouchCoaster is a weighty little beast that looks a little like it took its inspiration from the Flying Nun’s Cornette. In fact, I have it on good authority that the designing engineer watches BBC TV and likes Sally Field.

In any case, the weighted arms fit over most couch flat-topped arms from 140mm wide. The weights firmly hold down the top cup holder. We even tried tipping and hitting the drink can in it, and the centre of gravity was sufficiently low that it was safe – although we suggest those tall Red Bull rip-offs may topple.

It does not mind if the arms are slightly rounded, square firm or soft – as long as it has a good flat surface to sit on.

Overengineered to blazes, great quality and surprisingly useful to couch potatoes and nerds. Does what it says – no marketing BS in sight.

Obviously, after the British engineer finished CouchCoaster, he had a little time on his hands. Table Coaster is the same concept sans the silicone arm bits. It is made from an ABS-like material and has a ‘micro-suction’ base (sticky but leaves no residue) that can be repositioned many times – just give it an alcohol wipe occasionally to renew the stick! (Hey Mr Engineer – why don’t you market a pack of 10 for £10 – make a killing).

In fact, this may be more useful as you can use it without the companion couch. It works on any flat surface at least 110mm wide. That is a desk, in grey nomad moto homes, senior’s meal trays, bedside tables or even the grandkids high chair.

It is available in Jet Black or Glacier White for £11.99.

It may be useful to store other low centre of gravity items like TV remotes, pens, pencils, crayons or things that fall off your desk or couch.