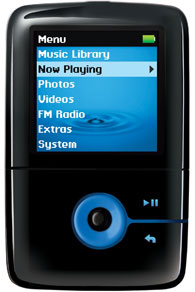 Creative’s Zen V Plus packs in a lot of music and video functionality into a very tiny body, although its rather pedestrian interface lets it down quite a bit. Still, with good audio and video quality and a decent price, it’s a good, but not great, player.

The first thing that strikes you about the V Plus is how tiny it is – at just 43.5 x 67.5 x 15.9 mm it’s highly reminiscent of a Tic-Tac case. It’s also the beneficiary of a rather striking visual design, with a solid swirl on the back of the player and a contrasting colour scheme – orange and black in our review sample – that makes it stand out from the rest of the mainly black music player pack.

The V Plus might look as though it’s using a scrollwheel and three buttons, but the orange circle is just that – a solid plastic circle with no playback functions. It surrounds a truly tiny joystick that’s used for most selection functions, with the Play and Back buttons used for everything else. Context-sensitive functions are handled by longer presses of the back button.

Setup of the Zen V Plus involves charging it – a supplied standard USB cable will do the trick for up to 15 hours of playback time – and synchronising files to the player. You can use either Windows Explorer, Windows Media Player 10 (or better), or Creative’s own MediaSource software. The install for the Creative software involves a lot of smaller applications which launch from MediaSource itself, including software for converting video files and transferring them to the Zen V Plus.

Even though the interface of the V Plus isn’t that complicated – essentially three buttons cover every task – we found the actual use of the player to be on the fiddly side. The buttons aren’t particularly responsive, and it seems like a design waste to have only two of them on the right-hand side and nothing on the left, and the joystick is exceptionally small, which is a problem for those with larger digits.

Conversely, once we did get files playing, we were exceptionally pleased with the V Plus; audio playback and battery life were good, and while the V Plus’ size means you’re putting up with a rather small screen, video clarity and colour reproduction, especially, were very good, even at that scale.

We tested with the 1GB version of the Zen V Plus (it’s also available in 2GB and 4GB flavours with different colour schemes) and noticed that our re-encoded videos on the V Plus tended to be much larger than those on other video-capable music players; this is especially a concern on a player with only 1GB of storage.

If you’ve got smaller pockets and want an exceptionally portable flash-based player, the Zen V Plus is a decent choice, although you’ll need to invest some time in getting used to its somewhat slow and quirky interface.