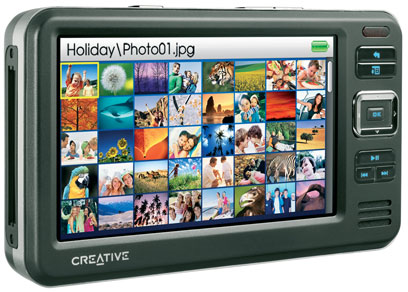 While Apple continues to play hard to get on the subject of a video iPod, rival Creative has already released the second generation of its portable media player, and this is it: the Zen Vision W.

It’s bigger, brighter and easier to use than its predecessor and addresses the most prominent criticism – viewing angle. But despite hardware improvements, the unit has a limited range of support for video codecs, with many of the more popular open-source systems missing out. And this can mean frustration when trying to upload an existing video collection.

Slightly larger than it’s predecessor, the Vision W boasts a proper 16:9 screen. The 4.3 inch display runs WQVGA, capable of 480 x 272 pixels. This puts it on par with Sony’s PSP gaming handheld, which has long been the benchmark for portable video.

The Vision W comes in either a 30GB or 60GB version. We tested a 30GB unit, which is slightly thinner and lighter than its bigger brother. As well as the built-in hard drive, there’s a CompactFlash slot for expansion cards. At first glance, the use of CompactFlash is an odd choice since the format is limited to high-end D-SLR cameras these days. But Creative does offer an optional slot converter that supports SD, MMC, Memory Stick and other formats.

The unit doesn’t go overboard with inputs and outputs. The only options are AV out, a headphone jack, and a USB socket for syncing with a PC. There’s a built-in mono speaker which is rubbish, and a microphone for the voice-recording functionality. Creative also includes an FM receiver, although it needs headphones plugged in to act as the aerial, which disable the rubbish speaker, so you will need external speakers if more than one person wants to listen to the radio.

The Vision W’s impressive hardware spec is unfortunately let down by its media support. The unit handles only Windows Media files, MPEG, basic DivX and XviD-SP. This may seem comprehensive, but if you already have a sizeable video collection gathered from, shall we say, a variety of sources, or even if you just like playing with more efficient open-source video codecs, you won’t be able to upload these files to the unit.

If you try to upload an incompatible file, the unit won’t even complete the transfer, but will give you the option to skip the file. So expect to spend some time re-encoding your video collection for Zen compatibility.

Audio support is likewise limited, with only MP3, WMA and WAV. As for photos, it’s JPEGs or nothing on this device.

Once you get everything up and running though, the superior display comes into its own. Colours are vibrant and movement is smooth, even in fast action scenes. Watching entire movies is comfortable, although the unit is slightly too large to be held in one hand and there’s no kick-stand for setting it up on a flat surface.

Recent crackdowns by the RIAA (Recording Industry Association of America) in the US have also lead to Creative updating the software in all its players to disable FM radio recording. Similarly, the Vision W can’t record direct from the TV, which is a real shame given the unit’s potential for relieving boring commutes.

The device supports Creative’s ZENcast software, which syncs the player with an assortment of video blogs and other free online content, making up for many of the players offline limitations.

Until such a device appears though, the Vision W will take care of all your basic, vanilla-flavoured portable video needs.