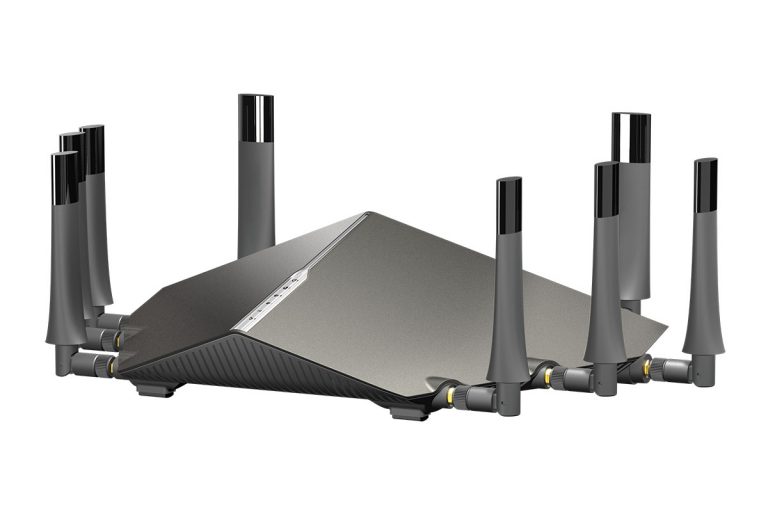 GadgetGuy Editor Ray Shaw in his first look at the new D-Link Cobra AC-5300 modem router said, “Deadly to slow internet”. Now we’ve managed to spend a bit more time with it. What does this $899.95 device give us?

(Update 14/3/21) Since the original review in November 2017 firmware and features have been updated. As a readers request we have revisited the D-Link Cobra DSL-5300 – still a current model – and ironically we are still using it to connect to the NBN FTTP).

The Cobra is well built and large. Eight antenna and a design that would not look out of place in Star Wars.

It takes up 400mm wide and 270mm deep, and that’s not counting the additional depth required for the cables. Despite the bold styling, I ended up installing it backwards, with the ports facing the room and the rather more attractive raked nose pushed into the wall. The antenna reach 125mm above the bench.

Internet connected devices are growing. Back in 2017 I had 15 devices in my home (and home office) via Wi-Fi, and more by wired Ethernet. If you start using too many of them at once, especially the Wi-Fi devices, communications start to slow.

It does everything you expect from a high-end modem: NBN as well as ADSL, DLNA support, Wi-Fi Guest access, “SharePort web access”, VPN and so on.

And while not related directly to data throughput, also speeding things up is the 1.8GHz quad core processor – faster than most modem/routers.

Most modem router set-ups are scary. The Cobra has an easy set up, with all default settings just right. If you use NBN FTTP you may need to enter that (information is on all NBN providers websites). simple wizard to guide you through setting new Wi-Fi and Admin passwords.

Being of a somewhat lazy disposition, and horrified by the thought of all the reconnections that would be required, I simply used the same SSID – Wi-Fi name – that I’d used on the Telstra modem. It works beautifully and saves setting up all your connections again.

Smart Connect may be a small issue to some IoT devices. It presents just one SSID and connects the device to the right band. Power down most devices, wait a few seconds, and then reapply the power.

Switch Smart Connect off if you have IoT issues and you can set individual SSIDs and passwords for each band.

The Gigabit Ethernet ports works as promised giving full-duplex speeds up and down.

But the real performance increase is today (March) when I have over 50 devices connected and still have router power to spare.

The D-Link Cobra DSL-5300 MU-MIMO Wi-Fi Modem Router is a great home router with fantastic Wi-Fi and the kind of web interface that doesn’t deter you from wanting to dig in and explore. I love it.