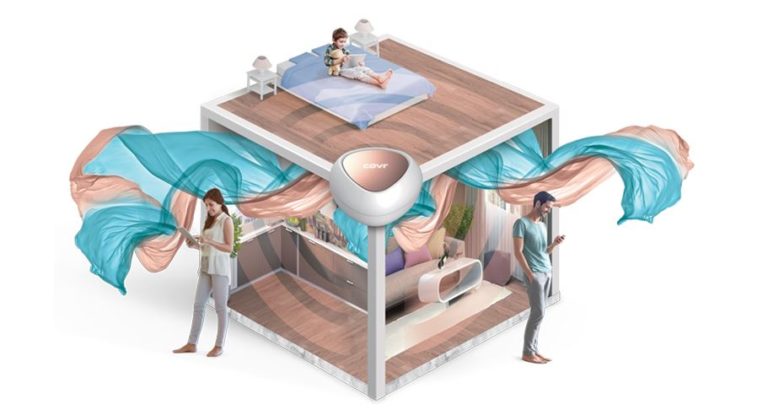 D-Link Covr-C1203 may be a solution to whole-of-home Wi-Fi by using three separate Wi-Fi routers that mesh together to provide Wi-Fi coverage up to 465m2 (approximately 20 x 20m2).

But there are so many caveats to the above statement that is it important to understand how mesh routers work.

GadgetGuy wrote a tutorial on Mesh, and you must read it before deciding to go mesh. Think of Mesh Wi-Fi as lots of Lilliputians carrying the load versus the raw grunt of Hercules and his mates. Grunt is good especially if you have a lot of Wi-Fi devices.

It is easy. You can use the D-Link Wi-Fi app for iOS or Android or use a PC/Mac browser.

In both cases, you plug in the main A unit to power and an Ethernet cable to your Gateway. It’s not a modem/router, so you need an internet gateway.

After that, a Wizard guides you through changing passwords etc.

Then you plug in the two satellites in places where you need to extend the range. The app/browser will tell you if it has a mesh signal – bad to good.

On that point its impossible to turn a bad or poor signal into a good one if the area where you need to extend the Wi-Fi is a Blackspot. Each device has a WAN/LAN port, so you can use Ethernet cables or Power Over Ethernet adaptors to get maximum backhaul.

We set the $399.95 Covr-C1203 AC1200 up in an area approximately 50m x 10m with the two satellite slaves about 10M from the master (total distance 30m). One was two rooms away with two gyprock walls and two built-in cupboards in between. It had a poor signal. The other traversed one wall but otherwise was in a large open area. It had a good signal.

But the catch 22 is that 99% of connecting devices have a maximum connect speed of 867Mbps (5Ghz) anyway. Its only later devices like the Samsung Galaxy Note9 or S9 that can take advantage of channel aggregation to get over Gigabit speeds.

Using a Note 9 we found (5GHz channel only)

This tells us that Cover satellites, regardless of signal strength to the base unit (back-haul) transmit at 867Mbp. This can be misleading – you think you have 867Mbps.

The AC5300, as expected will drop off accordingly the further you get from the unit, but back-haul speeds stay high.

Once you start loading each satellite (with a maximum shared of AC1200 half-duplex to share so let’s say 200Mbps to share each over three units), they run out bandwidth. Having one or two devices is fine – more than that becomes congested.

In layman’s terms, your device is sharing the same Wi-Fi bandwidth the node is using to forward your data to and from its master. That means you get only half the bandwidth you would be getting on a non-mesh network, or on a tri-band mesh network with dedicated backhaul.

The AC5300 may have dropped off regarding connection speeds to the devices, but it has over four times the bandwidth to share. Being tri-band, you could safely stream 4K, games, internet and more to multiple devices.

First, and this is the worst thing I can say, the Covr-1203 kit does not quite live up to the makers AC1200 speed or coverage claims. As a rule of thumb, the maximum data transmission speed will be around 200Mbps out of a node even if the link says it is 867Mbps.

That is because it is a dual-band (meaning it is half-duplex – it shares the upload and download speeds). A tri-band mesh solution is better if speed is an issue.

But considering 4K streaming is 25Mbps that is not bad. And consider that NBN on a good day and at the highest speed tier is 100/40Mbps (most have 25Mbps – no 4K for you) Cover will keep up with internet speeds.

Second, the coverage issue. If you placed these on a large, unobstructed square area 20 x 20m where each router was equidistant from each other and obtained a good signal they would cover the area nicely. D-Link is not lying – in theory the coverage per device is a 10 metres circle. By the way, we have the same issues with dual-band NETGEAR Orbi or Google Wi-fi etc.

Third AC1200 (in total) is insufficient if you more than a few devices. TV, streaming devices and games consoles are the biggest hog.

In the right place, it would be great. If you can keep satellites at no more than 10 metres line of sight from the main unit if you can reduce the number of walls and floors between then you have a lightweight network that extends the 5GHz distance out to 50m away – further than a single grunty AC5300 router could.

If like me you have thirty devices attached to the main router (TV, computers, NAS, tablet, smartphones, security camera’s, smart speakers, smart home devices, Blue-ray, Roku, Foxtel, printer … then Covr is not for you.

In that case, you would use a tri-band AC5300 Cobra that is whole of home enabled and AC1200 D-Link range extenders for a far better, far faster and far more expensive setup that allowed bandwidth hogs everywhere. Even better would be to use the D-Link PowerLine 2000 adaptors to deliver Gigabit over Powerlines to each range extender.

Or if mesh is what you need Covr now has the $499.95 COVR-2202-AC2200 that has that all-important tri-band dedicated back-haul. GadgetGuy not tested it but expects it to perform similarly to a NETGEAR Orbi tri-band unit.

A townhouse upstairs and downstairs where each node can be placed as close as possible to the main unit.

A small home where the main unit may be poorly located (as usually happens) and the extra nodes can help distribute bandwidth.

Rating a Covr or any dual-band mesh Wi-Fi is hard. In the right circumstances, they are a five-out-of-five. The problem is that compared to an AC5300 with wired Ethernet extenders they barely rate half that. Then they are barely half the cost!

So, we need to rate it as an AC1200 router with two range extenders for up to 50m line-of-sight.