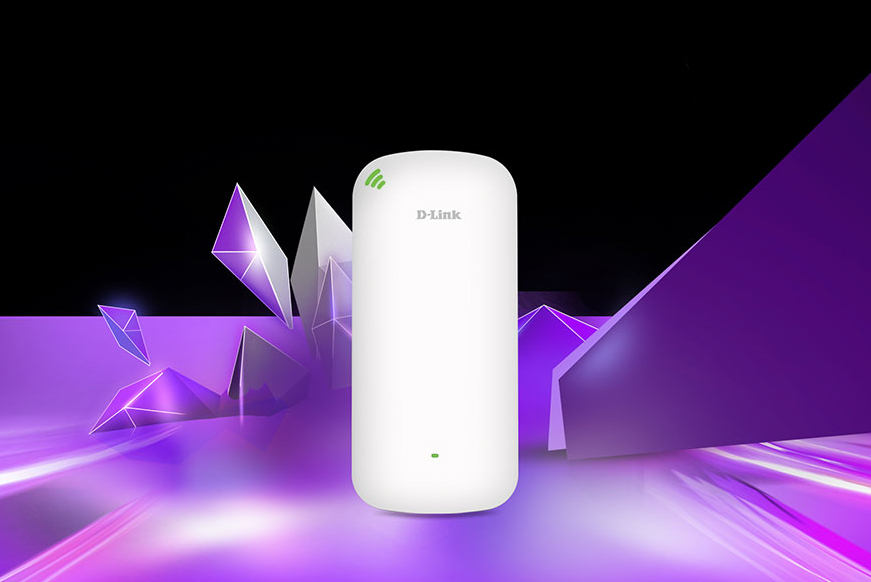 But it has a few little secrets – not the least is that it supports industry-standard IEEE 802.11k/v mesh, so it should work with any compatible AX router – and it does!

What is Mesh? A much used and abused term.

It should mean that the extender uses the same Wi-Fi SSID/password as the router and allows you to seamlessly roam (swap) to the one with the strongest signal. Done correctly, it spreads the same Wi-Fi signal around the home and reduces black spots. But there are so many ‘ifs and buts’ that mesh often does not deliver on the promise.

AX mesh comes in three backhaul types (how it communicates with the router).

We are not concerned about the DAP-X1860 being AX dual-band – we will explain why later.

You can read our Mesh Guide here to get a better understanding of the issues.

I like D-Link as a brand because it is widely accessible, reliable, and reasonable cost with excellent support – call it the Toyota of the network world.

The AX dual-band DAP-X1860 has 574Mbps (2.4GHz) and 1200Mbps (5GHz) bandwidth with separate 2×2 Antennas (4-stream). When used with a mesh compatible AX router, it uses part of the 5GHz bandwidth for backhaul. As AX uses technology that allows close to full-duplex speeds, you are not sacrificing much backhaul speed.

Note that AX Extenders only work with AX routers. You can’t add AX to an AC router.

We have learned a trick or three – the most useful is that you can use the same SSID and password as your existing router. It saves having to relink all your home Wi-Fi devices to the new router (as long as you turn off the old router Wi-Fi first).

Swapped it over, changed the SSID et voilà – all worked flawlessly. In fact, the two older AC DAP-1820 mesh extenders (connected via Ethernet backhaul) did not even miss a beat.

We noticed that the old AC3000 router ran out of 5GHz range at around 10m; the AX5400 5Ghz was quite good to nearly 15m. So much so that we did not need one of the older AC extenders anymore to achieve better, stronger coverage.

We were hoping the new AX DAP-X1860 in the master bedroom may get enough signal strength from the AX5400 router at the other end of the home. Using the D-Link Wi-Fi app (Android and iOS), we set up a Mesh network with ease. Scan the QR code, find the Mesh device and offer Wi-Fi or Ethernet backhaul. Easy. The DAP-X1860 then displays a signal strength from 1-3 bars – we had two!

Later, that signal had dropped to 1 bar (orange) in the master bedroom. The reason was perplexing but simple. With the bedroom door open, it got just enough signal from the router. With it closed (to keep the cat out), it did not.

This gave 1000Mbps full-duplex in the bedroom. No problems – the DAP-X1860 linked to the router over Ethernet in MESH mode – seamless roaming.

On that note, you can set up the router and extender to have either separate 2.4GHz and 5Ghz SSID or just one combo SSID. On the whole, the single SSID works well as the router and extender know which devices should be on which network. But some older IoT devices had issues connecting, so we set up the two SSIDs – home2.4 and home5 – all was well.

AX coverage and speed all over the house is impressive, and the network is stable.

It has a Gigabit LAN port. If you are using Ethernet backhaul, then this port is already in use. If you use Wi-Fi mesh, you can connect an Ethernet cable or Hub and split the signal to 5-8 ports. Remember, these all share the Extender bandwidth, so don’t put bandwidth hogs on it.

The extender can daisy chain to another extender via Ethernet cable. We could not test if it can use Wi-Fi backhaul to do this, but we understand a firmware update may soon enable that.

We only tested the 5Ghz band as 2.4Ghz has a lot further reach. 5Ghz devices switched seamlessly over – some of the older 2.4Ghz devices needed a power cycle. These figures are impressive and show the benefit of an extender for black spots.

Many brands of AX routers support IEEE 802.11k/v mesh. We have tested with Netgear and ASUS AX routers, and it supports Wi-Fi and Ethernet Mesh backhaul to these. We understand that brands including TP-Link, Linksys and the Xiaomi AX routers (review here) also support this.

If you don’t have a Mesh standard router, you can set it up as an Access Point with a different SSID and password. This works over Ethernet backhaul (full-duplex), or you may be revert to half-duplex, half-speed depending on the router.

The D-Link DAP-X1860 AX1800 Wi-Fi 6 Mesh range extender is a brand agnostic IEEE 802.11k/v Wi-Fi and Ethernet backhaul mesh extender. It adds up to 1200Mbps 5Ghz and 574Mbps 2.4GHz bandwidth to your home, which means 4K streaming and more in previous dead spots.

It is simple to set up and, well, a no brainer. By placing it approx. 10m from your AX router, you can add another 10-20m of a good strong signal. Using Ethernet backhaul, you can put these in black spots in multi-level homes or even outdoor garages and sheds.

It meets or exceeds all test parameters, so it starts with a pass mark of 8/10. Add to that straightforward set-up, excellent Wi-Fi AX throughput, D-Link’s local support and a three-year warranty.

D-Link DAP-X1860 AX1800 Wi-Fi 6 Mesh range extender
The D-Link DAP-X1860 AX1800 Wi-Fi 6 Mesh range extender is perfect for extending the range of a D-Link EXO AX class router using Wi-Fi Mesh (single SSID) Ethernet Mesh (single SSID) or as an Access Point (different SSID).
Features
9
Value for money
9
Performance
8.9
Ease of use
10
Design
8.5
Positives
Dead easy set-up via WPS or the app
Impressive signal strength and bandwidth
Can use multiple extenders
Should work with many brands of AX routers support IEEE 802.11k/v mesh
Negatives
Plugs into a power point but its width interferes with a double point
Needs to have power passthrough socket
AX1800 is fine for a few devices but take care with bandwidth hogs
9.1