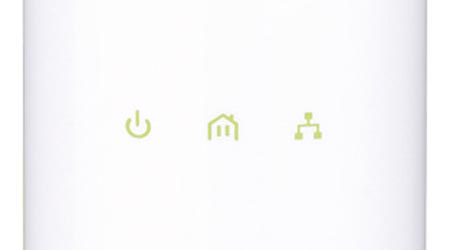 Your home’s existing power system has enough spare bandwidth to run a 200 megabit a second network alongside 240 volt power. All you need is a device to enable it – and here are two in the one packet!

The basic unit of D-Link’s updated PowerLine technology is this adaptor. It plugs directly into a 240V power outlet, and attaches to a PC or other network device via a traditional Ethernet cable. Maximum speed is 200Mbps, or about ten times faster than the very fastest ADSL2+ connection. The system is plug-and-play, but there are options to encrypt data and monitor performance, too.

The plug end of the adaptor provides power to the unit but also sends data over the power lines in your home. You plug in one adaptor near your ADSL or cable modem router, attach it to the router via Ethernet, then take the other adaptor to the room with your computer, games console or other network device in it. You then attach it to the device with another Ethernet cable (short cables are included in the box), wait for the green home icon to appear on the adaptor, and the network is ready. Simple!

D-Link recommends plugging the adaptors directly into the wall, as powerboards can degrade the network signal.

D-Link’s big challenge with these adaptors is of course the total saturation of WiFi in our devices. Everything from your phone to your games console has a WiFi adaptor, so isn’t it easier to just buy a WiFi booster for dead spots in your house? Well, the PowerLine adaptors are more than twice as fast as the quickest WiFi, so they’re excellent for streaming HD video from a PC to a PS3, for instance. And they’re not subject to radio interference.

Watch out though: if your house has a complicated power setup with multiple circuits for different rooms, set up could be tricky or even impossible: the adaptors need to be on the same circuit to establish a link.

This system is very easy to set up and it gives you Ethernet-like speeds without having to gouge holes in your walls and run a lot of blue cable everywhere. We do wish it could do gigabit speeds like Ethernet can, but 200Mbps is still plenty fast for the majority of today’s networking needs.