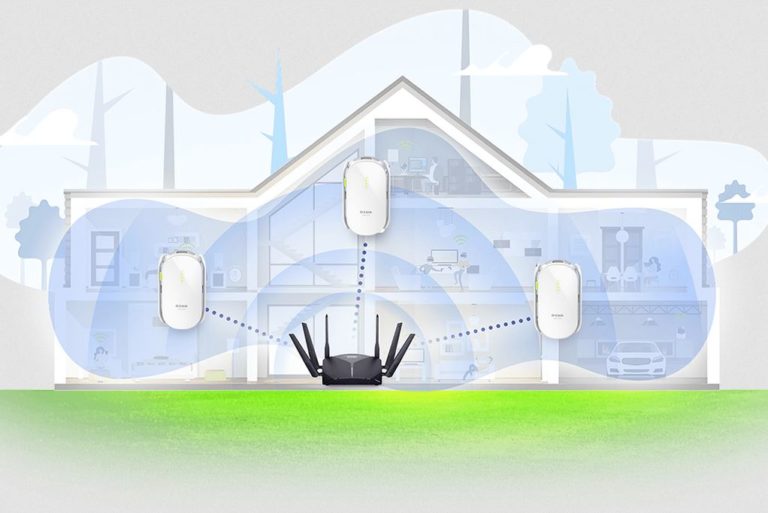 This is a story about how the D-Link EXO DAP-1820 Smart mesh extender cured Wi-Fi black spots in a typical modern single level home where any Wi-Fi simply does not work for oh, so many reasons.

We hoped that one or more D-Link EXO DAP-1820 Smart mesh extenders would cure Wi-Fi black spots. And it did with aplomb. But it did not do it in the way a typical mesh extender works. It did it even better once we added Ethernet backhaul. Let me explain.

A long story short, my daughter bought a home that is part of a duplex style development, and it is long and thin – about 30 metres long by 10 metres wide = 300m2 in all. Walls are cement block that stops Wi-Fi signal dead and getting a signal past the laundry/bathrooms etc. to the Master bed is impossible.

And as it typical the termination point for NBN (or in this case its still VDSL2 as it is part of the development) is at the front corner of the home (Master Bed) with an extension RJ11 phone point in the living room at the very back of the home (see the red dots below).

To complicate matters the TG-789 VDSL2 router supplied was in no way suitable for 300m2 coverage. It was in the Living area (or it could have been in the Master Bed).

This Wi-Fi router is dual Band router and rates 1-star in most reviews. It is fine as a gateway, to support phone and as a four-port Ethernet switch but atrocious as a Wi-Fi device. Using a Wi-Fi signal strength meter, it was -60/65dBm (fair) in the living room.

The 2.4/5Ghz signal dropped to -85/-115dBm (unusable) at the dining area. Effective coverage was about 50m2 – this reflects low cost and poor antenna design.

In reality, this modem was incapable of Wi-Fi coverage past the kitchen and courtyard, leaving over half the house in a black spot.

D-Link kindly loaned us some of its kit to experiment

We also took a NETGEAR AX8/RAX80 AX6000 router (review here) and EAX80 Wi-Fi Range Extender (review here) to see if raw Wi-Fi 6 horsepower by itself would cure the issues. Spoiler alert – it did not.

Issue 1 – The TG-798 router was hardcoded to iiNet VDSL2, so that precluded removing it. We could only connect a router/range extender via Ethernet or Wi-Fi.

We set up the NETGEAR AX8 linked to the TG-789 gateway. The far better antenna design gave strong 2.4/5Ghz coverage (-20/30dBm) to the Living, Dining, Bed 2, Bed 3 and Study. But both bands were non-existent in the Master Bed.

We then used the EAX80 Mesh Extender in the bedroom, but it could not get a strong enough signal on any band to retransmit. We could have used a set of Powerline adapters to supply Ethernet-over-Power, but the EAX80 can only have a single sign-on if it meshes via Wi-Fi. Otherwise, if using an Ethernet backhaul, it is an access point with a separate SSID sign-on.

Note: NETGEAR is working on the firmware to enable a single SSID over Ethernet, so this would be the choice for Wi-Fi 6 AX networking which is overkill for a single level, 2-person home!

We set up the D-Link DIR-3060 router linked to the TG-789 gateway. Like the NETGEAR AX8, the far superior antenna design gave similar strong coverage to the same area. The router is interesting as it has in-built McAfee protection for five years and end-point protection for two years – we will cover that later.

We placed a DAP-1820 mesh extender in the Master bedroom, and as expected, it was unable to get a strong enough signal to retransmit. So, we used a pair of DHP-701AV Ethernet plugs to get an Ethernet point there.

Resigned to having separate SSIDs we were delighted to find that the D-Link Wi-Fi app allowed for mesh via Wi-Fi or Ethernet backhaul. One word describes the elation – ripper! Apart from the business-oriented Synology AC2200 Mesh router (review here), this is the first time we have seen a flawless single SSID mesh-over-Ethernet backhaul in a consumer-grade router/extender.

So now we had AC3000 in the main living area (about half the house) and good strong AC2000 in the other half.

I have been using Powerline equipment since 2005, and it is 100% reliable and recovers quickly from power outages.

But there is more.

D-Link claims the DAP-1820 will work with most brand routers including the crap TG-789. So, we connected to it via the DHP-701AV. We re-ran the D-Link Wi-Fi software (for Android or iOS), and indeed it connected seamlessly with one SSID!

This means that you can now extend your current Wi-Fi network over Ethernet cable or Ethernet-over-Power, making the D-Link solution the best and most cost-effective.

And with D-Link’s powerline, you could also get Ethernet to multi-level homes and add DAP-1820 mesh extenders to cover these levels. We measured a strong solid 2.4/5Ghz signal out to about 20/10metres from the extender. It was more than enough to support a 2K Arlo Pro 3 security camera outside in the car park, and now daughter is looking at an Arlo Video doorbell as well.

Any device that connects downstream via Wired or Wi-Fi Ethernet router (e.g. via its Mesh Extenders too) has:

The second part is McAfee LiveSafe, and it has a two-year free subscription for unlimited installations on Windows, Android, Mac and iOS (features vary depending on OS) devices.

First, NETGEAR Wi-Fi 6 AX gear is great, but it is very expensive and over-kill for my daughter’s needs. I took it just in case the D-Link solution was not up to scratch.

D-Link assured me that it’s EXO DAP-1820 could use Ethernet backhaul. The pleasant surprise was that it supports single SSID Mesh over Ethernet as well.

In our tests, the EXO DAP-1820 achieved the same internet speeds as at the router enabling it to do 4K streaming. Impressive.

This article is really a combined review of the D-Link solution to curing Wi-Fi black spots. Given that the EXO AC30000 router, EXO DAP-1820 mesh range extenders and the DHP-701AV work so well together and are so easy to set up it is a 5/5.