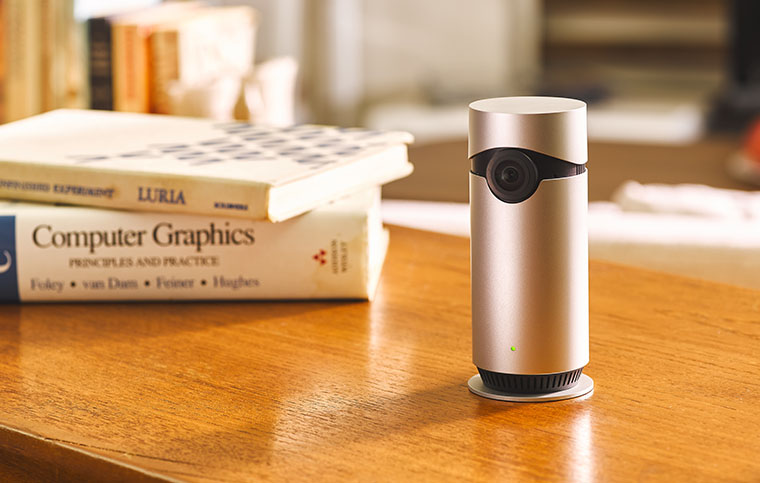 Networking products company D-Link has released a rather cool looking home monitoring camera called the Omna 180 Cam HD. Rather than being a plastic gadget bolted up near the ceiling in the corner of a room, it’s a stylish compact cylinder that can be freely placed in any room of the home.

It works with Apple HomeKit, Apple’s smart home and security infrastructure. In this rapidly growing ecosystem there are already gadgets ranging from smart electronic locks to security sensors to weather monitors. All can be controlled and monitored via an iOS app from wherever you are, even overseas. Part of the HomeKit feature set is easy setup. You just use your iPhone’s (or iPod Touch’s or iPad’s) camera to scan the accessory code on the device, and Bob’s your mother’s brother.

So adding a security cam to the mix is ideal.

The D-Link Omna 180 Cam HD looks pretty capable in addition to being stylish. It has a 180 degree field of view, and electronically corrects the picture distortion that such as wide view entails before streaming it to your iPhone. It also records sound, and if you want to creep out intruders, or give instructions to an errant babysitter, you can speak through it using the app.

(Tech stuff: it adjusts its video bitrate to work the best it can according to the available streaming bandwidth.)

The video will also work in the dark with an infrared range up to five metres.

Not there? Want to track down miscreants after the event? The motion detector can trigger automatic recording to a 128GB microSD card (which it’s up to you to provide).

Best of all, no fees to a security company.

You can buy it from today from the online Apple store in Australia for $329.95, and it will be rolled out to shop front Apple stores over coming weeks.