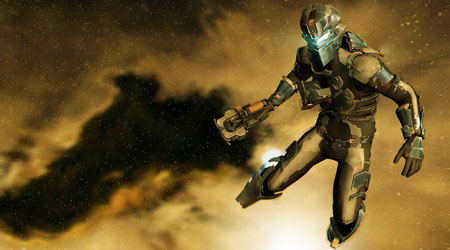 Dead Space 2 is the sequel to a superb action adventure game set on a spaceship that had undergone an unnerving and catastrophic sequence of events, resulting in an environment you could very reasonably describe as hostile. That much hasn’t changed this time around. You’re still Isaac, the hapless engineer sent to explore the place –a planetary city rather than a spaceship this time – trying to discover what in tarnation is going on, fighting the inevitable deluges of bad guys (Necromorphs) while wrestling with a considerable set of inner demons of your own. You’re not defenseless on your quest: on the contrary, you’re ‘armed’ with several unconventional weapons in the form of mining equipment which, happily, is also very effective in tackling the enemies you come across. And by ‘tackling’, we usually mean dismembering in quite hideous fashion.

Dead Space 2 showcases a fantastically-modeled environment, full of minutely-realized detail – not just the detritus in hastily-abandoned or systematically destroyed locations of ‘The Sprawl’, which is extremely well done, but right down to elements that you only glimpse incidentally, or quite literally on the run, such as realistically-textured cage struts in an elevator or the content of text logs filling in background on city personalities. This is all made doubly impressive when you consider that most of these characters are entirely subsidiary to your quest, if not actually superfluous, and triply impressive as you realize that there is obviously painstaking recreation of whole rooms that most players may never even bother venturing into.

The core of the game, as before, is the grisly extermination of the mutated inhabitants remaining as you investigate, a task that can get very grisly indeed. You really get a good sense of exploration, aided by all the door opening, the sequences of entering and exiting crawlspaces and even explicitly being shown the way you should be going by an electric-blue indicator if needs be, but it’s killing what you encounter that occupies most of your time. Surprises are frequent, woven masterfully into the game by the development team at EA, with seemingly-expired monsters rising dramatically to leap on top of you, or scuttling nasties covering what you thought was a safe distance in a shockingly small amount of time, using the cover of darkness along the way, which considerably ups the ante in terms of your stress levels and forcing panicked reactions. Scarce ammo and some of the creepiest sound effects increase the sense of desperation as you play through, and imaginative use of the ‘zero-G’ opportunities keep the gameplay fresh.

Dead Space 2 is an expertly-crafted horror adventure game that is not only the best in its league, but also one of the most enjoyable videogames in recent memory. There’s no avoiding the macabre nature of the game play, so if you have a weak stomach or are easily offended, this is not for you, but if you want an experience that peerlessly provides the escapist thrill of videogames while demonstrating tense storytelling, perfectly-honed game mechanics and well-judged difficulty curve with expert technical, sound and graphical implementation , Dead Space 2 is an essential purchase.