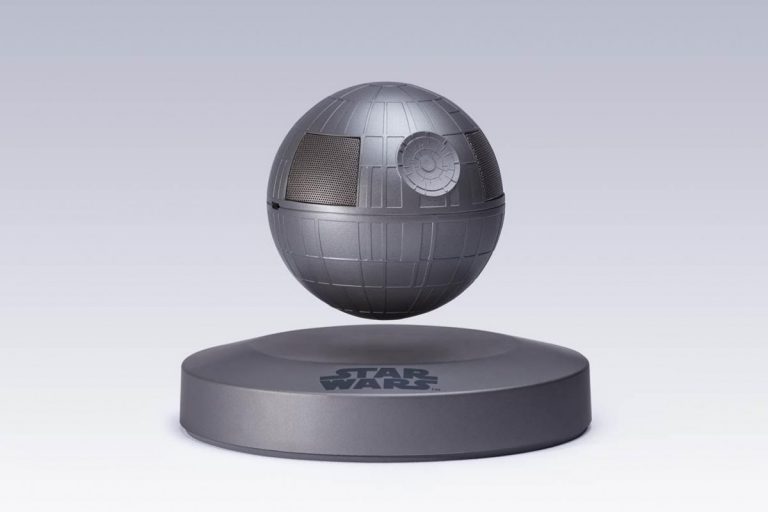 It’s rare to see something genuinely new in the way of Bluetooth loudspeakers, but we’ve got to admit it, the Death Star levitating speaker from Plox is new. As the name suggests, the speaker kind of floats in the air. And, well, it looks like the Death Star from Star Wars.

Plox calls it “gravity-defying” and claims that “this amazing piece of technology is not bound by the laws of gravity”. Of course, it actually is so bound, like everything is. But instead of being held up in the air by a stick or something, it’s held up by a magnetic field.

The two main parts of the Death Star speaker are the spherical star itself – which is 95mm in diameter – and the 143mm diameter base. Those are pretty compact dimensions for something which weighs a touch over a kilogram. The base requires 12 volts DC power (all the adaptors are supplied, of course), to power the built in electromagnet.

The floating speaker has a power output of five watts and is fed music by, of course, Bluetooth (version 4.1 with EDR). There’s one speaker driver built in. It fires upwards, with the sound released by a number of panels in all directions, giving it, as Plox says, “360-degree uncompromising sound quality.”

The Death Star itself is charged up by USB-compatible power, taking two hours. That, says Plox, is enough to deliver five hours of music.

Plox is an Australian company that sells a couple of Star Wars branded speakers along with some phone accessories.