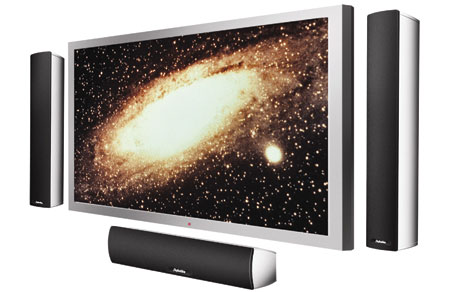 Once you start spending big bucks on a speaker system, it is almost taken for granted that you will have large, floorstanding front speakers and a massive subwoofer. But US firm Definitive Technology has long contested that with its compact speakers. One such is the Mythos range, combined with one of the company’s SuperCube subwoofers.

The Mythos range feature extruded aluminium enclosures and, mostly, passive radiators to enhance their bass performance. For the front left and right speakers I was provided with a pair of Mythos Six models, and for centre channel work a Mythos Seven.

These two models are almost identical, with minimal changes based on the Sixes being intended to stand upright and the Seven laid down flat. A 25mm pure aluminium dome tweeter does the treble, while a pair of 90mm bass midrange drivers, one located on each side of the tweeter, provides the rest. Further out from the centre, one towards each end, are the two 90mm passive radiators.

Wall brackets are provided and probably should be used, as discussed below.

For surround work a pair of Mythos Gem speakers were provided. The stated specifications were a little confusing, but it seemed that they were essentially

Mythos Six models with the ends truncated, thereby losing both some size and the passive radiators. Except that their two larger drivers were canted slightly to the left and right, presumably in order to spread the sound around a little. The SuperCube III subwoofer features a forwards firing 190mm driver with 650 watts of power backing it. The bass output is enhanced by the use of two 190mm passive radiators, mounted on the sides of the cabinet.

Once I had put the satellites on stands and placed the SuperCube III into my preferred subwoofer corner, I used the auto-setup facility on my home theatre receiver to get things rolling. This decided, very sensibly, that all five of the speakers were ‘Small’. Interestingly, it put the crossover frequency to the subwoofer at 150 hertz for the Mythos Six and Seven speakers across the front of the room, and 200 hertz of the Mythos Gem surround speakers.

I thought that was asking a bit much of the subwoofer, and in fact there did seem to be a bit of a hole in the mid-bass, so I wound the crossover down to 120 hertz for all five speakers, but still the hole remained. That’s when I moved the front three speakers from their speaker stands and placed them hard up against the rear wall. They needed to be there to enhance their bass output.

In fact, they sounded great. A subwoofer/satellite speaker system depends very much on the performance of the subwoofer, for it has more work to do than in most systems as it has to carry all the bass. Incredibly, the SuperCube III was up to the task, and never lagged or lacked.

There was one thing I must call a ‘weakness’, although I wouldn’t normally so identify it. Definitive Technology claims that the subwoofer will deliver ‘bass performance extending effortlessly down to 16 Hz.’ Sorry. It won’t. It won’t deliver 20 hertz to any significant level either. It did stretch well below 30 hertz, which is a mighty impressive performance for such a small unit. And had they not claimed more than that, I probably wouldn’t have even mentioned it.

Don’t let that sour note put you off, though. If this falls into your pricing range, audition this system even if you have in mind getting larger speakers. You might be surprised.