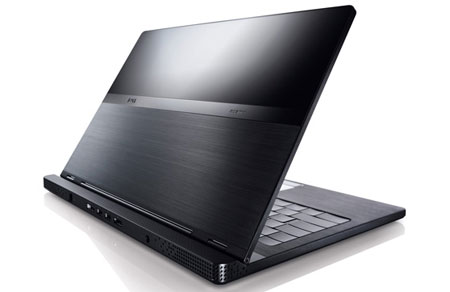 In a market increasing focussed on low cost netbooks, Dell has gone the other way, producing a “prestige” notebook computer that’s hard on the wallet but easy on the eyes. Available in either onyx (black) or pearl (white), the Adamo has a combination of matte and piano finish that looks fantastic – although you will undoubtedly spend a maddening amount of time cleaning fingerprints off the case.

And it’s slim. Much like the Macbook Air – a device with which it shares many similarities – the Adamo is super thin and extremely portable. At just one and a half centimetres thick and weighing only 1.8 kg, it will slip neatly into most carry bags and won’t weigh you down when travelling.

It’s not a performance notebook, however. Thanks to its generous memory allocation and solid-state hard drive it runs Vista well enough, but if you want it to do any heavy lifting you may be looking at the wrong notebook.

All Adamo models boast a glossy 13.4 inch screen that looks great – although its high reflectivity can make viewing it at an angle a little difficult. The Adamo also has a fantastic backlit keyboard, with very large, flat keys that make rapid typing a breeze.

As we mentioned, the Adamo doesn’t have a great deal of power under the hood. It runs on a low power Core 2 Duo processor, designed to ensure decent battery life but not really capable of higher-end tasks like 3D games. However, thanks to its plentiful RAM and its solid-state hard drive, the Adamo is very responsive for basic Windows functions, and is more than capable of keeping up with you when it comes to Web browsing and basic productivity applications.

The 128GB solid-state hard drive, meanwhile, is the major reason that the price tag for the Adamo is so high. A solid state hard drive isn’t really a traditional hard drive at all – it’s actually a bunch of flash memory (the stuff that’s found in SD cards and MemorySticks) that’s used instead of a regular platter-based drive. It has a number of advantages over a normal hard disk: it’s smaller, faster, uses less power, makes no noise, produces little heat and is less susceptible to jolting than a regular hard disk. But it’s also hella expensive. Hence the price of the Adamo.

The good news is that to expand the storage capacity of the Adamo, you can always attach an external hard drive. The Adamo actually has what’s called an eSATA port for you to do that. eSATA external drives are a lot faster than USB external drive, although they do tend to be more expensive and usually require mains power.

It also has a DisplayPort output for connecting the Adamo to an external monitor, and three USB ports besides. There are also audio outputs, an integrated mic and camera, and of course networking support built in.

The Adamo comes with Windows Vista Home Premium installed by default, and according to Vista’s notoriously inaccurate power meter, the battery will last for four hours before a recharge is needed. Dell claims a five hour battery life for the Adamo, but as always battery life will depend of how you use the notebook.

Dell’s new Adamo is that rarest of beasts – a Windows notebook computer that’s light, thin and looks fantastic. Although it isn’t massively powerful, it has enough juice to do most of the things you’d normally do on a notebook.

It certainly lives up to its billing as a luxury notebook, with the latest networking features built in and a top-of-the-line keyboard, glidepad and screen. The solid-state hard drive is particularly compelling – even if you can’t see it – because it makes the Adamo quiet, cool and fast to start up and load new programs.

But, of course, you’re going to have to pay a luxury price for this luxury notebook. We looked at the cheapest model available, with the SU3900 processor and 2GB of memory, and even then it was nearly $4,000. Upgrading the processor or the memory and adding an external optical disk can put you well over that amount. If you can afford it, however, it’s well worth the purchase price.