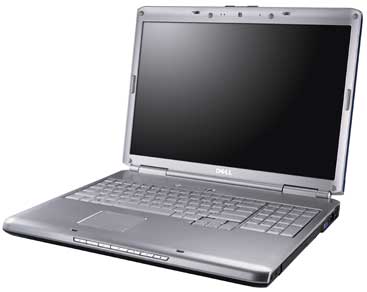 With the Dell Inspiron 1720, it?s all about the screen: the huge, glossy, high resolution screen. If you enjoy watching movies on your notebook, this is the device for you ? although make sure you get the high resolution option (which is what our review notebook had).

It should also do well in a home theatre environment. It?s not packed down with unique multimedia capabilities, lacking even a HDMI output, but it can pipe video to a TV screen over S-Video and it boasts a design that other notebook vendors would do well to emulate. For a start, it?s available in multiple colours (you choose when you buy), and even the notebook we reviewed, done in now clichÃƒÂ©d black and silver, has an appealing solidity and a style that will fit well with home theatre gear.

Much like the screen of the Toshiba Qosmio G40, the Dell?s 17 inch screen is capable of displaying full 1080p high-definition video without any downscaling or filtering. Very few notebooks, or even large LCD screens, can boast that capability.

Unfortunately, there?s nothing on version of the 1720 received by The Gadget Guy that can actually produce HD video. It lacked an HD DVD or Blu-ray drive (Dell does have a Blu-ray drive option, but it will set you back an additional $800), and doesn?t come with a digital TV tuner. On top of that, if you wanted to output your video in full resolution to a TV set, you?d better hope that the screen has VGA; there is no digital output.

The speakers, like the screen, are fantastic (as least for notebook speakers), producing the kind of audio rarely heard from portables. There is a discreet microphone and camera at the top of the screen for video talking and recording.

With Dell?s build-to-order model, you have various performance options with the 1720, right up to the top-of-the-line Intel Core 2 Duo processors. Our test system contained the very powerful T7500 CPU, along with NVidia GeForce 8600M GT graphics processor, which is probably the most powerful on the market today. Top it off with 2GB of memory and dual 160GB hard disks (320GB total) as we had, and you have a no-compromise desktop replacement.

The Inspiron?s keyboard is large enough to accommodate a full number keypad along with generously-sized keys, so getting things done should be a breeze. There are also multimedia controls on the front, which make controlling the notebook easier when the lid is closed.

There?s an elegance to the Dell that makes it feel like a premium product ? and it is. It makes excellent use of the latest notebook components, and can be a real powerhouse if you choose the right components.

That said, we can?t help but feel that Dell could have done more with it. Integrated television tuning, a remote control, a high-definition optical drive and HDMI output would certainly not have gone astray. We suspect that these will make an appearance in a Dell notebook in the near future, so if your needs aren?t urgent, perhaps its best to wait.