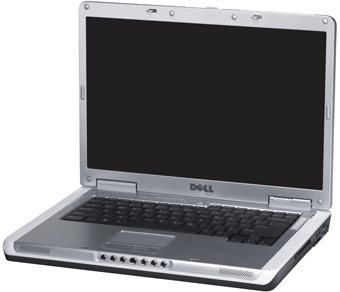 When it comes to notebooks and the car metaphor, there are sleek, stylish sports-coupes, and then there are dumpy, dependable family runabouts. The Inspiron 6400 fits most definitely into the second category.

This is a basic notebook that focuses on specific features and keeping the price low. It can be reconfigured when you buy it to beef up everything from CPU to hard drive size, but the bulky case remains standard.

The best feature of this machine is the display. With a 1680 x 1050 resolution, it’s a perfect environment for watching DVDs or even high definition content you may have downloaded (from a legitimate source, of course).

The CPU is a last-generation Core Duo (instead of the newer Core 2 Duo), but it is one of the faster examples of the older technology.

Hard drive capacity and included RAM are both standard at this price, and there’s a DVD burner as well. No wonder: there’s plenty of room for all this stuff inside the frankly massive case.

The ATI Mobility RADEON X1400 is a decent graphics chip that allows you to play most games, and is of course more than capable of running DVDs and other multimedia applications.

Dell is very conscientious when it comes to preparing a PC for its new owner. While many companies use a “ghost” Windows XP hard drive image that allows them to install quickly and painlessly, this is often at the expense of necessary security upgrades. When you get your Dell, it will be as up to date as it can be – given the pace of security releases for Windows though, more may come out in the time between when your new notebook is sealed in its box and when you unpack it!

Thanks to the solid but unspectacular spec, the Inspirion 6400 in this configuration is a solid but unspectacular performer. It certainly has no problem with DVDs or playing back music and movie files. Gaming is okay – you can get most games running, but newer titles will have to be run at lower detail settings and may still run a little slow.

There’s one aspect of performance that is rarely mentioned in notebooks, and that’s the machine’s durability. Thanks to the big, solid case, the 6400 is going to be able to take quite a few knocks and scuffs before it suffers, and that may be worth something to certain users.

The Inspiron 6400 is not a bad notebook by any means, but it does suffer in a market populated by more attractive, more capable machines that cost the same. The styling really lets it down, because of the thick case and kitsch silver trim.

The good news is that Dell doesn’t sit around waiting for its machines to become obsolete. Keep an eye out for an updated version of the 6400 featuring a Core 2 Duo CPU.

This notebook was reviewed in conjunction with three other models – follow the links below for those other reviews:

Some final thoughts on this round-up of four models?

It’s clear that Dell needs to look at the competition and see where everyone else is hitting on performance – the Inspiron was the only machine without a Core 2 Duo CPU. Fortunately Dell is likely to upgrade it soon.

The Toshiba machine has the typical high build quality the company is famous for, and good performance to boot. But the newcomers to the field do give you more for your money, and the fact so many parts are standardised now means having a solid warranty is less significant as a selling point. The “no-name” brands offer the same 1-year standard and 3-years extended as the big players anyway.

ASUS has a stylish and powerful machine that looks great and performs just as well. If you want a 15″ machine that tips the scales at less than 3 kg, this is definitely the unit for you. On the other hand, if you want as much computer for you money as you can get, MSI wins easily.

The fact it has a 17″ display at this price point shouldn’t be overlooked. What’s doubly impressive is that MSI manages to include the same CPU, a better graphics chip and slightly bigger hard drive as well! That makes the L745 pick of this litter, by a long shot.