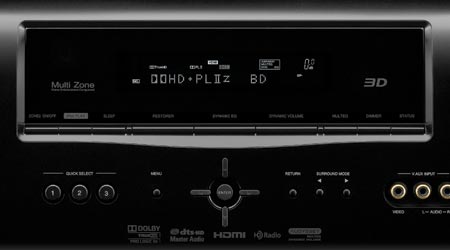 Over the last couple of years there has been a general trend in receivers – particularly at the lower price points – to reducing the number of old-fashioned connections, and increasing the number of HDMI sockets.

With its AVR-1911, Denon has certainly adopted this philosophy, producing a receiver with perhaps the least cluttered back panel I’ve ever seen. There are five HDMI inputs (one on the front), but only one component video input (and one S-Video). But no component or S-Video outputs. The receiver converts to HDMI output. There is a composite video output, but who cares?

On the other side of the coin – advanced features – it supports all audio standards, including Dolby Pro Logic IIz, and of course it passes through 3D video, while still making use of whatever Blu-ray audio standard is included in the signal.

It has a menu system, but with a rather utilitarian style that displaces the onscreen video content, rather than overlaying it.

The Audyssey automatic calibration and EQ did its job nicely, getting the receiver tuned up quick-smart for optimising the performance of the connected loudspeakers. First you have to decide how you wish to deploy the loudspeakers, because the surround rear channels can be set to run the DPLIIz ‘height’ channels instead, or to biamplify the front speakers. Or, and this was a bit surprising, to power a pair of Zone 2 speakers. This was surprising because there are no line-level outputs for this function. Zone 2 is only available using the built in amplifiers.

The video processing capabilities were strong. You can set the receiver to simply pass through the video unchanged (except, of course, converted to HDMI format in the case of analog inputs), or have it upscale to as much as full 1080p.

The unit also supports iPods out of the box. Just plug your standard iPod cable into the front-panel USB.