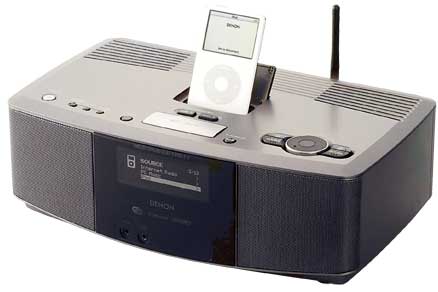 Denon’s S32 is a serious iPod dock with a serious price point – but for that kind of money, you do get a classically styled unit that feels solid, plays well and offers a lot of additional functionality. Like some of the other large docks we’ve looked at, you couldn’t accuse the six-kilo S32 of being particularly portable, although you could pretty easily slug it into a car boot and drive it somewhere.

The iPod Dock portion of the S32 is prominent in the feature set, and it’s prominent on the S32 as well, as the dock sits dead centre on the top of the unit. The S32’s remote is larger and more in line with existing home AV gear than the titchy remotes that come with most other docks; this gives the unit a very comfortable feel, and it’s easy to switch between modes of operation on the S32.

Apart from iPod playback, the S32 will also act as an alarm clock, Internet radio and music streamer (from PC or Mac). That’s handy if you’re the owner of a smaller-capacity iPod and just can’t get enough music.

Like the Jamo i200, there’s a separate output for an additional subwoofer, but in our tests we never particularly felt the need to apply one. The S32 sounded spectacularly good across most music genres, and frankly, for the asking price, we’d expect nothing less.