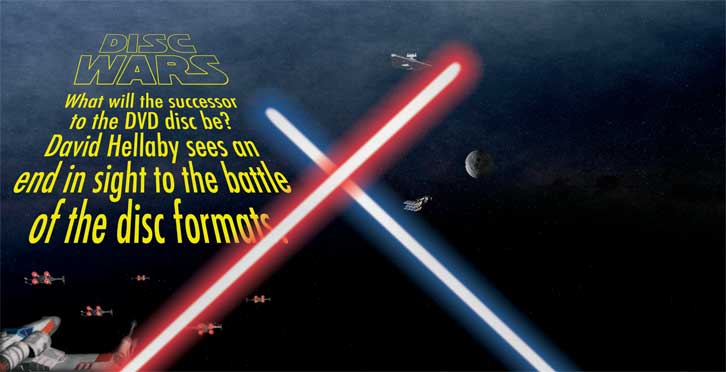 What will the successor to the DVD disc be? David Hellaby sees an end in sight to the battle of the disc formats.

Despite efforts earlier this year to reach a compromise, the two main combatants in the next-generation DVD format war – Sony and Toshiba – have yet to reach an agreement. From the way things look now, any chace of developing a unified format has gone out the window. And with devices due to appear on Australian shelves in early 2006, it’s worth knowing which format to back to avoid being the proud owner of a dead-end product.

While neither has ruled out the possibility of compromise in the future, Sony in particular, appears both determined and likely to win.

It was beaten by Matsushita way back in the Betamax versus VHS battle and lost out to Toshiba over the current DVD format, so you can imagine how resolute Sony is to not be beaten again.

Ironically, the one likely to lose the most blood is a third party that got between the two main combatants. Microsoft, which originally pledged neutrality in the war but at the beginning of October, suddenly changed tack and issued a joint statement with Intel supporting Toshiba’s HD-DVD format. Microsoft boss, Bill Gates, attacked Blu-ray saying it wouldn’t deliver what it claimed. He also talked up Toshiba’s ability to be first to market with its new format. But the next day Toshiba said it was delaying the launch of HD-DVD. Sony, meanwhile, is still on track to bring Blu-ray to the masses by including it in the PlayStation 3, which is due early in 2006. To add insult to Bill Gates – injury, two of Microsoft?s biggest customers – HP and Dell – have publicly criticised the move and pledged support for Sony’s Blu-ray.

In an even more telling move for Sony, Paramount Studios, which had formally been firmly in the HD-DVD camp, announced it would also support Blu-ray.

Microsoft also made a questionable move with its recent decision to go with the existing DVD format for its new Xbox 360 videogames consoles, while Sony went for Blu-ray. The upside is it’s cheaper to produce and the Xbox 360 will hit the market sooner, but leaving out a next generation DVD format gives consumers a reason to buy the PS3 when it’s out. This also increased Blu-ray’s desirability with the movie studios, who could see the benefits of having 30 million PlayStation 3’s in the global market within a couple of years, all capable of playing Blu-ray movies.

Microsoft and Intel also have huge investments in promoting a PC-dominated digital home concept where consumers can strip content off DVDs, store it on their home PC and stream it to all parts of the house. Blu-ray uses copy protection that prevents that. It was this copy protection that won News Corporations 20th Century Fox Studios over.

Blu-ray is now supported by seven of the eight major Hollywood studios; has the world’s two largest PC manufacturers in its camp and the backing of a host of consumer electronics manufacturers. On top of that, industry pundits are predicting the PlayStation 3 will eventually be as big a hit as PlayStation 2, which has sold around 90 million units worldwide since its release in 2000.

Sony has been on the ropes in recent years and desperately needs a victory to restore some of its former glory. For the moment, the victory appears tangible.

Toshiba might have beaten Sony in the past and it might be first to market with its HD-DVD format, but barring a miracle, it looks about to be thoroughly zapped by Blu-ray.