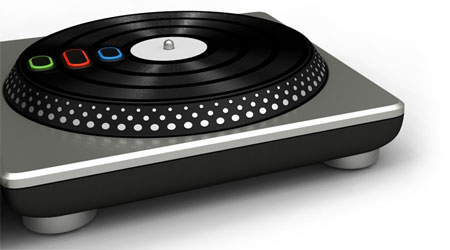 Music rhythm games have been riding a Tsunami of appreciation and excitement for several years now, and no publisher has leveraged that opportunity more than Activision, now responsible for about 3 million different iterations of the same, simple gaming principle that boils down to pushing coloured buttons in the correct sequence. But that Tsunami has now broken over the shores of consumer discrimination, it seems, and its power has been scattered to the winds, because people just aren’t buying as many music games any more, as recent poor sales of ‘Guitar Hero: Warriors of Rock’ demonstrates.

Which leads us to the latest game trying to help you pretend you’re a DJ, DJ Hero 2. I should claim a prejudice here, and that is that I think DJ-ing is about as difficult as blowing your nose, so I wasn’t well disposed to receiving this game to review at first. But if a game is good, it shouldn’t matter whether you’re the biggest fan or not so, keeping an open mind, I sat down to play with ‘beginner’s mind’, as the Buddhists say.

It was a bit of a revelation. DJ-averse and uncoordinated as I am, the excellent tutorial takes new players through a simple, step-by-step introduction to the controls and how best to manipulate them for a good score. It’s a good, although slightly intimidating, start, because there seems a lot to remember and once you start the main game, there’s no quick, easy reminder of what the symbols represent or require you to do; not even in the manual. But I was having fun before the tutorial ended, and a few ‘quick start’ plays later, selecting some of the (very few) tracks I actually recognised by name, the game had sucked me in. It was fun, it sounded good and I was being rewarded for not, at least, being totally crap. Clearly, developer Freestyle Games has been paying attention to what makes these Guitar, Band and DJ Hero games a success.

The CD deck peripheral that comes with the game is chunky and pleasing, making a convenient wireless connection to console and the controls well laid out. As well as that ‘quick play’ option, there’s an ‘Empire’ campaign game mode and, of course, one for online play.  But the strength of the gameplay is in being able to influence the music yourself, scratching, crossfading your and manipulating the sound to give it your own touch. A ‘Rewind’ function lets you try a segment again if you stuff up or even if you don’t and just want to replay to rack up the points. When you start feeling brave, you can up the ante a bit by increasing the difficultly level; move up to medium and you have to use the crossfader control a lot more than before, for instance, mimicking variations in the three separate tracks as they squirm around onscreen. Changing difficulty can be done ‘on the fly’ each time you take to the turntable, and in both directions, if you feel like making things a bit easier on yourself.

Most fun for mainstream audiences when played in short stints with family or friends, DJ Hero 2 is a neat, entertaining package that, mercifully, does not depend on you having to know the names of, or even know of the existence of, the idiotically self-titled DJ-Mixmaster-Peewee-Wonka-types down in the ‘hood.