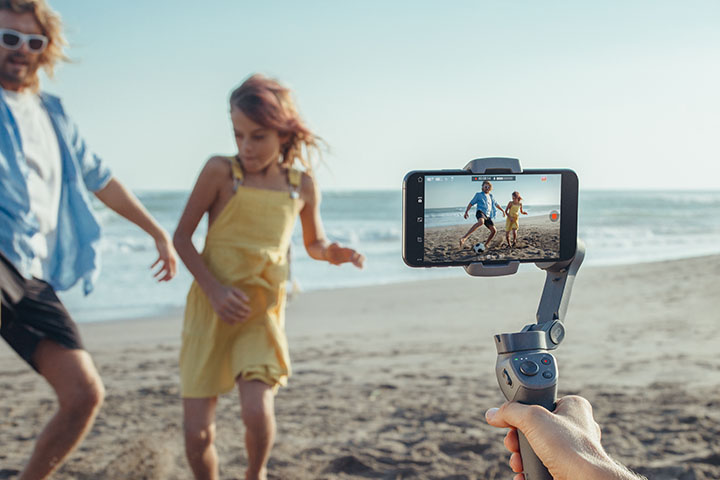 In 1975 Garrett Brown filmed his girlfriend running up the steps of the Philadelphia Art Museum. He didn’t use rails for a smooth tracking shot. He used his invention, the Steadicam. Today, you can do the same thing for well under $200 with your phone and the DJI OSMO Mobile 3.

The motors, arms and buttons of the DJI OSMO Mobile 3

Brown’s Steadicam is a complex affair with springs and weights and a vest to strap the whole thing to the operator’s body.

The DJI OSMO Mobile 3 is tiny by comparison, although heavier than it looks, weighing in at 405.9 grams. It needs to be fairly heavy because its arms are weighted to counterbalance the weight of a typical phone. (As we’ll see, you still need to place the phone properly for balance.)

Of course, you don’t have to hold the handle vertically, so the actions of the motors will change according to how you’re holding it.

There are five control buttons in total on the DJI OSMO Mobile 3. On the front falling naturally under one’s index finger is, I guess, the trigger. On the back are the power button, record button and the joystick orientation controller. The power button can also turn the camera between landscape and portrait orientation with a double tap. Finally, on the left side of the handle is a zoom slider control.

The DJI OSMO Mobile 3 is available for $159, and that includes USB Type-C charge cable, wrist strap and a soft pouch. Pay $30 more for the DJI OSMO Mobile 3 Combo set and you get a more solid carrying case and a small tripod which can screw on the bottom.

Naturally, it works with an app. Specifically, the DJI MIMO app (which also works with the DJI OSMO Action video camera). Note, just because this device and the action camera share a name doesn’t mean that you can use them together. The DJI OSMO Mobile 3 is intended for smart phones. I see that you can buy third party adaptors for the (ahem) GoPro, but that would still lose you a lot of functionality, since some of the things the Mobile 3 does rely on the phone’s own smarts.

There are a bunch of video options in the app, such as time lapse, panorama shot assembly and so on. And, of course, you can take photos within the app as well. But the main game is smooth, smooth video. That’s what I, um, focused my attention on.

So, how to use the DJI OSMO Mobile 3. Well, first you charge it up. The USB Type-C socket is sitting there on the handle, waiting. LEDs indicate progress. Then it’s time to unfold the DJI OSMO Mobile 3. One of the significant improvements over the previous model is that it folds up into a compact unit, probably less than half the size of the earlier one. So, you’re far more likely to take it with you.

But I will confess that I was quite puzzled for a while about how to unfold it, even though there are diminutive instructions printed on the device. The trick is that you have to just push through some moderately firm “clicks” to open up the pieces. My main worry was about pushing too hard the wrong way and breaking something.

But, really, once you’ve done it the first time you won’t have trouble the second. There are only three movements involved.

The trickier part comes next. You must balance your phone in the rotating clamp on the end. First you slide it a little this way, then that, while it’s held by the clamp in landscape mode. When it doesn’t tilt either way, then you rotate the phone and clamp so it’s in portrait mode. Then you slide the whole thing a little to the left and right to balance it that way as well.

In practice, it didn’t need to be perfect. But if the balance was too far off, the app would inform me of the fact and ask me to fix it. Fair enough. Yes, the motors have sufficient capacity to overcome some imbalance, but it will put excessive strain on things and likely reduce the responsiveness of the system in some directions.

I initially left my Huawei P30 Pro in its (slim) case, but that proved to be a problem. Its power key is not too far away from the centre of the right edge and the clamp kept triggering it when the phone was balanced.

But the clamp edges are V-shaped, so once I removed the case the power key could slide under there without being pressed. The same should apply to any inconveniently located control keys on any phone.

And then you just hold down the power key for a few seconds and DJI OSMO Mobile 3 comes to life. It defaults to maintaining orientation, and for someone not used to such things, it’s a weird feeling at first. The DJI OSMO Mobile 3 feels like it has a life of its own. You can override it, of course, fairly easily. Once you do that, the new orientation will be maintained.

You will typically change direction by a combination of physically moving the phone and mount and using the thumb-controlled joystick. That’s the real pointer control. It operated smoothly and quietly. Indeed, all the motors were utterly silent as far as I could tell, and all worked smoothly.

The DJI MIMO control app provides the camera app and it uses the processing power of the camera to control things. One of the coolest features is tracking. You point at a subject – say, someone’s face – and draw a box around them on your phone screen. It’s easier to do than it sound. Then the DJI OSMO Mobile 3 will work to keep the selected item in the frame. It’s great for walking around things to show different angles. Or for simply following your subject.

The app includes some internal stabilisation to keep things smooth. The DJI OSMO Mobile 3 can’t, by itself, do much about being jiggled directly up and down. What it does do superbly is maintain level and direction.

But remember, moderation is required. You can easily wrench it past its capacity of maintaining stability.

The zoom slider control worked nicely, with a useful speed. The double tap on the “M” key to flip the phone from landscape to portrait and back again was a very useful function. Apparently, that was done manually in the previous model.

But it’s not fool proof. The trick is not to be a fool. To get the most out of the DJI Osmo Mobile 3 you will need to practice – nowhere as near as much as with a Steadicam, but some. You will learn to hold your arm out a little and let it act as a spring or damper between your body’s up-and-down motions. And you will learn how to split your attention between your phone’s screen and walking around, sometimes backwards, so that you don’t trip over something.

Finally, you will learn the limits of movement of the phone while it’s mounted, and learn to anticipate those limits and move the grip before those limits are reached.

Garrett Brown used that Philadelphia and other footage to convince Hollywood. He replicated that shot of his girlfriend with Sylvester Stallone in the third movie to use his invention, Rocky.

And now in 2019 you can do the same kinds of thing, but at very low cost with the DJI OSMO Mobile 3.

It is available from the usual stores or directly from DJI here.

Overall
Features
Value for money
Performance
Ease of Use
Astonishing capabilities
For a remarkably low price
Compact
Can't think of anything
4.6