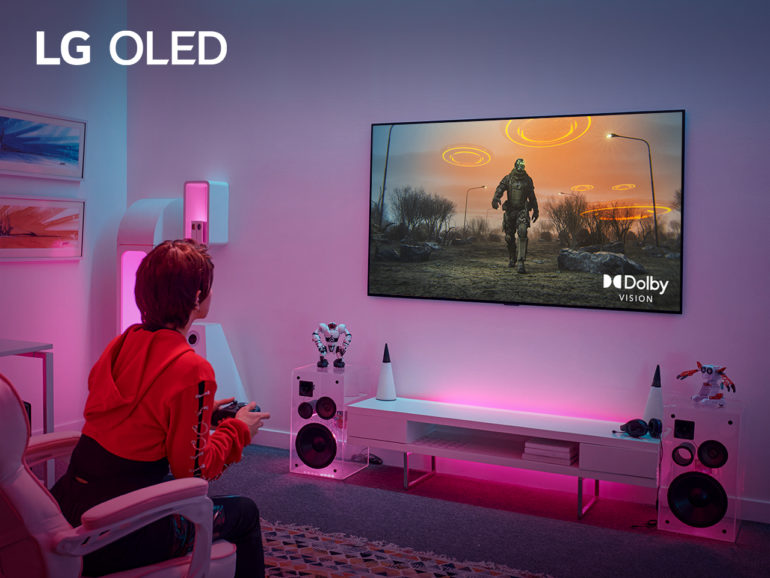 Dolby Vision 4K@120Hz refresh for games consoles is coming first to selected LG 2021 OLED TVs. It will be the first to support this and is perfect for the next generation of games consoles, including the Xbox Series X and hopefully the PlayStation 5.

It is not an easy feat. LG’s C1 and G1 series OLED are first. The panel must perform flawlessly at a 120Hz refresh. The processor and Dolby Vision decoder chips need to handle twice as much work (see later*) and the entire experience flows via 48Gbps HDMI 2.1 eARC and the games consoles that support this. Gamers generally regard LG OLED TVs as the best TV gaming panel due to exceptionally low lag.

It is coming via an over-the-air firmware update 03.15.27 that reaffirms the 4K C1 and G1 Evo OLED are the TV of choice for gamers – well, everyone, really. The firmware will eventually roll out to its 8K Z1 OLED, 8K Mini LED QNED99 and 8K NanoCell NANO99 (not in Australia).

After that, existing 2020 CX and GX models may receive the update. LG is testing its other models and will update the firmware if possible. LG’s announcement is here. You can get details and prices of LG’s 2021 TV line-up here

Xbox One consoles support HDR10 and Dolby Vision for apps and only HDR10 for gaming – that won’t change. Xbox Series X and Series S will be the first consoles to support the Dolby Vision 4K@60/120Hz format with dynamic metadata (frame by frame adjustments) for gamers. Microsoft is yet to formally announce support for the new refresh rate (no firmware update yet), so it may be some time before the stars align.

* It appears that both the TV and the console need to share the Dolby Vision processing load to achieve the required low latency. Details are scant, but the console and TV processors will co-process. That is why it is not generally retrofittable to other TV brands and models.

Sony PlayStation 5 is yet to confirm anything. Gamers are desperately hoping it will match Xbox. Still, there is a strong possibility that it will only go to Dolby Vision 4K@60Hz and introduce Tempest Audio, its object-based 3D audio format. It claims to be better than Atmos as it supports more audio objects. Sony controls its PlayStation ecosystem, so it can do this – who knows.

New gaming features with the firmware

The firmware introduces another new feature that elevates the LG gaming experience to a new level.

Available on LG TVs equipped with Game Optimizer, Game Dashboard is a new floating onscreen menu similar to the head-up display (HUD) found in many games. The feature lets users quickly see the TV’s settings and allows them to switch between different genres – Standard, FPS, RPG or RTS – without pausing the action. The dashboard also shows the status of other modes such as black stabilizer, low latency, and variable refresh rate (VRR). Users can access more options via the Game Optimizer directly from the Game Dashboard.