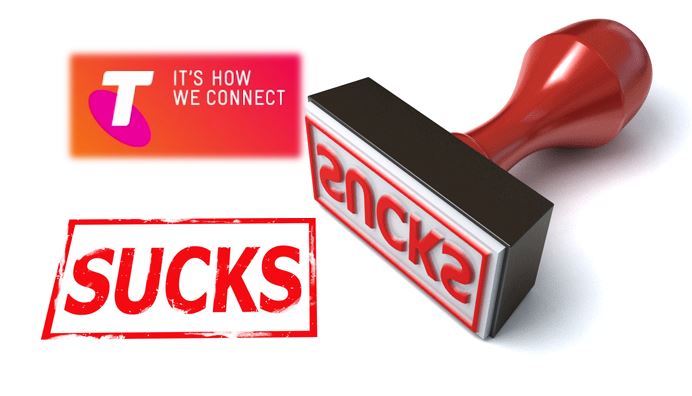 Don’t let Tel$tra provide shoddy NBN service. Telstra may have to refund up to 180,000 FTTN (fibre-to-the-node) customers everything they have ever paid for the service. Why? It may not have been able to deliver the promised speeds and truth in advertising is all.

I have had a gut full of Tel$tra – lies, outright lies, and no one cares – over my 26 months as an FTTN customer. You can read more about this here and if you are one of the FTTN customers I suggest you do! Don’t let Tel$tra provide shoddy NBN service.

In 2017 Telstra was ordered to refund about 42,000 customers that were not receiving advertised speeds. You think it would have learned by now but trying to change Telstra’s culture is like trying a handbrake turn on the Titanic to avoid an iceberg.

No, Telstra went on to deceive another 180,000 customers blithely taking their money (or giving a speed upgrade for free – that usually did not work – as penance), and it never delivered on its previous ACCC undertaking to monitor speeds.

ACCC chairman Rod Sims it all comes down to education.

“Telstra has upgraded people and not checked whether the speeds that people were put to could be delivered.”

Telstra was wrong to take the money – no ifs, no buts – it is their responsibility to provide a service

As there is no speed data history when a customer signs-up, all CSPs (carriage service providers) must monitor new sign-ups to FTTN services after their first month. Based on that data, it must adjust a plan to the speed the line can support.

Well, Telstra once again has f’ed up, and the ACCC is insisting Telstra offer compensation to those customers – in this case, 100% of what they have paid for Telstra NBN.

“Telstra’s failure to carry out the speed checks meant that customers were not informed on whether they were getting the maximum speeds promised under the upgraded NBN plans. It also meant they were not offered options to address slow speeds, such as exiting their contract or receiving a refund.

“Telstra has since committed to contacting all affected customers and refunding those who have been paying for the higher speeds but not receiving them. It will also proactively move consumers to a lower speed NBN plan if they are not receiving any benefit from being on a higher speed tier NBN plan.”

Hmmm – haven’t contacted me yet!

How do you know if you are getting the speeds you paid for?

This applies to all CSP’s. The easiest way is to buy a Fing Box (Australian website here and manual here) for $169 plus freight. BTW: If you find your speeds are not what you are paying for then demand your CSP reimburse you for this as well.

Fing Box monitors speeds and outages throughout the day. It also monitors the devices attached to the home network and stops unauthorised ones from getting in. As a bonus it has parental controls, can alert you who is coming or going, identify bandwidth hogs and much more.

Pro: Plug and play – no expertise required apart from setting up an account and a few parameters.

Con: Continually monitors for outages but only automatically tests speeds six times a day – still this is the best idiot-proof indicator you can buy.

Or if you have Windows and a good batch file knowledge you can run Ookla Speed Test (command-line version) automatically at intervals you select. Email [email protected] for instructions.

Pro: Extremely accurate and Telstra cannot argue
Con: Data comes out in plain text and needs to be imported into a spreadsheet for analysis

First, report any outages to your CSP call centre and obtain an incident number. Also, record the time you spent, including waiting for an operator to hanging up.

If a pattern emerges (regular outages or regular slow speeds) and your calls exceed say five times immediately go to the Telecommunications Ombudsman and make a complaint online. All you need is the latest incident number and provide some contact information – it is simple, and you should do it sooner rather than when your blood pressure is out of bounds.

Now armed with a TIO complaint number wait until the issue happens again and immediately quote the number to your CSP call centre and request that the matter be escalated to a dedicated, first-line complaints officer. That person will be your contact from there on in.

At that time, you need data – cold hard facts like I had – but frankly, I am not sure how many complaints officers really understand it. Their role is to close the complaint quickly, or they look bad to the TIO and shareholders.

All you need to do is keep saying to your CSP, “I pay for XX/XXMbps and reliable service. Fix it.”

Don’t tolerate threats of charging to send out technicians “if it’s your fault” because it is usually not, demand replacement modems, demand discounts until its fixed, and if you are unhappy go back to the TIO and update your existing complaint online.

If this seems to be too much get an advocate to help. This ‘geek’ needs to understand IP and testing and an excellent place to start is your local computer store or a geek-to-you service. If you are right, you can demand the CSP pay for the geek as well.

And remember that this is nothing to do with NBN – you buy it from Tel$tra, and it must own the issue.

Update to Trials and Tribulations with Telstra

After 18 months and hundreds of wasted and frustrating hours, Telstra finally fixed my FTTN NBN, refunded 26 months of charges and presumably copped a TIO fine. Well, the internet still drops out occasionally, but a new issue has emerged – slowing speeds from 95Mbps to 75Mbps to 65Mbps… Oh well, take a blood pressure tablet and start again.